Avi Gilburt is founder of ElliottWaveTrader.net, a live trading room and member forum focusing on Elliott Wave market analysis. Avi emphasizes a comprehensive reading of charts and wave counts that is free of personal bias or predisposition. He is particularly known for identifying a standardized method to trade waves 3-5 with extraordinary accuracy once waves 1 and 2 are in place. This method, which we call "Fibonacci Pinball," has been called by some as "the single most useful addition the Elliott Wave lexicon" and "one of the most profound discoveries in EW analysis."

Before retiring from his legal career, Avi was a partner and National Director at a major national firm. During his legal career, he spearheaded a number of acquisition transactions worth hundreds of millions to billions of dollars in value. So, clearly, Mr. Gilburt has a detailed understanding how businesses work and are valued.

Yet, when it came to learning how to accurately analyze the financial markets, Avi had to unlearn everything he learned in economics in order to maintain on the correct side of the market the great majority of the time. In fact, once he came to the realization that economics and geopolitics fail to assist in understanding how the market works, it allowed him to view financial markets from a more accurate perspective.

In September 2011, Avi co-founded ElliottWaveTrader.net in conjunction with Richard Hefter and AdviceTrade.

Since Avi began providing his analysis to the public, he has made some spectacular market calls which has earned him the reputation of being one of the best technical analysts in the world.

As an example of some of his most notable astounding market calls, in July of 2011, he called for the USD to begin a multi-year rally from the 74 region to an ideal target of 103.53. In January of 2017, the DXY struck 103.82 and began a pullback expected by Avi.

As another example of one of his astounding calls, Avi called the top in the gold market during its parabolic phase in 2011, with an ideal target of $1,915. As we all know, gold hit a high of $1,921, and pulled back for over 4 years since that time. The night that gold hit its lows in December of 2015, Avi was telling his subscribers that he was on the phone with his broker buying a large order of physical gold, while he had been accumulating individual miner stocks that month, and had just opened the EWT Miners Portfolio to begin buying individual miners stocks due to his expectation of an impending low in the complex.

One of his most shocking calls in the stock market was his call in 2015 for the S&P500 to rally from the 1800SPX region to the 2600SPX region, whereas it would coincide with a “global melt-up” in many other assets. Moreover, he was banging on the table in November of 2016 that we were about to enter the most powerful phase of the rally to 2600SPX, and he strongly noted that it did not matter who won the 2016 election in the US, despite many believing that the market would “crash” if Trump would win the election. This was indeed a testament to the accuracy of the Fibonacci Pinball method that Avi developed. 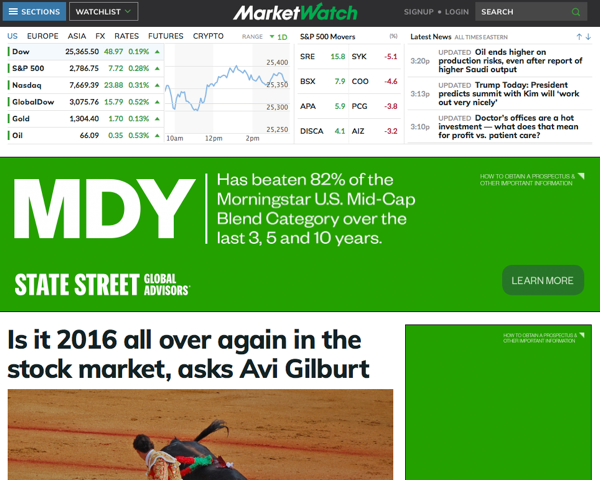 See Avi's article on MarketWatch from Jun 11, 2018 (in which he called for a year-end global melt-up) highlighted as the top home page headline that day.

Avi is a popular speaker at financial forums and conferences in the U.S. and internationally, including The Traders Expo and Prospectors & Developers Association of Canada (PDAC) Conference, and widely syndicated on sites including MarketWatch, TheStreet, Seeking Alpha, Nasdaq.com, Forbes and more. He has been the #1-read metals analyst for most of the 6 years he has been a contributor on Seeking Alpha, and is consistently among the top-followed contributors to MarketWatch.