Historically, Gold Has Been A Poor Inflation Hedge

Gold is often touted as a great hedge against inflation, but it is not. If we look at historical data, its record has been spotty.

A good inflation hedge would generally rise along with the rapid growth in consumer prices. However, gold has yielded negative return during some of the highest recent inflationary periods in the U.S. Let us take a look: 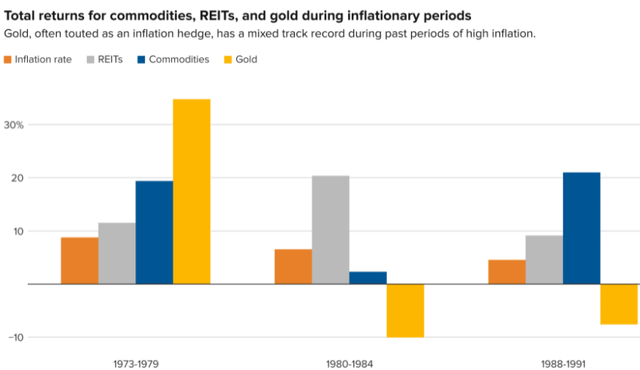 More important than the above, gold's correlation to inflation has been very low at 0.16 over the past half-century. A correlation of 0 means no relationship, while a correlation of 1 means they move together.

The low historical correlation would make gold a poor hedge against inflation.

In general, silver, commercial metals (such as copper, iron ore, steel, aluminum), oil, and agriculture commodities are much better hedge against inflation.

If we dig deeper in the past on why gold under-performed in periods of high inflation, we see that this happened during periods of recession or periods when cash and liquidity were scarce in the system. Today we have the exact opposite. The economy is booming and the system is flush with cash.  Furthermore, gold is cheap relative to its historical norms. In fact, gold has returned almost zero percent over the past 10 years, and even negative returns relative to inflation. Today, it offers a good entry point for investors.

Therefore I believe that gold would be a good hedge against inflation this time around. If you noticed, the price of silver and gold have both soared on Thursday and Friday. If you are interested to hedge with gold and silver, I would suggest you invest in the miners rather than the commodity itself by buying the following ETFs:

Note: If you plan to buy the above ETFs, it is best to consider them as long-term investments. The technical picture for gold and silver looks very bullish, but there will be volatility, and the prices will not go up in a straight line. However, I believe that the rally will be very strong through the year 2022.

HDI, described as the #1 service for income investors and retirees, offers a “model portfolio" targeting a yield of +9%  Learn more here.