As I noted over the weekend, in the most bullish structure for the GDX, we “should” have remained over the 24 region to maintain a strong 3rd wave count off the March lows.  Today has struck a stake into the heart of that potential, and has placed the GDX in a precarious position.

My alternative count for the GDX has been looking for a c-wave down in a more protracted 2nd wave down to the 20-21 region.  However, in order to see a c-wave down, we “should” have developed an impulsive structure off the highs.  Thus far, the initial move down was overlapping and not what I would confidently consider the start of a c-wave down.  So, this leaves us in a precarious posture, as I noted earlier.

Now, I know some of my fellow analysts are considering the high recently struck in the GDX as the top of a 5 wave move.  But, the issue I have with it is that the high was struck into an a=c target, which most often denotes a corrective rally.  It is for that reason that I wanted to see the .618 extension of that rally hold so that I can continue to view it as an impulsive structure.   But, Fibonacci Pinball suggests that once that .618 extension breaks resoundingly, the greater probabilities shift towards that rally being a corrective rally.  For this reason, I am viewing the yellow count now as a much stronger potential.  And, if I was not expecting the heart of a 3rd wave higher to take hold based upon the larger degree structure, I would probably be shorting aggressively based upon the recent action.

However, I am not shorting aggressively, but rather have my positioned hedged again, that is, as of last week before I took off for the Passover holiday.  Should we see a move over last week’s high, then I will likely be lightening my hedge load once again.

Moreover, I will note that if we can see a higher high made in the GDX in the coming week, then I can consider the pattern as a leading diagonal up for a wave (i) as modified on the daily chart.  Yes, I know this has gotten more complex than I had wanted, but I am trying to maintain an open mind to the potential I am seeing in the market.

As far as silver, it really counts best as a wave 2, with the a-wave of that wave 2 having completed.  That means that I would prefer to see a b-wave rally take hold in the very near term to solidify this potential, and as long as we remain below the prior high, then I would expect another leg down in a c-wave to complete this correction.  Ideally, we should remain over the 17.50 region to remain strongly immediately bullish.

GLD seems to hold the same posture as silver, as I would prefer to see this as a wave (2) in GLD, but, it too can be a smaller degree 2nd wave consolidation as well, as per the yellow count.

What all this means is that we are likely going to remain in a pullback as I expected, which also means that we will not likely set up to break out until the May time frame, which seems to be in line with prior expectations as well.

But, for now, I will add again that I am uncertain as to how GDX will play out, for if it develops in the same way as GLD and silver, this decline may only be an a-wave pullback as well.  Most importantly, as long as we remain below last week’s high, I am expecting lower to be seen, with the potential that we can drop to the 20-21 region in a c-wave of a larger wave 2 pullback. 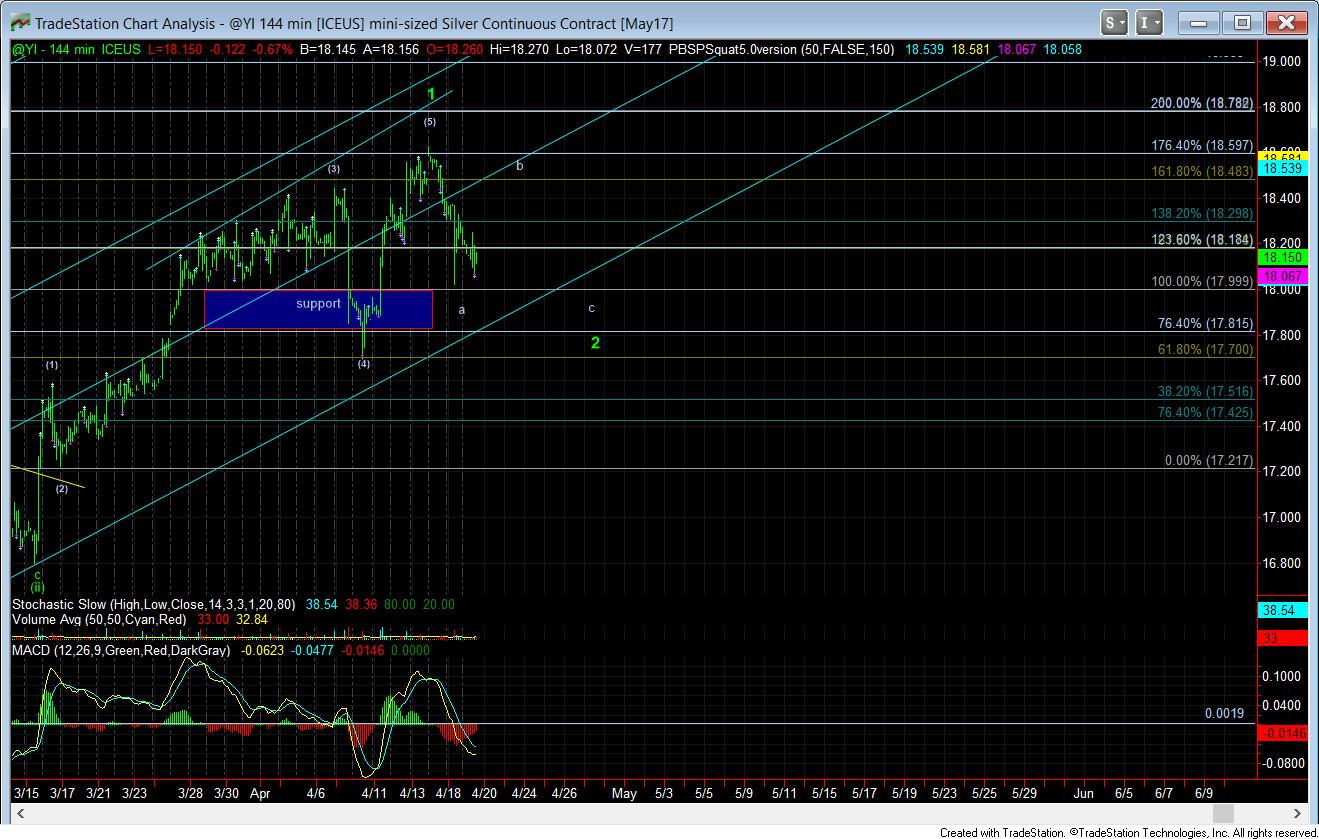