The last week of February was another case of déjà vu as the same thing played out again; grind higher highs, bull flag/consolidate and breakout again. The price action fulfilled the 2814 major S&P 500 target on Monday morning and then proceeded to backtest trending support in order to setup for the next move higher.

If you recall, the next few days were spent in the pre-determined high level consolidation/bull flag range. Without missing a beat, the bull train managed to close at the highs again for the weekly bar. It was the 8th week out of the past 10 uptrend weeks closing around the dead highs. As discussed, we rewired our brain and mindset so we were able to execute properly all week long just buying the dips vs. the key pre-determined levels and sticking with the game plan as demonstrated.

The main takeaway from this week is that nothing has changed as the bull train remains in full control in terms of momentum being sustained as the week’s trending support kept getting stick-saved with higher lows. The bull train is currently in another acceleration phase until the bears could at least showcase a breakdown below first support.

Friday closed at 2807 gaining 11.75 points vs. the Feb 22nd closing print. The past two weeks have been just slower grind ups as the bull train took its time to play against the 2814 major level derived from the December monthly highs.

As of writing, the Sunday night gap up above 2814 is very advantageous because the bull train is in another acceleration phase with the upside range being opened up. If you recall, it’s been two inside months trading within the massive Dec range of 2814-2316.75 offering no surprises.

It’s time to spice things up now because of the outside month range potential with 2824, 2865 and 2900 as the next major levels. This holds true when the bull train is in the immediate acceleration pattern upside with the immediate trending support at 2783 derived from Friday’s low. Zooming out, the weekly must hold supports are now 2775 and 2764 based on the past two week’s lows.

For the short-term bears, the absolute earliest indication of a trend reversal possibility would be a break of 2775 in order to have a chance to do a range expansion to the downside (levels such as 2764/2750/2730/2700/2680 come to mind) Until this occurs, it’s déjà vu all over again…grind higher highs, bull flag/consolidate, breakout again. Notice how some traders/analyst just keep moving the goalposts on resistances for the potential for the past 4-8 weeks. Textbook momentum ruleset indicate you’re better off waiting for the initial trend change and then short the retracement instead of keep blindly countertrending without utilizing the major levels.

Clear and concise context for March:

Treat as immediate bull train acceleration phase to the upside 2824/2865/2900+ until key trending supports break. However, if/when support do break, then be mentally prepared for a fast and sharp drop to backtest the elevated supports on daily/weekly/monthly charts given the past 10 weeks upside. (shallow 23-38% fib retracements come to mind)

Stay focused on key levels, level by level approach. Get in and get out on quick high probability setups. 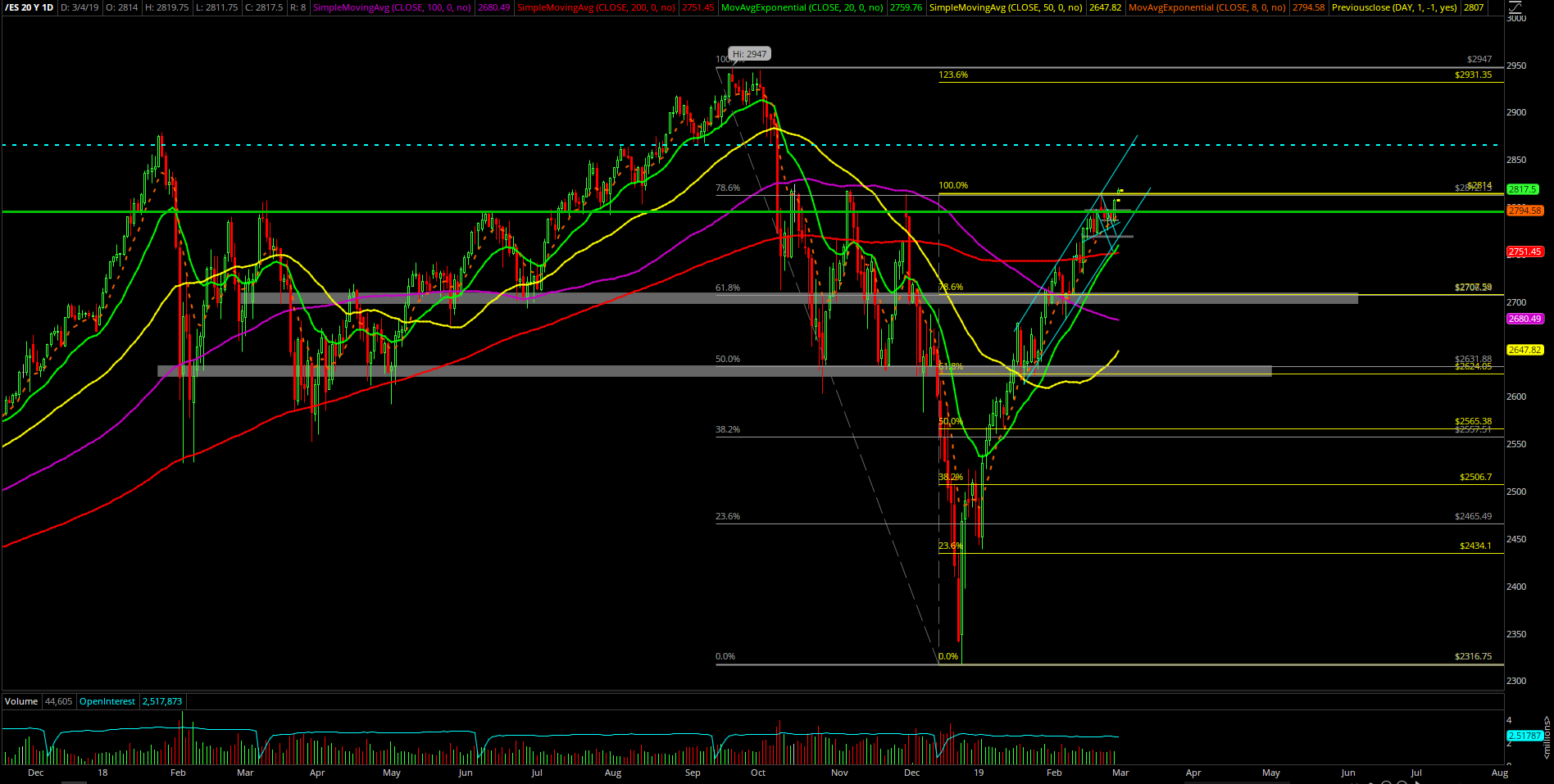 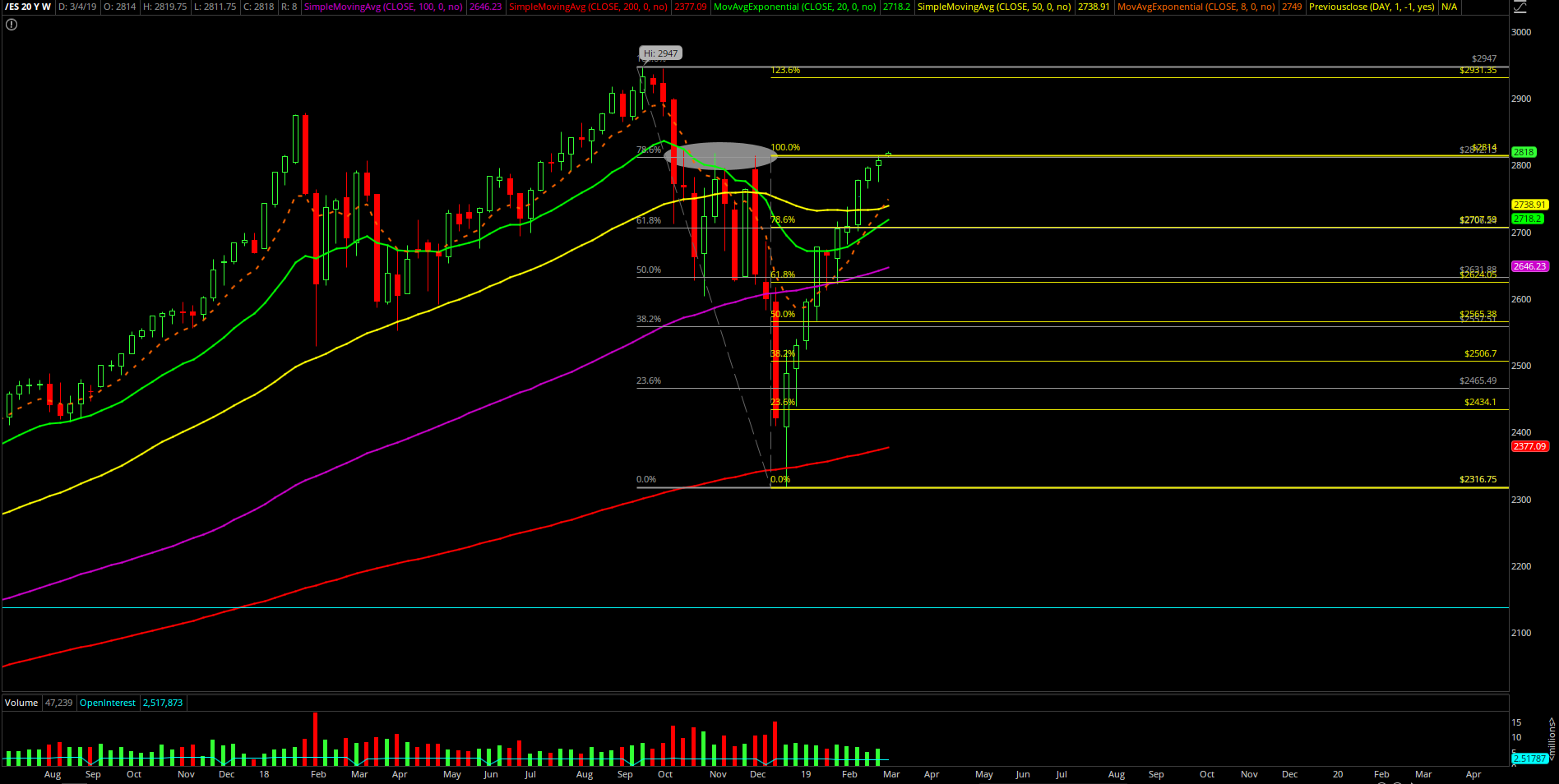 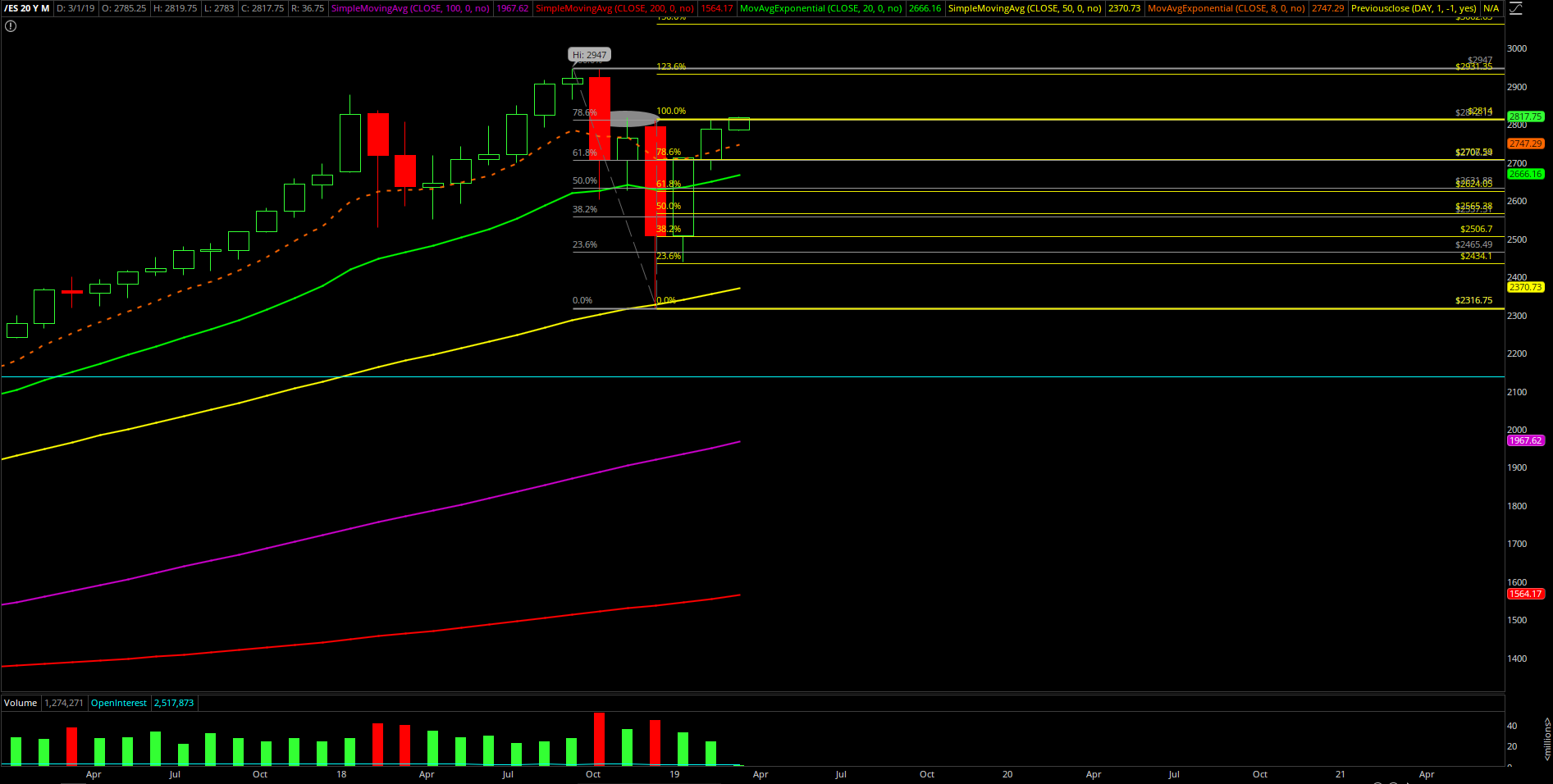 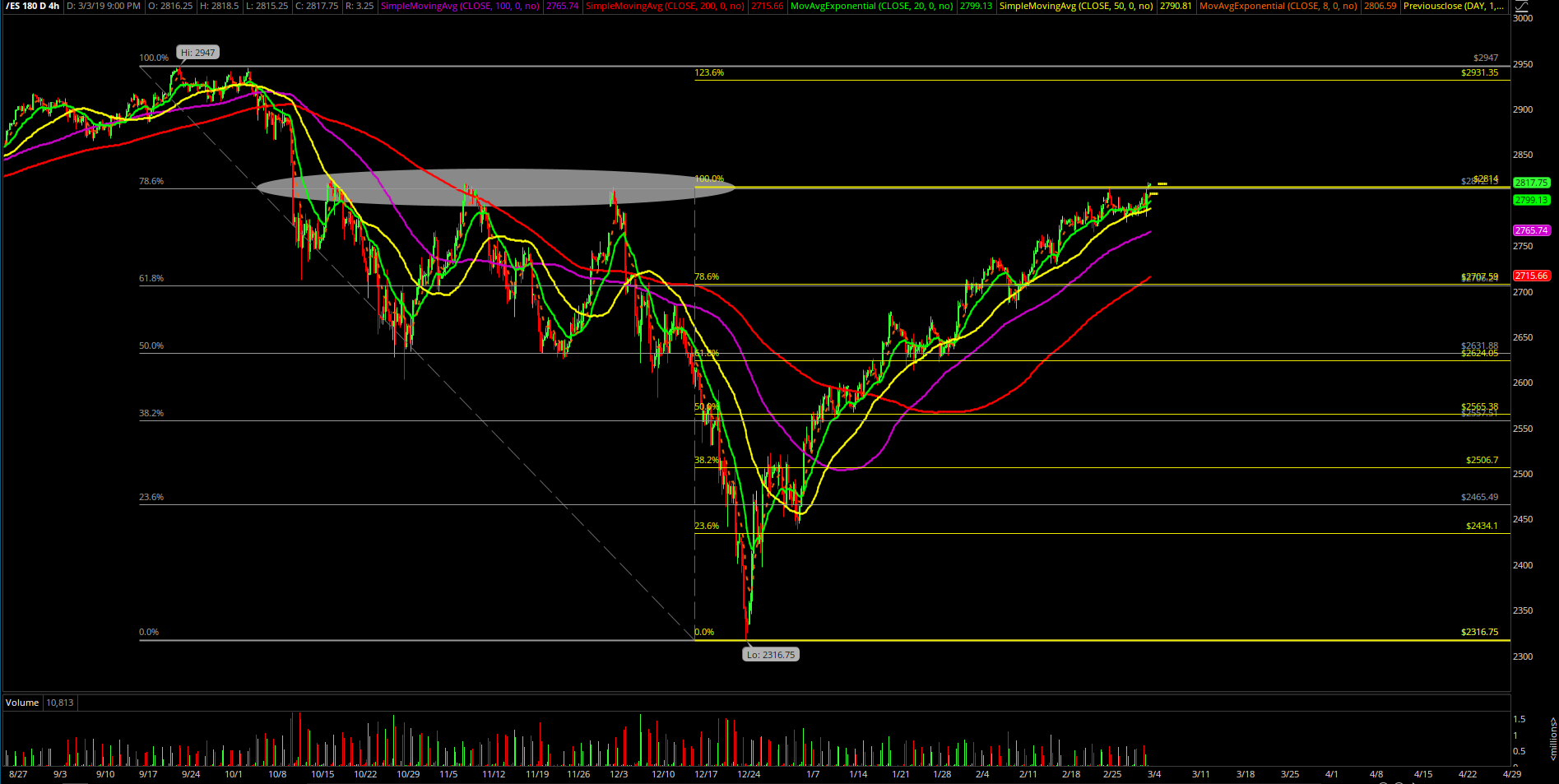 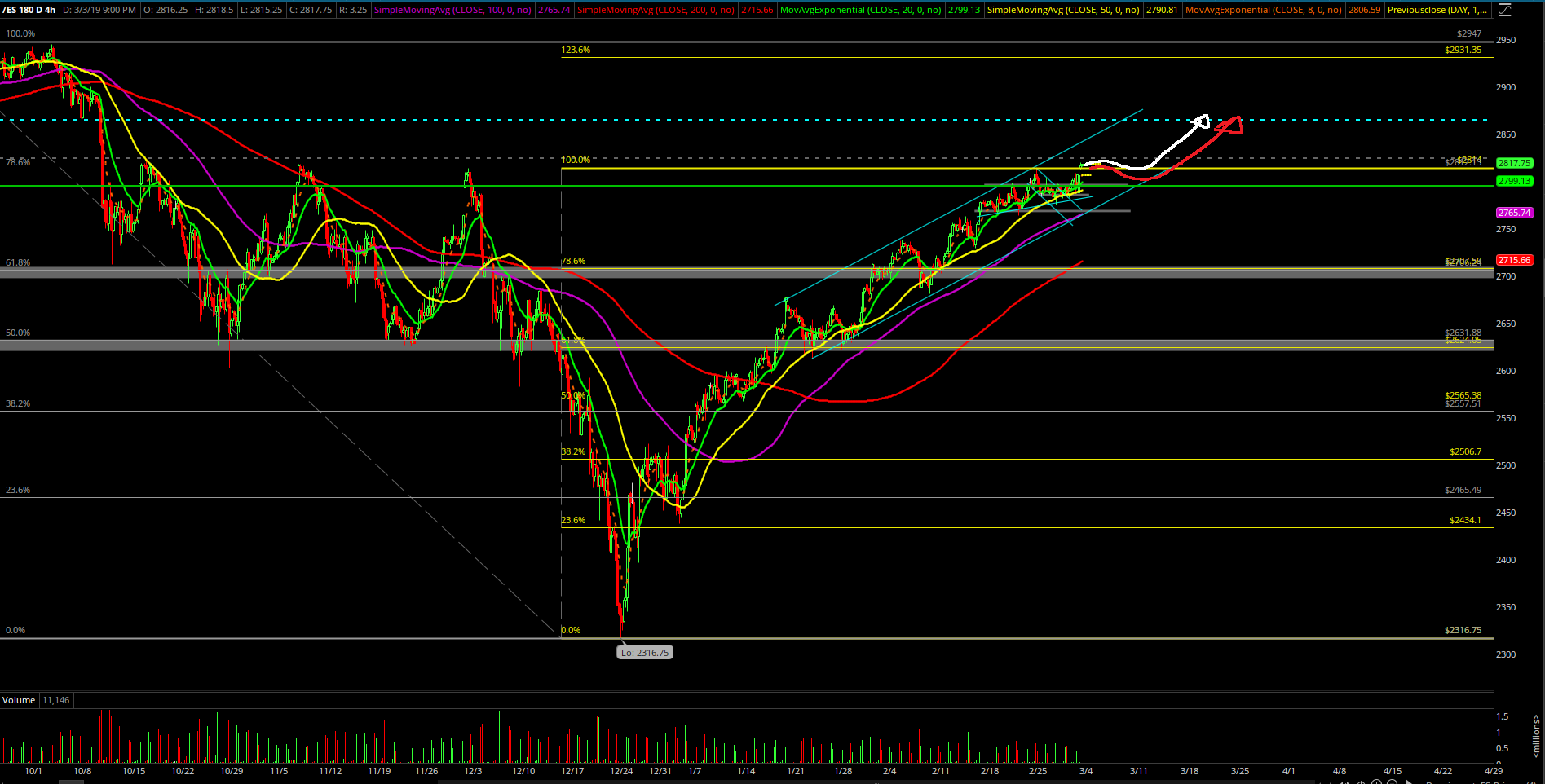 es march3review5
Ricky Wen is an analyst at ElliottWaveTrader.net, where he writes a nightly market column and hosts the ES Trade Alerts premium subscription service.