This is when things get interesting for me.  When social mood is telling a story and the markets and events in the world are playing out that story in whatever they do.  A few days ago, I posted on the patterns of "The China Story" reflected by the mood patterns from Hong Kong and Taiwan source data.  The implied story, to take place over the next 24 hours, could be a "game changer," either positive or negative, for what we are seeing in the news cycle regarding China and the protests there.  The chart below shows the pattern that points to "abrupt change" and at times to serious events which we would expect to see reflected in the news from China on Wednesday and/or Thursday.

Preliminary studies in developing a MarketMood Indicator for the Hang Seng and Taipex show that for both of these markets, the direction of the market on Thursday will be a continuation of however the market closes on Wednesday.  For the U.S., it's interesting that however the market closes today (11/29) is expected to continue directionally through Thursday, and potentially Friday.  This next market close could be a bellwether for a generally improving or deteriorating picture over the next few days.

U.S. Market close note: The U.S. market closed down  (Tuesday) but on its way up in the last hour which is considered an ambiguous close and does not give a clear indication of likely market movement rest of  week.  This will be updated tomorrow with Hang Seng close info.

Hang Seng close note: Hong Kong and Taiwan closed solidly higher (Wednesday) which means our preliminary models would have them higher for Thursday.  There appears to be a positive shift so far regarding the protests and Covid protocols.  The noted "potentially serious event" aspect of this pattern with the accompanying somber tone also can be seen in the death of former Chinese President Jiang Zemin.  When these serious or tragic events accompany this pattern, they most often involve a number of people, but at times have been associated with the passing of a specific well-known person.

What I'm also finding interesting, is that with different source data, all three pictures of social mood qualities  are reflecting a nearly identical pattern for the first two days of December (see charts below).  Since I have little experience with watching these divergences and convergences I will refrain from speculating on its meaning, but for now, I'm noting it and passing it on. 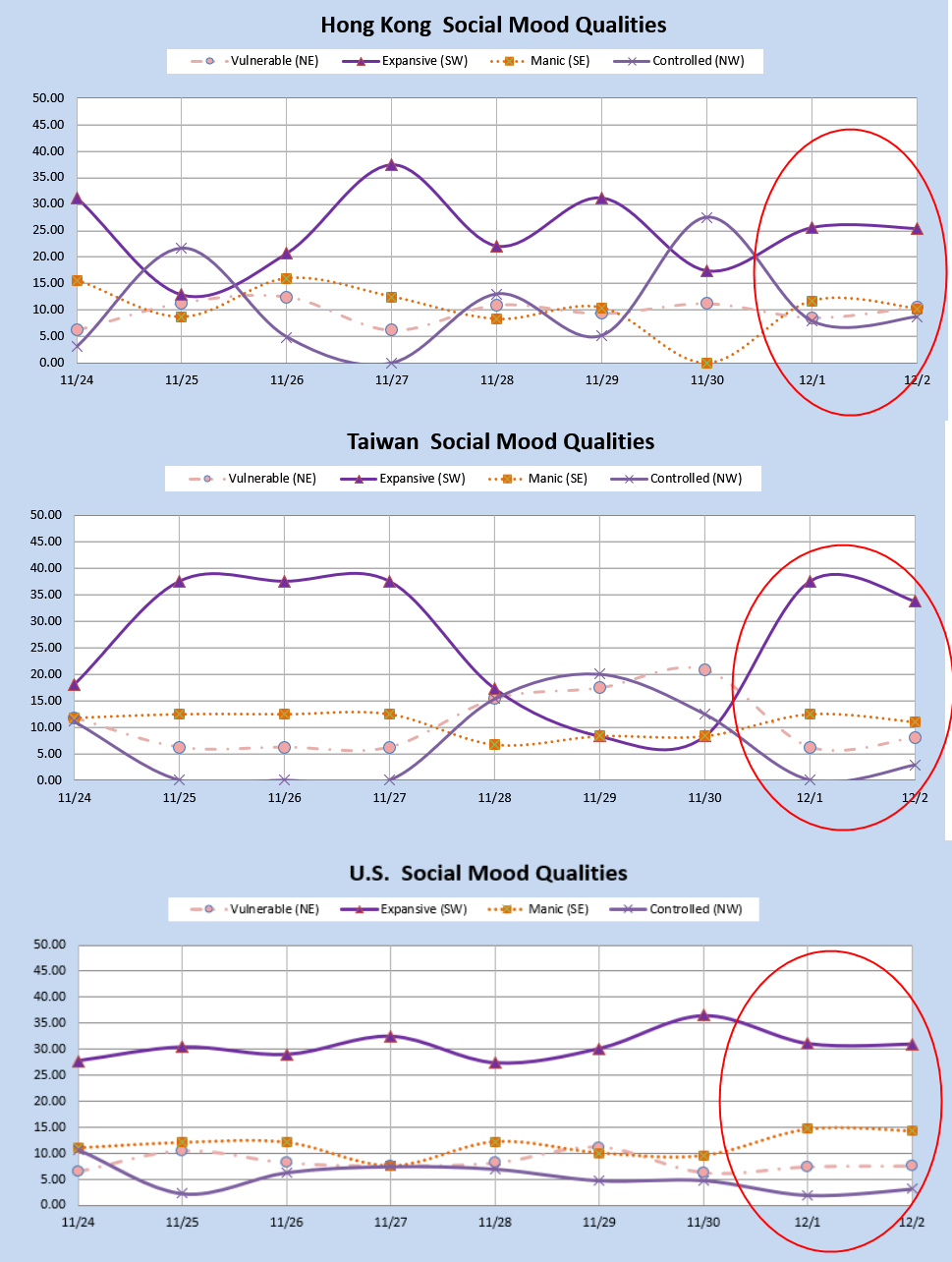