Dr. Cari Bourette is a contributing analyst at ElliottWaveTrader.net, with her work featured in our flagship service, "Avi's Market Alerts." Dr. Cari, as she is known in our Trading Room, has a unique method for measuring market sentiment, and obtaining actionable market data from that sentiment. She has developed a way to provide daily S&P 500, crude oil, gold, and USD forecasts based on her proprietary Market Mood Indicator. Dr. Cari has a PsyD in Clinical Psychology, MS in Geoscience, MS in Counseling, and BS in Physics. Her sentiment analysis is based on research going on since 2006 into converting social mood information into numerical data, and, in turn, converting Internet search trends to market forecasting. The results of her research and details on her methodology have been published in numerous publications, including Technical Analysis of Stocks & Commodities Magazine (Oct 2017).

About the MarketMood Indicator (MMI)

Developed by Dr. Cari Bourette, a contributing analyst at ElliottWaveTrader.net, the MarketMood Indicator (MMI) converts data on the focus of U.S. society -- often referred to as "socia l mood" -- into expected stock market movement. It is based on Socionomics, the theory that includes the idea that changes in social mood almost always precede changes in the markets. The MMI takes the themes of top internet search trends and scores them according to 4 primary mood qualities: Vulnerable, Expansive, Manic, and Controlled. These 4 scores are input into the MarketMood model, which converts them into expected stock market movement in S&P 500 points as well as Gold, Oil & USD points.

Research leading to the development of the MMI has been going on since 2006 by Dr. Bourette and a small team of researchers. In an article titled, "Daily Stock Market Movement from Oscillating Social Mood Factors," published Dec 27, 2011 by Berkley Press, in affiliation with Western Kentucky University, Dr. Bourette provides a detailed description of the 8 categories scored at data collection and the 4 primary mood qualities whose relative presence are the inputs to the MarketMood model. Other articles on the MarketMood Model have appeared in Technical Analysis of Stocks & Commodities Magazine (Oct 2017 and the Socionomist (Mar 2012).

The premises upon which the MMI is built are likely different from some that you currently hold about how the universe operates. Repeated exposure to the idea that themes in internet search trends about such things as Beyoncè and Game of Thrones that can be somehow quantified and converted to meaningful, seemingly unrelated data about what markets are likely to be doing 3 days later may cause some confusion and disorientation. At best, however, besides assisting in your trading strategy, it may expand the frontiers of Socionomics and the boundaries of what we currently know about the connection of what we think about today and what is happening in our lives tomorrow.

How MMI Works
This is a brief, but somewhat technical summary of the process of obtaining a stock market forecast for three days from now from hot internet search trends.

1). Get themes from Google Hot Trends (see example below of Hot Trends from February 15). In the example below, Alexander Hamilton themes are hiphop music, entertainment, historic, man, and leader. Vanity themes are woman, singer, minister, died, and nostalgia. 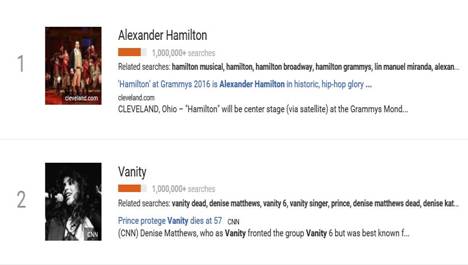 2). Code these themes into the 8 categories of MoodCompass nomenclature. Multiply by the number of searches (in this case 1 million each), and add them together. Simplify. The coding for Alexander Hamilton themes (after simplifying) was 2E 2W 2SW SE NW. The coding for Vanity themes was 4W NE 3NW. Adding these together: 2E 6W NE 2SW SE 4NW, simplified to 2E 6W SW 3NW.

3). Normalize—convert to relative percentages of NE, SW, SE, and NW (this is MoodCompass shorthand for the four primary mood qualities, Vulnerable, Expansive, Manic, and Controlled). In this example: NE 6.25%, SW 31.25%, SE 6.25%, and NW 56.25%. This becomes the input to the MarketMood model. This model analyzes the relative positions of each of these four basic mood qualities, as well as changes since the previous day. The daily changes in these four basic mood qualities for April 2016 are shown below:

4). MarketMood model output: The MMI outputs an expected market change in S&P points. The chart below shows a daily cumulative "Mood Signal" vs. S&P Close. While the correlation is significant at the .0001 level, the daily direction is much more useful for trading than the amount of forecasted change for each individual day, as the movement in a single day can vary substantially from the model output for that day.