As the debt ceiling is approached, the Treasury can no longer borrow and has to honor all the obligations that Congress has already approved. The problem is that the U.S. government has been operating at a deficit every year since 2001. Since 1981, there have only been four years where the government had a surplus - 1998-2001.

Often, the debt limit is increased without any real debate especially when the President and Congress are controlled by the same party. Yet when they are opposing parties, it is an opportunity for politicians to grandstand. We're not going to raise the debt limit unless A, B & C, says the House. The President will argue, "I won't sign the spending bill with those conditions". Both sides will accuse the other of holding the Treasury "hostage" and will seek to terrify the American people by talking about the horrors that will happen if the U.S. Government defaults on its debt.

Don't get me wrong: a default on U.S. Treasury interest payments would be catastrophic to everyone living in the U.S. and really for the entire world. It would create financial armageddon at a level never seen in modern times. Your bank, your brokerage account - they don't have your cash. They get the liquidity to provide you with cash when you demand it by initiating a transfer, writing a check, using your debit card, etc., through U.S. Treasuries. If those Treasuries are in default and are therefore worth $0.50 on the $1 or less, your bank is insolvent. It doesn't matter that they "owe" you your money; they don't have it to give you, and the government agency that guarantees your money if your bank is insolvent? They don't have money either.

Of course, the government would likely default on several other obligations before defaulting on interest payments. Government workers would stop getting paychecks (including the politicians), government bills would be delayed, and government contractors wouldn't get paid in a timely manner. All of which would create significant angst and political unrest. It isn't that the government would have no money - tax payments would keep coming in, and the Treasury just wouldn't be allowed to borrow.

Ultimately, it is just political grandstanding. An agreement will be reached. There will be plenty of hype in the news media. Will it impact the markets? Well, in 2013, the standoff lasted all the way to October 16th, Treasury Secretary Jack Lew stated that the limit had to be raised by October 17th to avoid defaults on obligations, that is as last minute as you can get. What happened to the stock markets in 2013? 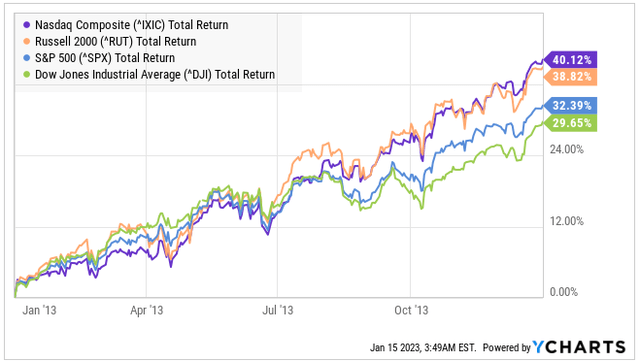 It is hard to say if any of those dips were caused by the hype in the news media or if they were just natural pullbacks in a bullish market. Yet each dip was only a few percent off the peak. The Treasury began using the "extraordinary measures" that Janet Yellen recently discussed on May 19th. Certainly, selling your stocks in reaction to that news in 2013 was a mistake.

So don't get wrapped up in the politics of the situation. If you want to argue with your friends about what should be cut and whether or not there should be a debt ceiling, or who is at fault for decades of deficit spending, have fun. Regarding your investment portfolio, this is not a material issue. The market assumes that a default will not happen, perhaps precisely because if a default does happen, then whether you have $10 million or $100 in your brokerage account becomes irrelevant.

Now let's talk about the issues that will move the market.