Back in 2008, during our financial crisis in the United States, the powers that be decided to begin a process called Quantitative Easing to provide liquidity to our financial system.

For those that do not understand the Quantitative Easing process, and how it works, feel free to read this article.

Basically, when the QE process began, the market was hailing the death to the US Dollar.  Everyone was quite certain that the QE process was going to cause the dollar to crash.  So, for years, all we heard was that the dollar was going to imminently crash because of QE.  There are analysts that even began their own websites using that very theme.

However, those that have followed me since I began publicly writing know that I was calling for a multi-year bull market in the US Dollar in July of 2011, and in the face of the QE process.  Yes, you heard me right.  I was not looking for a market crash like everyone else.  Rather, I saw the set up for the exact opposite of what the market was preparing for – a major multi-year dollar rally.  And, I viewed QE as having no effect upon the market or my market expectations.

Now, at the time, the market was quite certain that QE was still going to cause the dollar to crash and thought I was simply wrong.  Clearly, we all now know what happened since, and it shocked most in the market.  Yet, I have seen no one of the “crash-camp” attempt to explain why they were so utterly wrong.  So, I will tell you why.  They applied a market fallacy to predict how the dollar would react. And, when you build your house (or analysis) upon a shoddy foundation, it will always come crashing down.

So, fast forward a number of years, and we have hopefully all recognized the fallacy of using the QE process to prognosticate things like a dollar collapse or a metals rally to the moon.  I believe most have finally recognized the folly in making such assumptions.  Any reasonable person would simply recognize that QE had no effect upon the dollar or gold, and clearly not the effect that everyone assumed at the outset.

Well, I thought that until today.  What if I told you that QE caused the metals to crash and caused the dollar to soar?  I mean, after QE was instituted, the dollar did soar and the metals did crash.  Right?  So, does it not make sense to make such an assumption based upon this “correlation?”

I would certainly hope that is not what you would conclude.  You see, any thinking adult understands that correlations do not equate to causation.  Just because two events occur at the same time does not mean that one was the cause of the other.  Yet, today, someone sent me the following chart which actually attempts to present this fallacy as the basis of their “analysis.”

If you take a minute to digest what the chart is really saying, it should make you scratch you head.  In fact, it should make you shake your head.  Yes, this “analysis” is actually relying on the premise that QE “caused” the dollar to rally.  Therefore, the underlying basis for this “analysis” is a fallacy.  It is based upon a completely fallacious correlation.  And, the “analyst” takes it further by claiming that the European Union QE will “cause” the Euro to rally as well, which is based upon his underlying fallacious QE correlation.

Ultimately, this “analyst” is presenting his prognostication premised upon a proven market fallacy, and attempting to use that fallacy as a correlation to the Euro.

When I was in 3rd grade, my teacher had a sign at the head of the class which read:

I long for the day that investors begin to think in an intellectually honest manner so that they recognize that just because something is printed on the internet does not mean it is even worth taking the time to read. 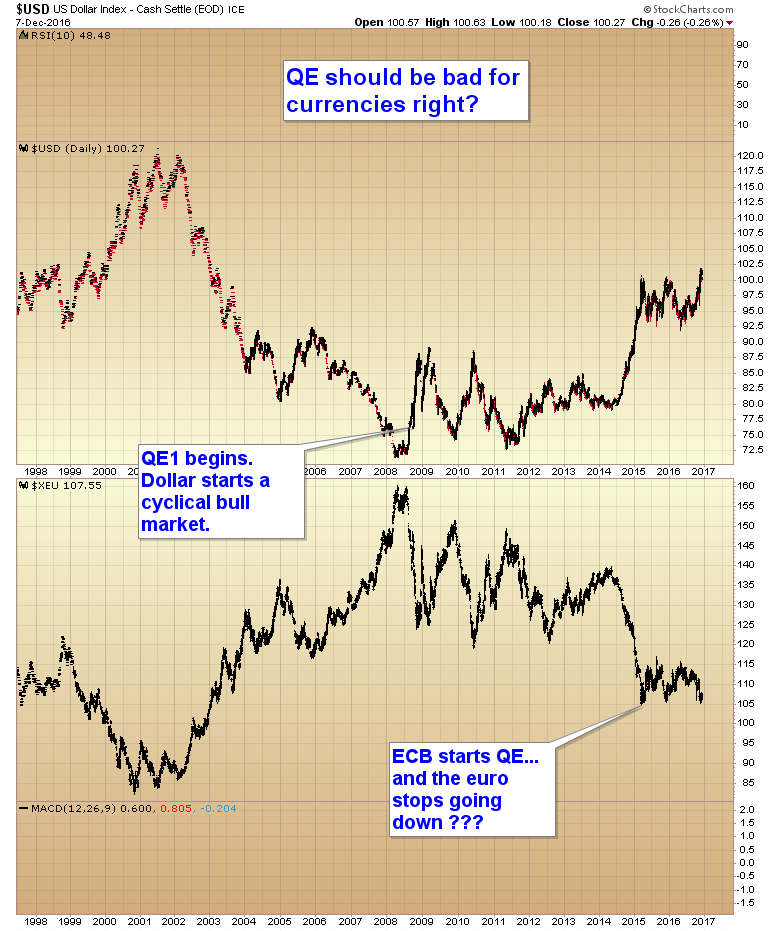