Monday’s session was a textbook bear trend day as the short-term continues to be dominated by the bears. It started with Sunday night trading holding onto the 1-hour 20 exponential moving average (EMA) trending setup with the overnight high being 2616.75 on the Emini S&P 500 (ES) and doing a gap-down-and-go setup.

If you recall, the market opened at around 2590 as a gap down and quickly flushed into 2571 low that found a bid and managed to do the expected dead-cat bounce given the oversold conditions. The morning dead-cat bounce made its way to the 2600-2605 gap fill resistance zone and then the 1hr 20EMA hard rejection took place. Eventually, the market broke below the key 2580 again and opened up the 2552/2529 levels immediately for the follow through. Both key levels were pretty much fulfilled by the end of the day as the bear train acceleration continued from the lower highs and lower lows.

The main takeaway from this session is that the October monthly range low has been decisively broken and now testing against a major. This major is obviously the Feb/current year’s low at 2529 so it’s key time for price action to dictate the year end closing print.

Daily closed at 2556.75 with high at 2616.75 and low at 2533.5. The immediate trending resistances had moved down to the 2580-2585 zone so bear train remains favorable when below. The major support level ahead is the obvious one being 2529 being the Feb/current year’s low. The market produced a quick bounce against it at the end of the day back into 2570. If that fails to produce any sticksave overnight/tomorrow, then on-trend opens up to 2500/2480 next key levels.

Alternatively, above 2580-2585 then market is susceptible to backtesting 2600-2605 zone from this morning. The earliest indication of a temporary bottom/sticksave pattern being in place would be above 2600 intraday along with a daily closing print above 2616.75 confirming this.

Note: we are being fully aware that tomorrow could be an inside day rangebound shakefest between 2580-85 and 2529-2533 if not much occurs by noon given today’s trend day pattern to take a breather. Also, there’s FOMC timing catalyst on Wednesday so traders should be extra nimble going forward. 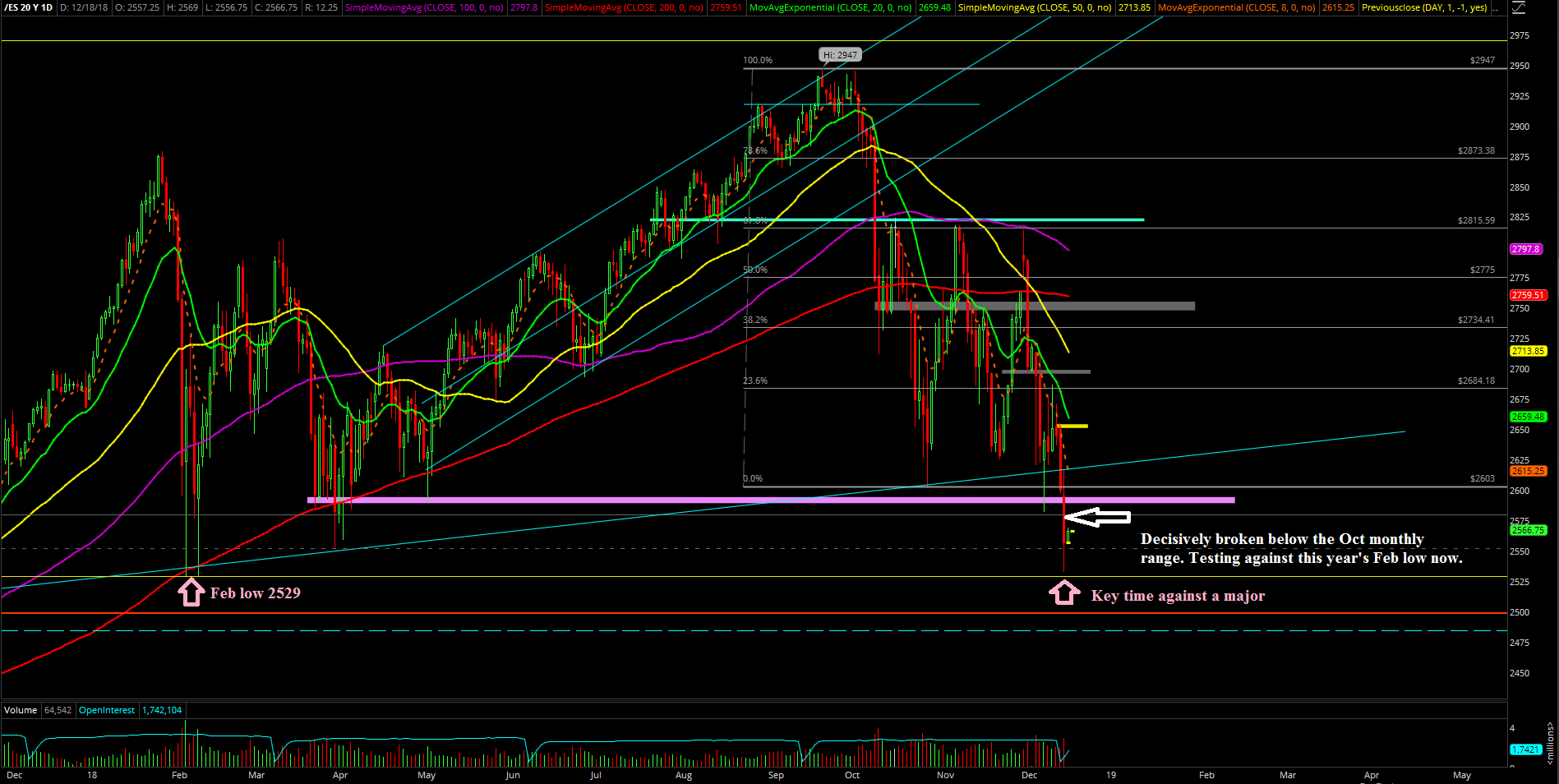 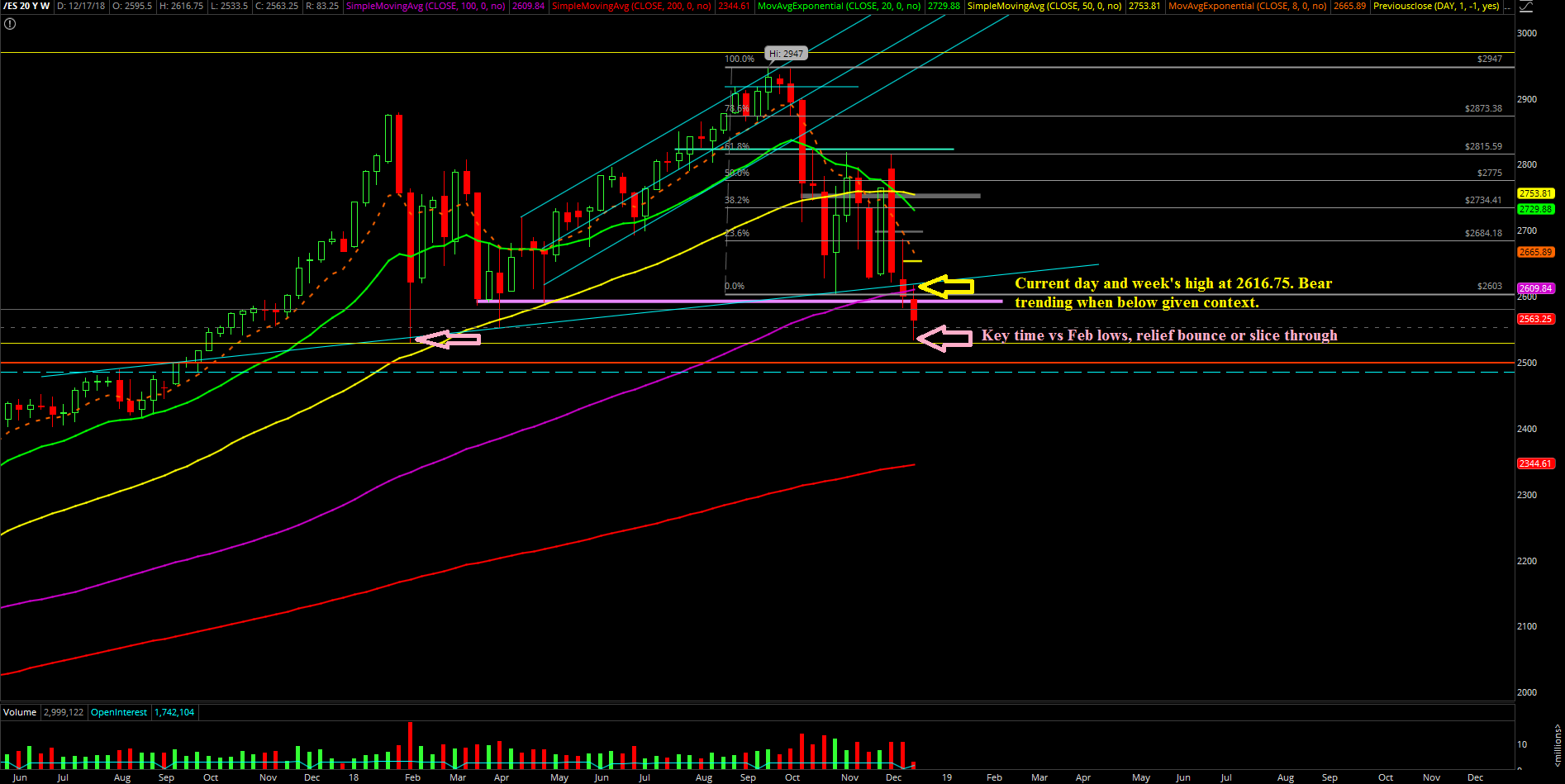 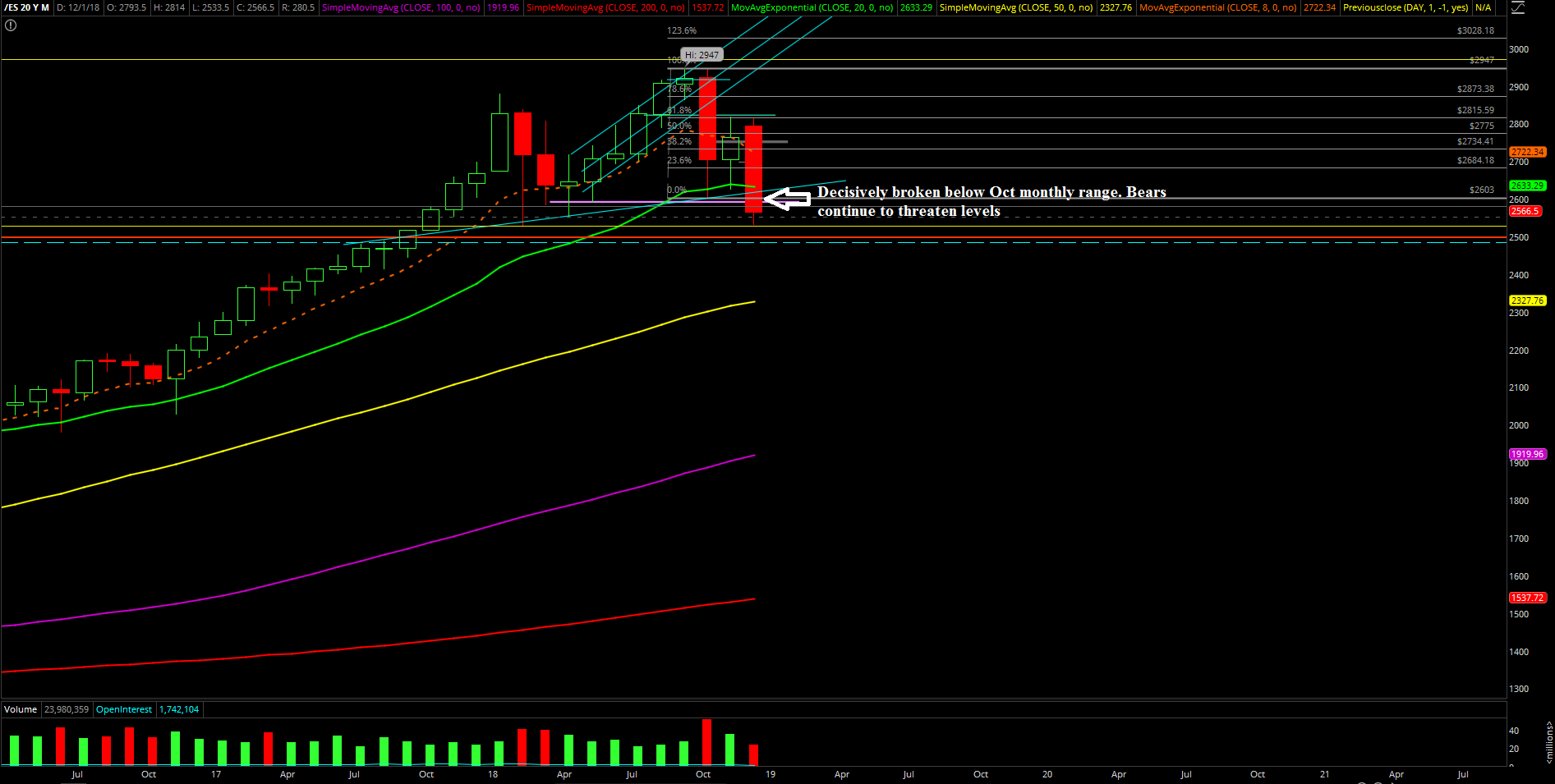 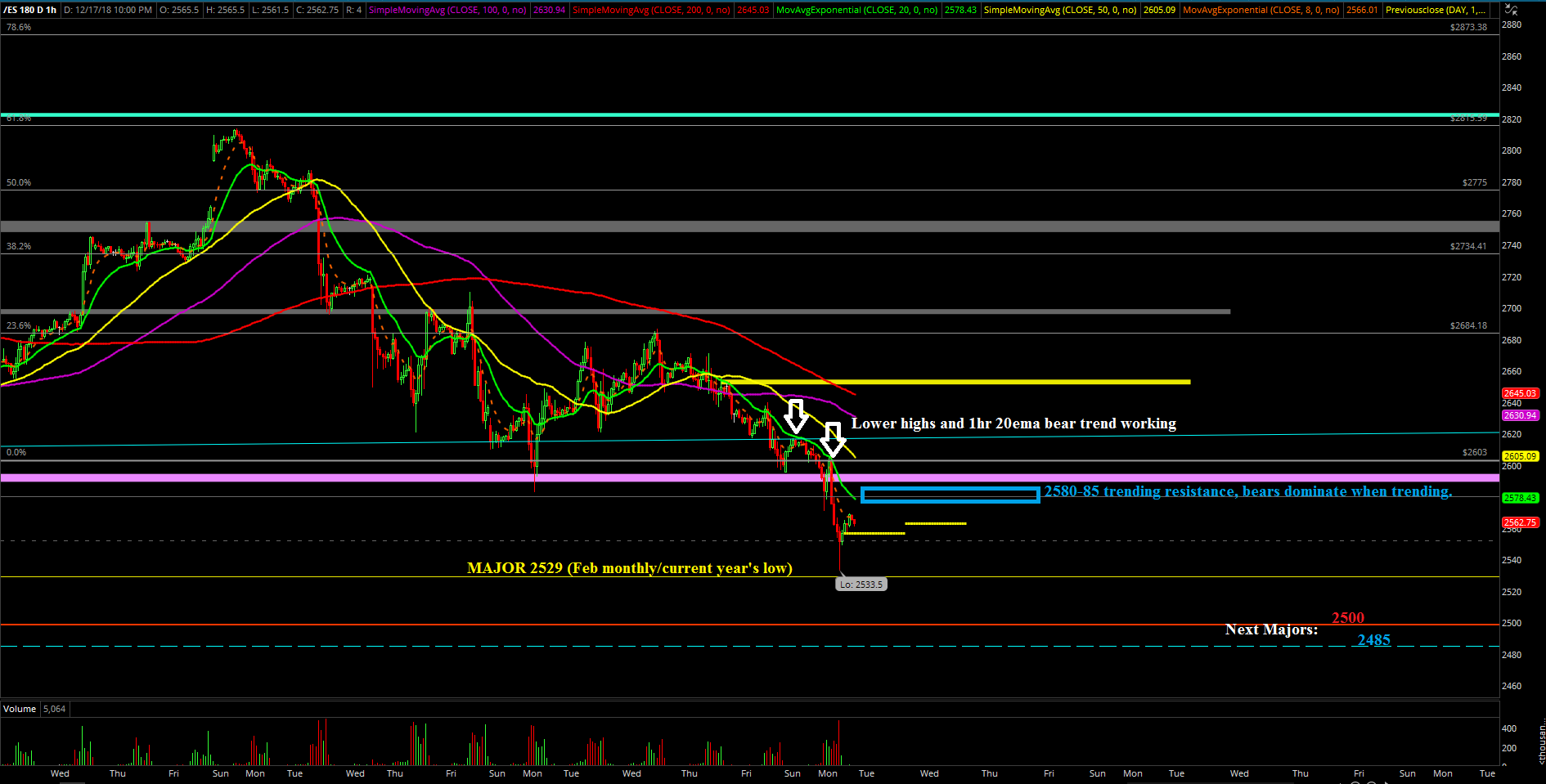 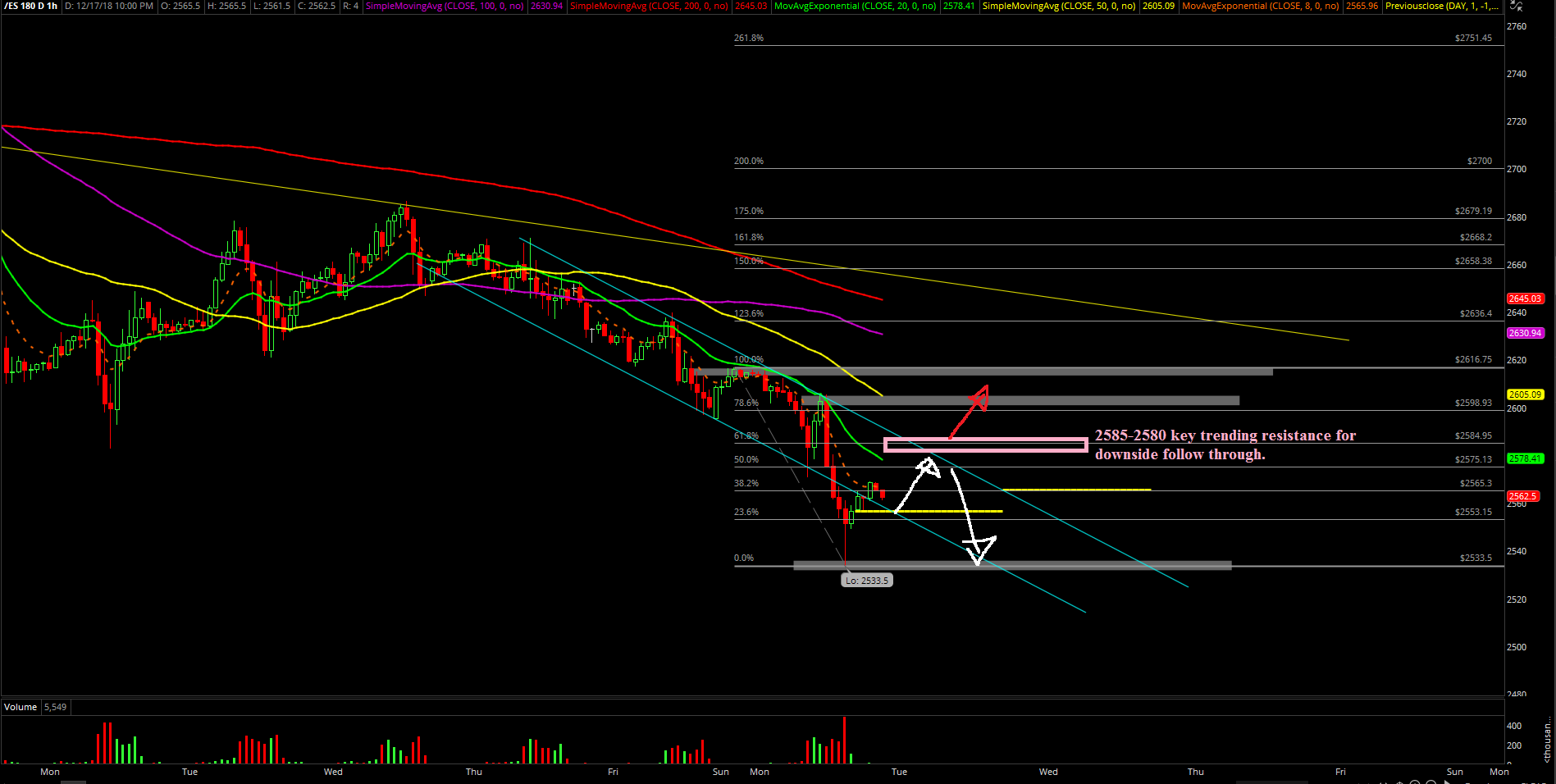 es dec17review5
Ricky Wen is an analyst at ElliottWaveTrader.net, where he writes a nightly market column and hosts the ES Trade Alerts premium subscription service.