Friday’s session played out as an expected continuation day given the week’s large downside trend from the Monday-Thursday momentum. In simplest terms, the bears were able to maintain overnight lower highs and lower lows into the Friday RTH (regular trading hours) open and then the bear train accelerated towards the 2620 major level on the S&P 500 immediately after the gates opened.

Our prior report on Thursday night anticipated the move, noting: "It’s been a large trend week to the downside thus far and Fridays typically act as a continuation during these strong directional days. Bears will try their best in their power in order to wrap up the weekly candle around the lows or at the lows by the end of Friday’s session. Then, we think 2620 would be a great stick-save opportunity on a first try basis for the opposing BTFD for a quick trade potential."

The opposing bulls/BTFD crowd actually managed to do their part with the intraday low at 2627.25 intraday that bounced as high as 2692.75 in a swift manner. If you recall, this is just 1 tick below the key level at 2693, the same level that’s been important all week long. After fluctuating between two of the key levels 2693-2620 in a relatively large range, the market experienced a typical Friday afternoon movement where it’s just stuck, but in a larger range this time than the regular good old times.

Overall, the bears were unable to wrap up the week/weekly candle at the dead lows, but they did an awesome job given the market went down 105 points versus the prior week. The upcoming week is going to be about the month end closing with 3 sessions left. Then, likely building a strong temporary bottom soon as the pattern indicates with either that Friday low at 2627 or closer to next major support at 2590 being the foundation.

Friday closed at 2662.25 and the market completed a straight downtrend continuation after last week’s doji pattern that ultimately lost about 105 points versus the prior week’s close at around 2767. Technically speaking, it's still a bear dominated market in the short-term when price action is immediately below the key trending levels of 2693/2700. This means that aggressive traders are still employing the STFR strategy as it remains favorable for now. (STFR = sell the f’ rip/rally.)

Heading into this end of October/start of Nov week, the major levels remain the same from last weekend’s report with 2620 and 2590 as major supports given this year’s prior bottoms along with 2600 being a major psychology number as well. The levels at 2675 and 2693 have obviously become resistance now. At this point, short-term traders should utilize STFR when below 2693 to take advantage of the immediate bearish momentum before it finds a significant temporary bottom formation. Conversely, if  bulls reconquer 2693 and then 2700 immediately, the odds of a significant temporary bottom increases dramatically and traders need to be aware of the backtest against the major levels that had become resistances now.

If we zoom out a bit, we must be cautious here and on the lookout as the bigger pattern/setup is indicating to us that the action is getting rather close to some sort of a stronger temporary bottom. The major 2620 on Friday managed to do an intraday stick-save at 2627.25 and the market is within the 61-78% fib retracement of this year’s overall range between 2947-2529 (the Oct ATH and Feb lows). Obviously, there’s no confirmation yet, but we’re watching this closely as a lot of supports coincide around this region of 2620-2590.

Thinking out loud, if things stabilize for the scenario, then the dead-cat bounce/sustained bounce would be quite large even with a 50% retracement of say 2947-2620, which is around 164 points already back to the 2780s. We’ll take this day by day, but something to ponder if the macro picture is playing out the ranges. 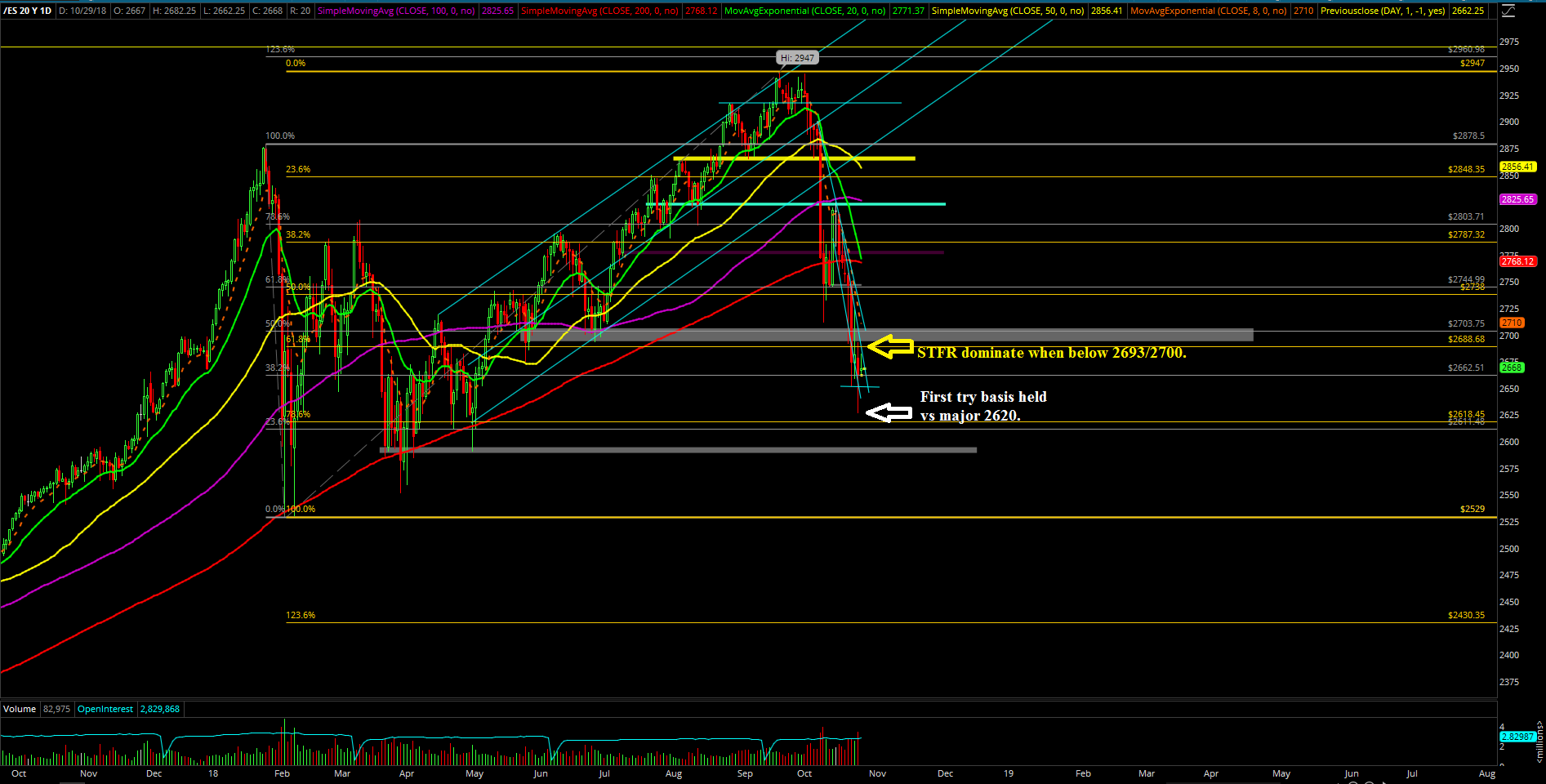 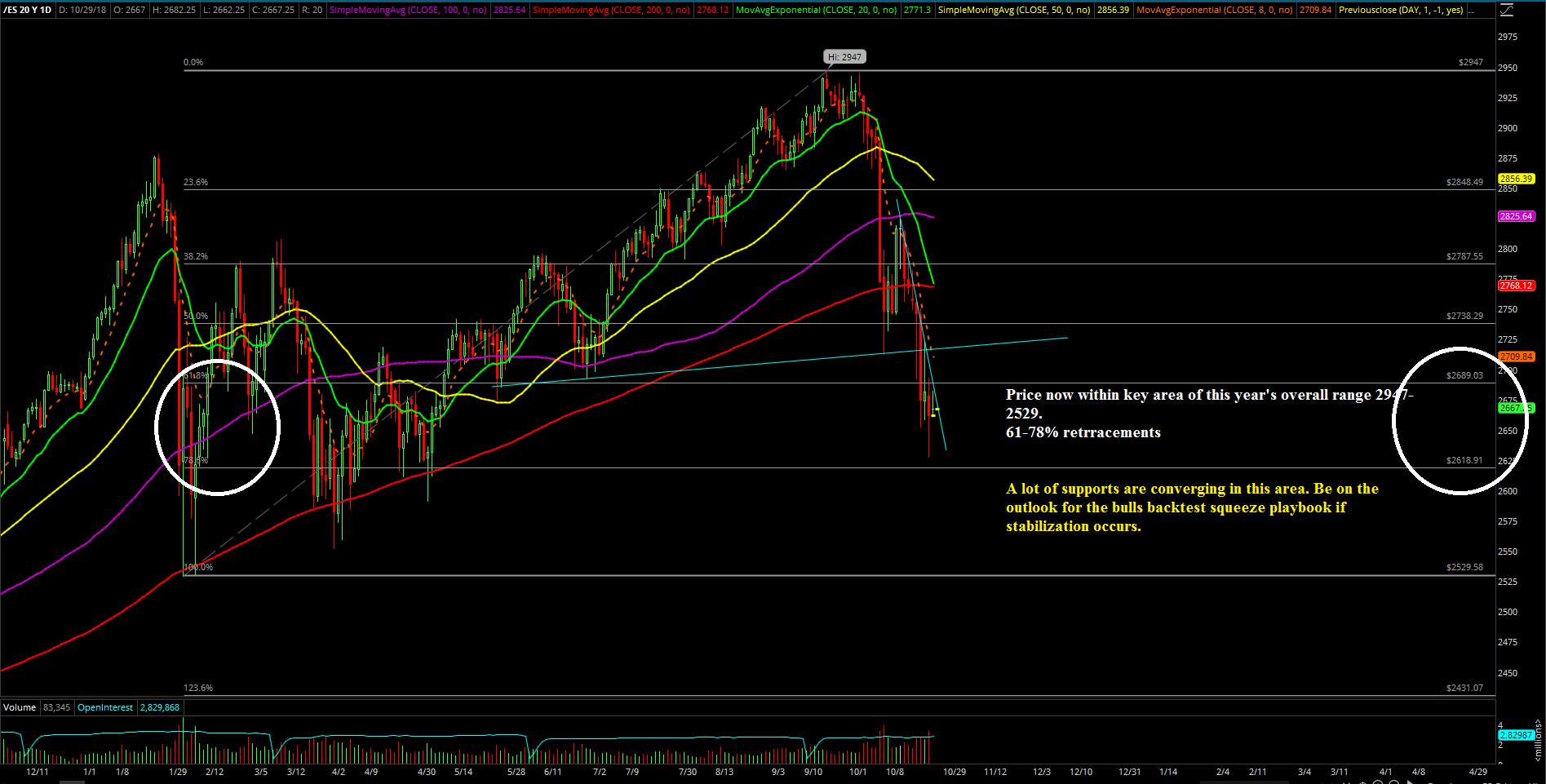 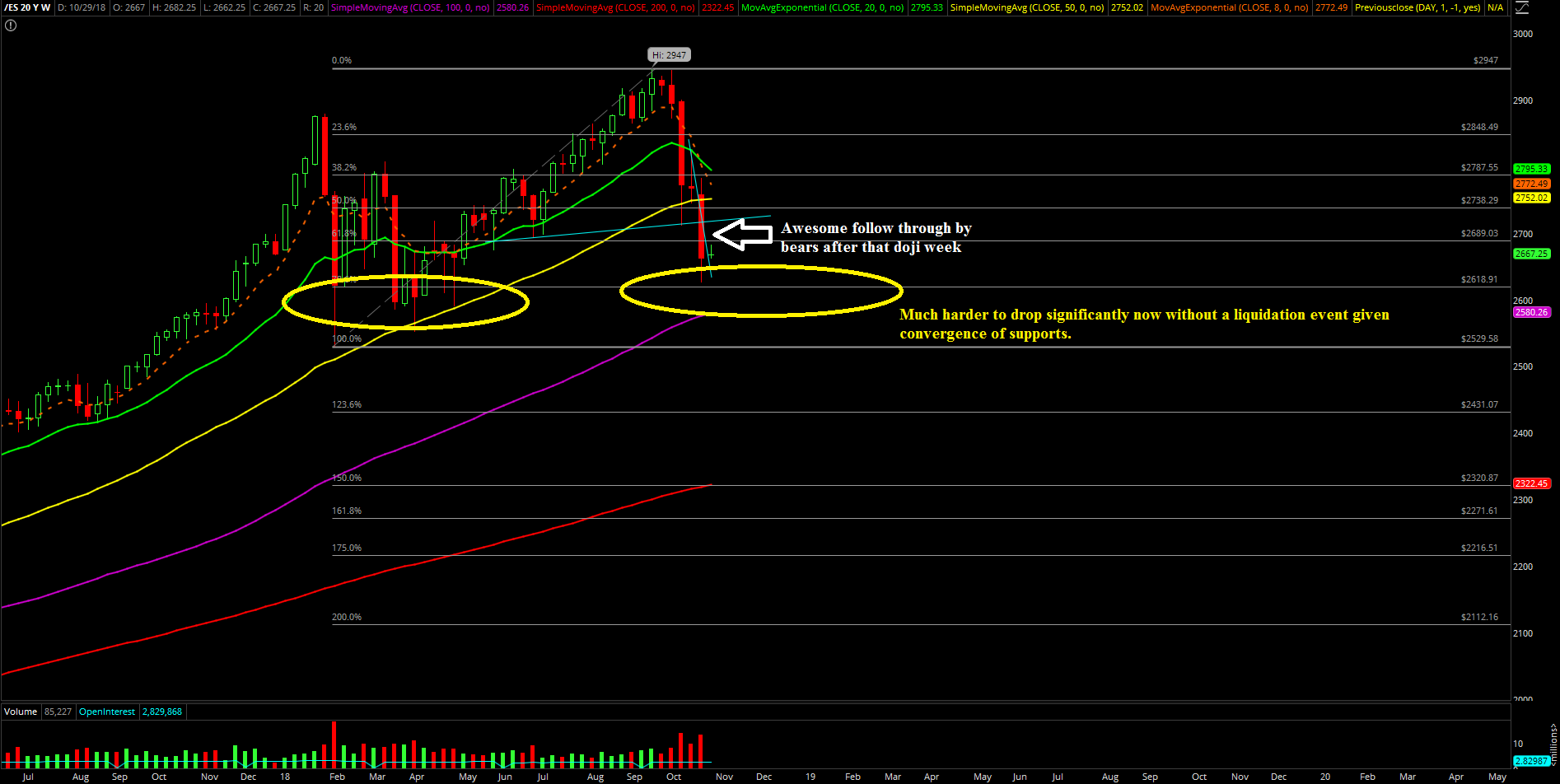 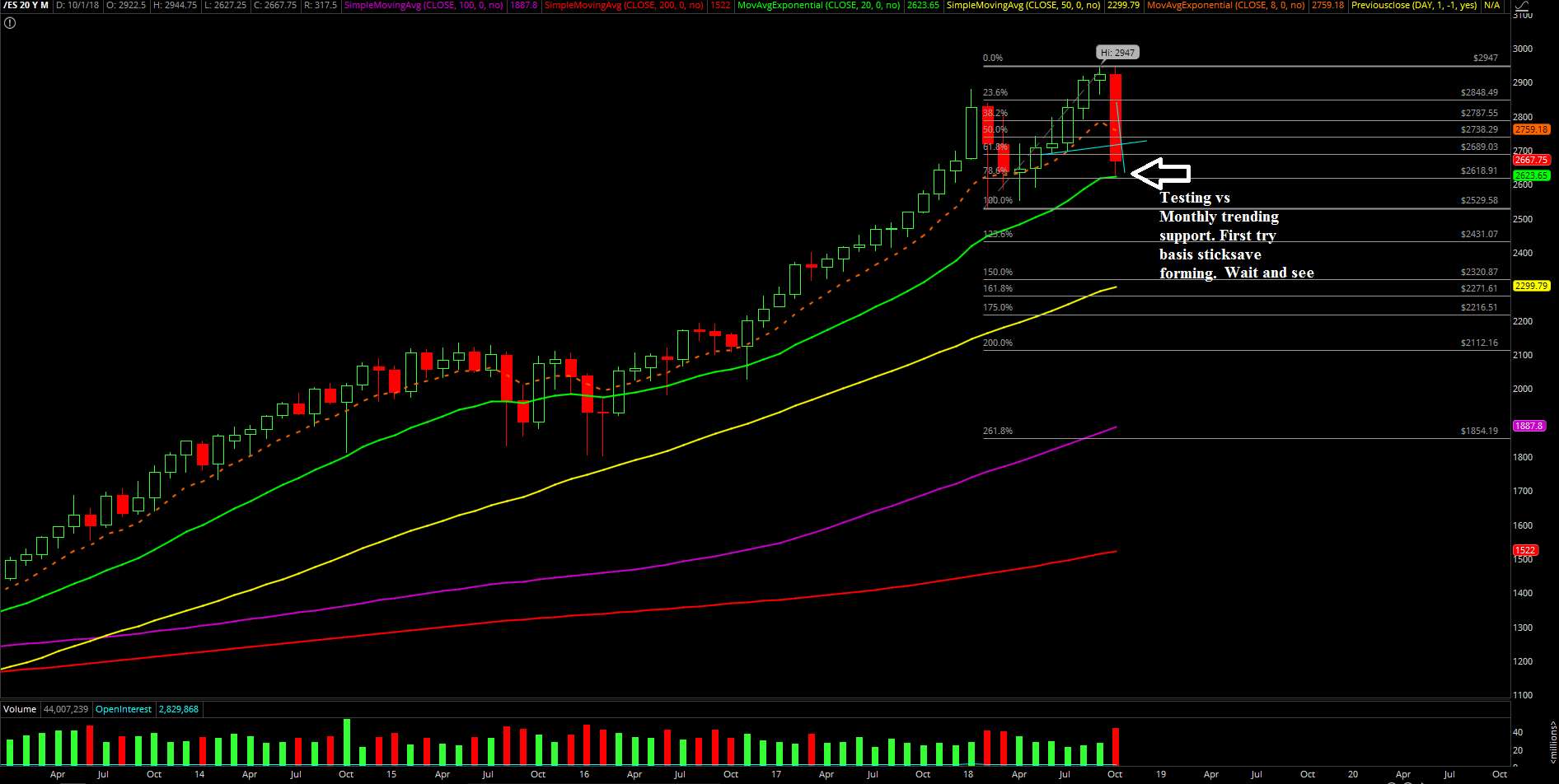 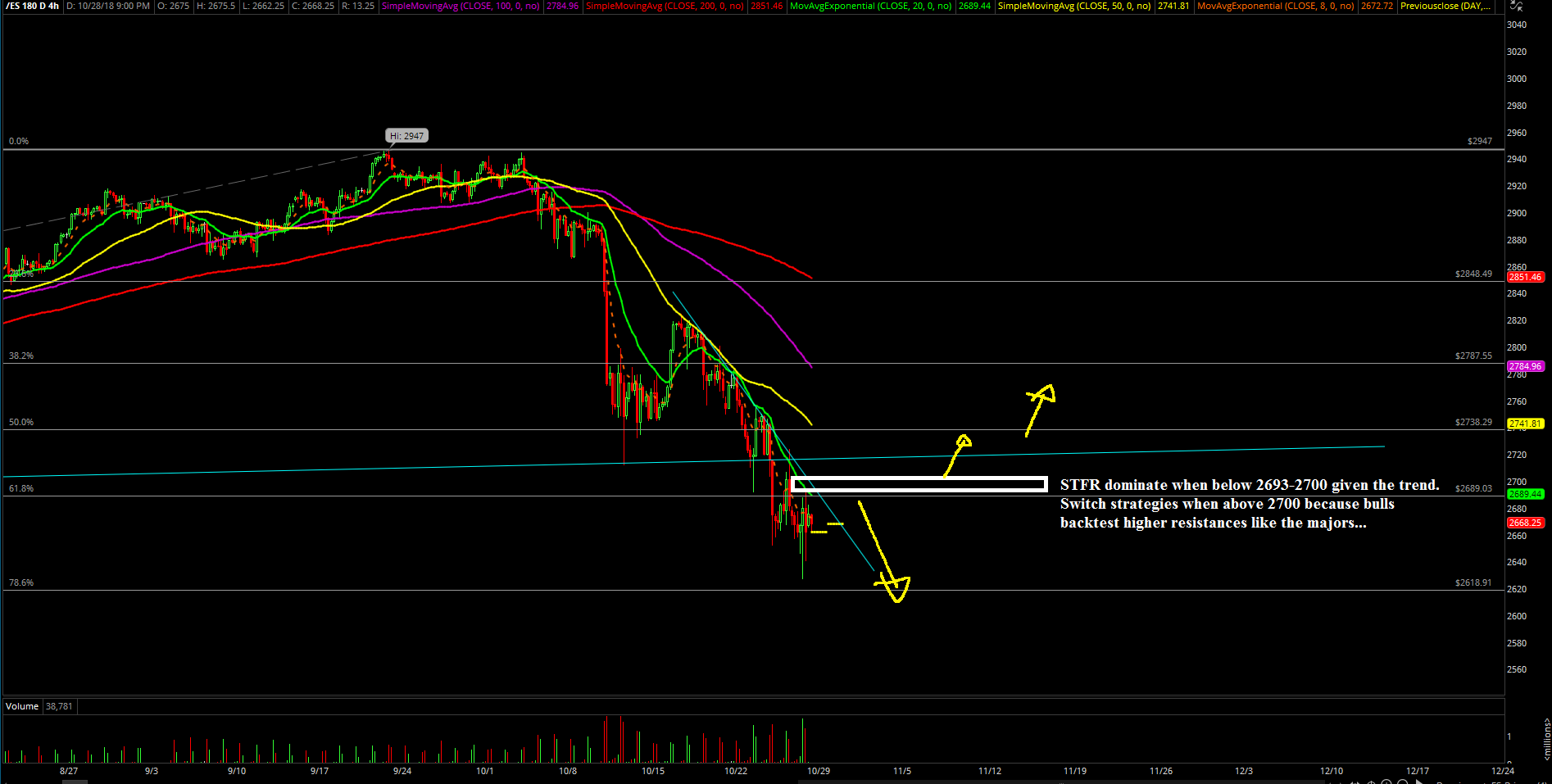 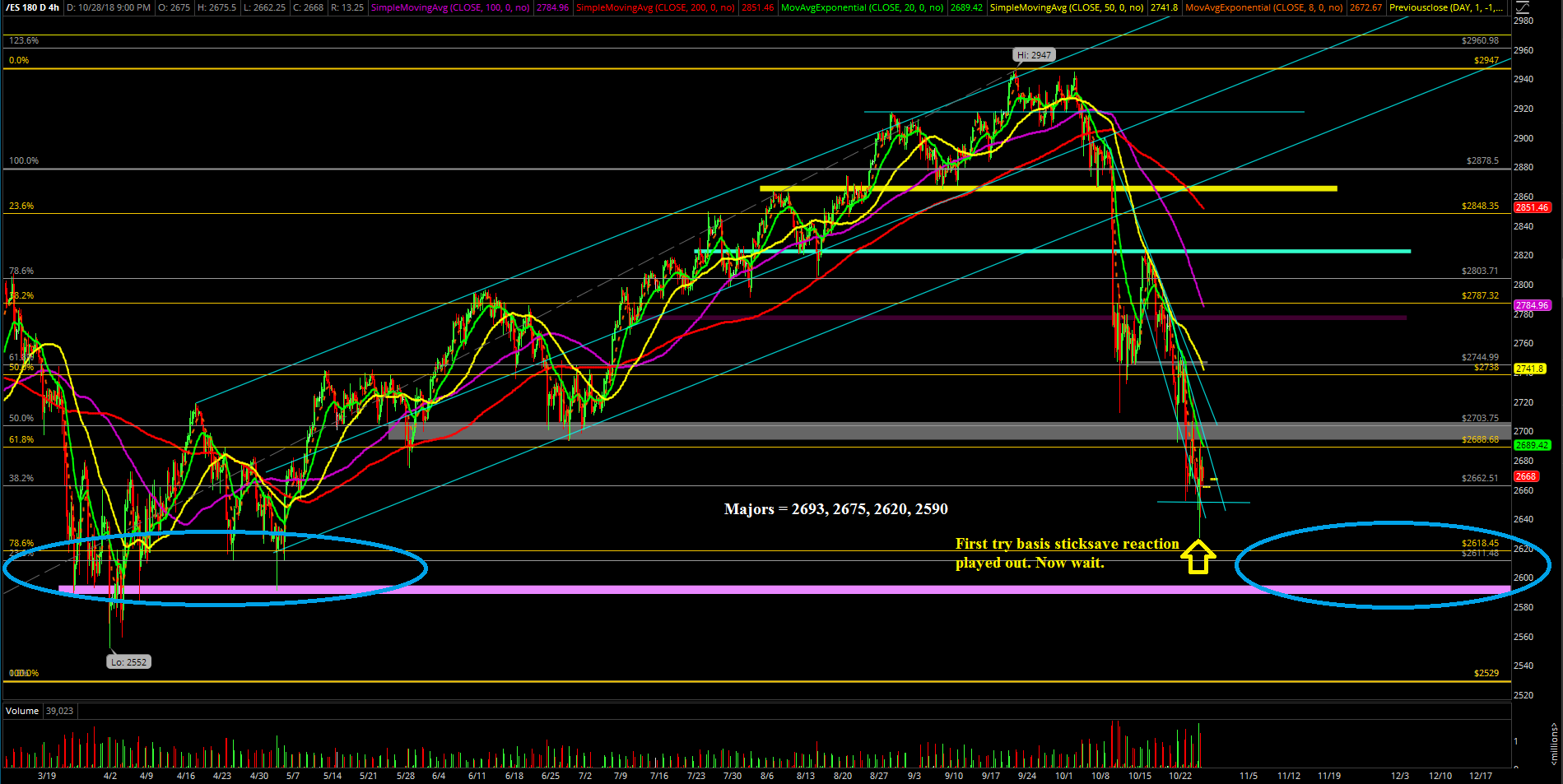 es oct28review6
Ricky Wen is an analyst at ElliottWaveTrader.net, where he writes a nightly market column and hosts the ES Trade Alerts premium subscription service.