Tuesday’s session was fairly surprising as the likely inside/range day did not pan out accordingly. It’s the first real surprise in weeks as it’s been that easy lately. This means that short-term bears are actually alive again as they are resurrecting the pack for the attack. If you recall, the bulls could not defend the 2894 and 2883 key levels this morning for the range low so the bears had an opportunity to force the price expansion to the downside levels. They did just that with the STFR grind down train and eventually the intraday price action bottomed out at 2862.5 vs. the daily 50SMA that is also the daily BB mean reversion low area. If we zoom back a few days, it’s been almost 100 points from top end to the low end 2961-2862 since price closed above daily BB and now did a mean reversion into support. However, bears failed to wrap up the closing print at the LOD or dead lows so we’ll see if we can stalk for the lower highs setup in the coming sessions.

The main takeaway from this session is that the bears finally accomplished their goal from the past few days by actually closing below the daily 20EMA decisively. This is quite important because it’s a feat that hasn’t been done in 2 months. Now, it’s obvious what they need to do, they need to sustain the short-term downside pressure in order to open up the range.

Obviously, we must be mentally prepared if the market decides to break our important April low 2844 "sh-t hits the fan" level in the coming days or weeks as we’ve been mentally prepared since the end of April. If not, then we’re just going to trade in a larger 100~ point rangebound setting doing the same old consolidation/basing pattern before a new ramp into higher highs.

These 5 sessions of May have retraced majority of the April gains already so traders ought to continue to be nimble in this environment like our proprietary signals had warned at the end of April. This month of May is all about guerilla warfare execution in order to generate quick alpha. No need to overstay our welcome, quick in and outs.

Daily closed at 2890.75 losing about 20 points vs. the prior day’s print. Today’s daily candle showcases a very clear top and bottom wick showcasing an indecisive closing print for the inflection point. We didn’t get the projected inside day today so we must be aware that Wednesday being stuck 2930.5-2862.5 if overnight just consolidates within the range. Trapping more market participants before the real winner appears.

We’re stalking the lower highs setup potential in the 2895-2915 STFR zone with max risk being 2931 for a chance to run it back to 2840-2800. Wait and see for now because it heavily relies on how overnight/tomorrow/next couple days play out. If price action develops back as a V-bottom or basing setup then we go back to drawing board. Nothing fancy here as we play the odds vs. the level by level approach

Clear and concise context for May (end of April monthly report):

The bull train rode the daily 8EMAtrain tracks for the past 22 sessions in a textbook acceleration pattern. And we have closed at the dead highs for April as expected so the momentum and follow through has been great. Now, the market is at a key juncture as a lot of levels are aligning around this 2970-3000 confluence zone. This just means two scenarios; straight up capitulation riding the daily BB up like Dec 2017~ or we finally get some mean reversion playbook. This also means managing risk exposure here is quite pivotal/important because of the expansion above all time highs already opening up ‘sky is the limit’ potential. Obviously, we must stay 4 steps ahead of everybody and lock in some short-term alpha as we hit our target levels and then aggressively manage our positions across the board whether it’s in higher beta sector or the rip in your face stocks that are just set and forget.

Try to condition yourself and don’t get too hyped up here because the real easy money has been made already in April (and Jan-March) as it was all about not messing up the buys vs. LOD/higher lows execution almost every day. For May, our proprietary extreme signals are currently telling us to be extra nimble again and not get complacent here as it should not be as easy. In simplest terms, we may have to utilize more of a guerilla warfare trading tactics while trading this ongoing train vs. the general more relaxed style that we had demonstrated for the past few weeks doing alpha scalps+buy and hold. This way we will protect ourselves even if the shit hits the fan with a quick mean reversion for the short-term; it really doesn’t matter to us given our level by level approach. 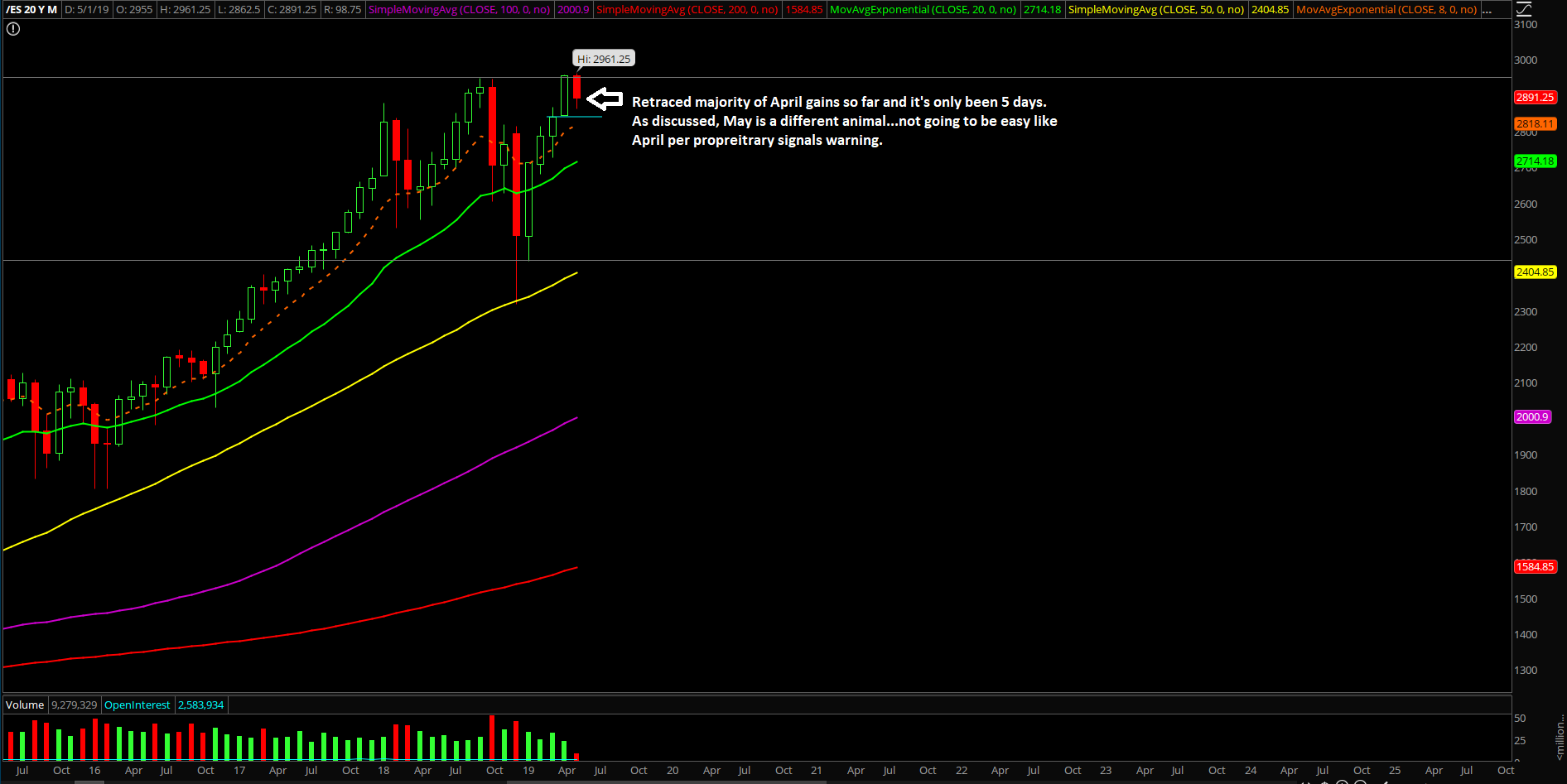 ES MAY7REVIEW6
Ricky Wen is an analyst at ElliottWaveTrader.net, where he writes a nightly market column and hosts the ES Trade Alerts premium subscription service.