The first week of December was a bear domination week, and the weekly chart is now threatening the bear sandwich setup we discussed previously. If you recall, the week started with the bulls failing to sustain above 2800 on the S&P 500 and go for the continuation target higher, so the opposing side took advantage of the situation.

The bears made a quick full retracement of the Sunday gap up of 2764 on Tuesday and eventually retraced back into the prior week’s 2630s range low area by the end of the week. Essentially, the market demonstrated how effective the STFR (sell the f'in rally) strategy became as the market failed to hold the G20 gap up and crapped.

The main takeaway of the week is that bears now have a chance to actually open up the downside range and possibly escape the inside month ranges. If we look at the higher timeframe, charts such as weekly and monthly are hovering at the lows again and threatening the bearish breakdown setup. Weekly chart pretty much has a textbook bear sandwich setup where the double bottom could not sustain and bears nullified all the gains from the 2800 area.

Friday closed at 2636.75 around the lows of the day and also week. As discussed, it’s a weekly bear sandwich setup, so we have to be mindful of the possibility of a breakdown acceleration outside of the October monthly range(2603-2944.75).

Heading into the second week of December, we’re currently treating any bounce below 2680 as a dead-cat and short-able. Hence, we’re also going to continue to utilize the STFR strategy as it’s been quite profitable following the trend, at least until the action changes and we may need to hop on the northbound train instead.

The current floor we’re using remains the same with the 2603-2626 zone based on last week’s charts. If the floor does not hold, then the gates would immediately be opened towards 2580, 2552, 2529 as continuation targets. These are levels from earlier this year’s prior lows and where they were stick-saved. 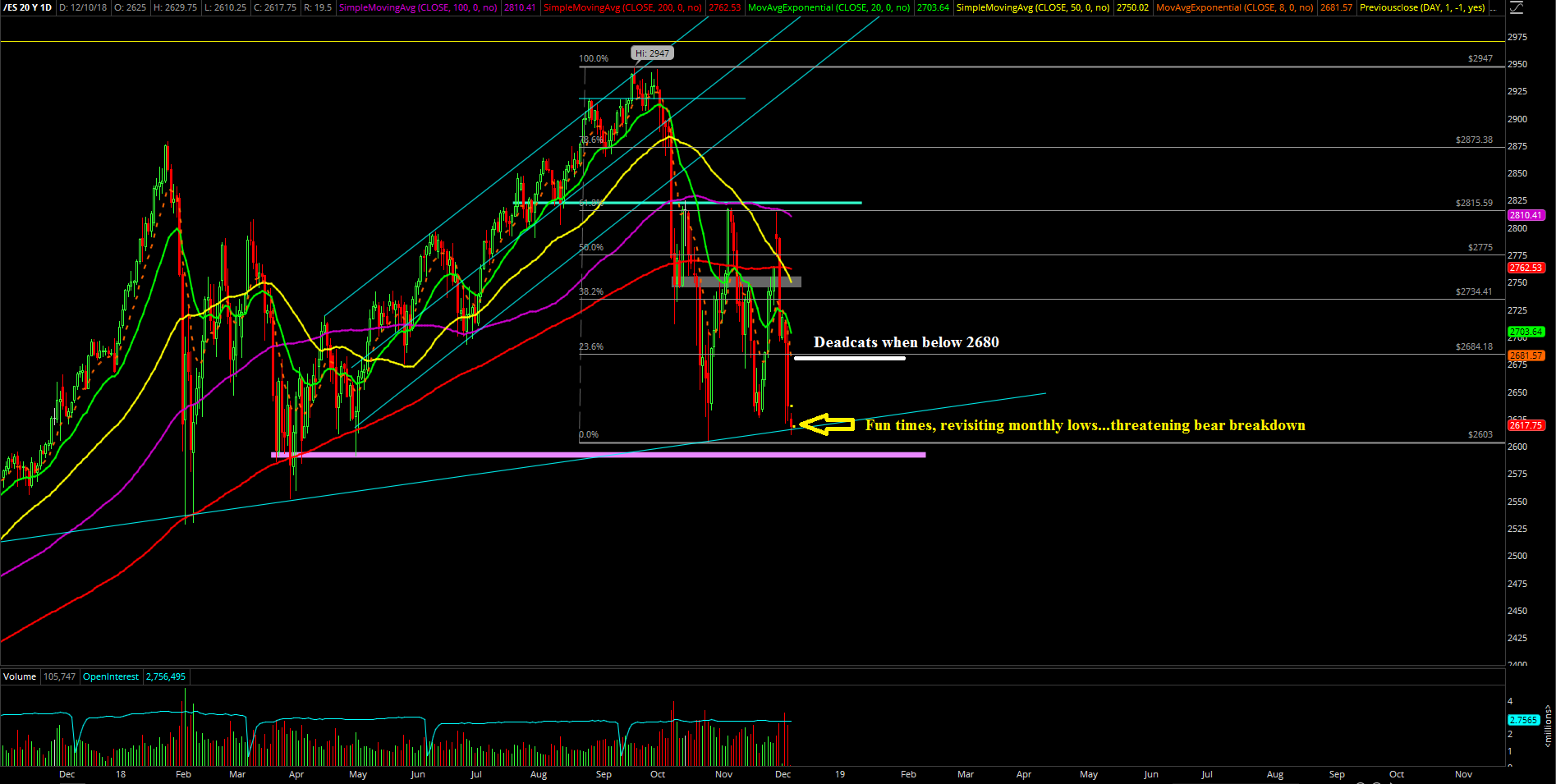 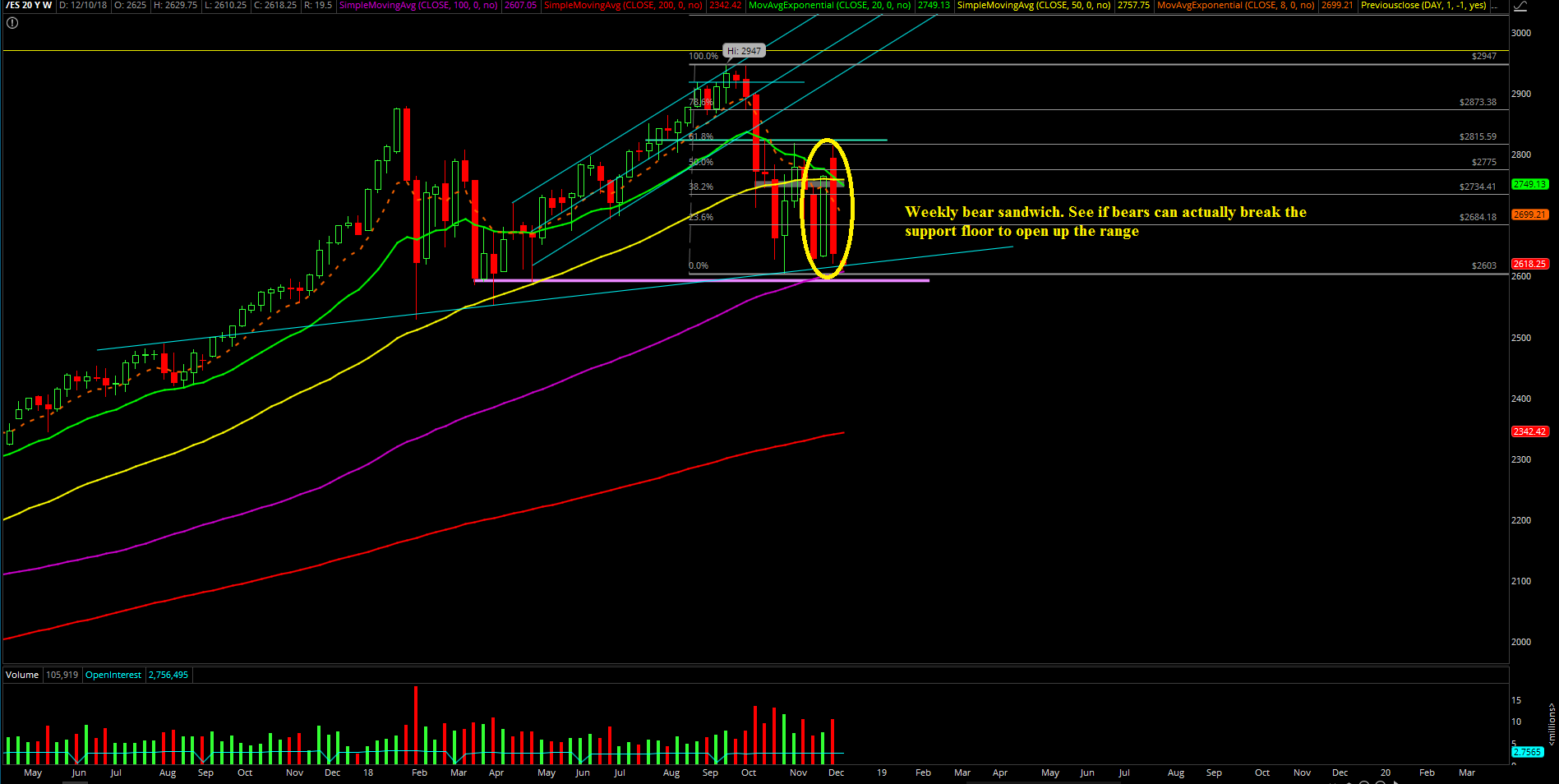 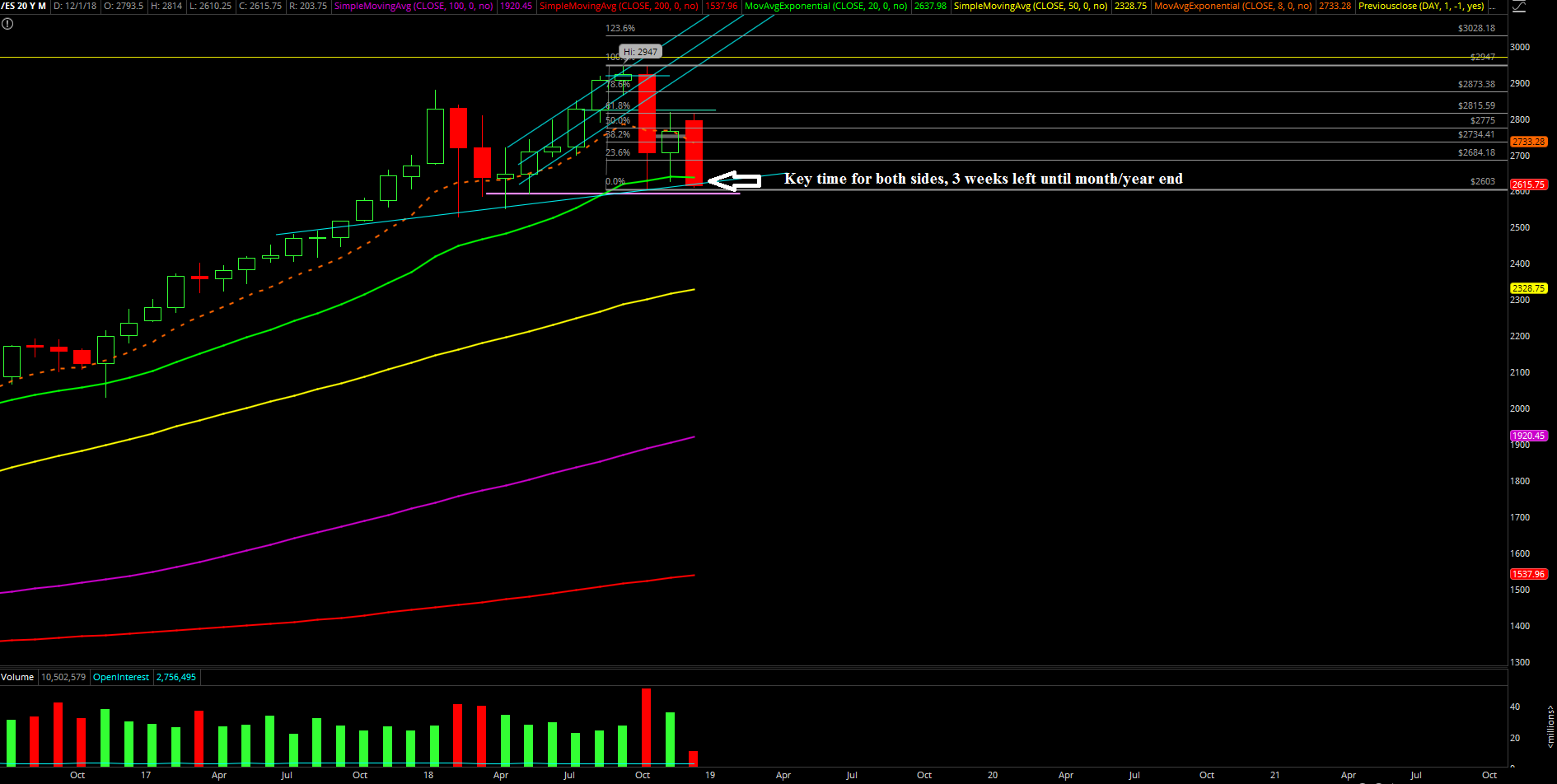 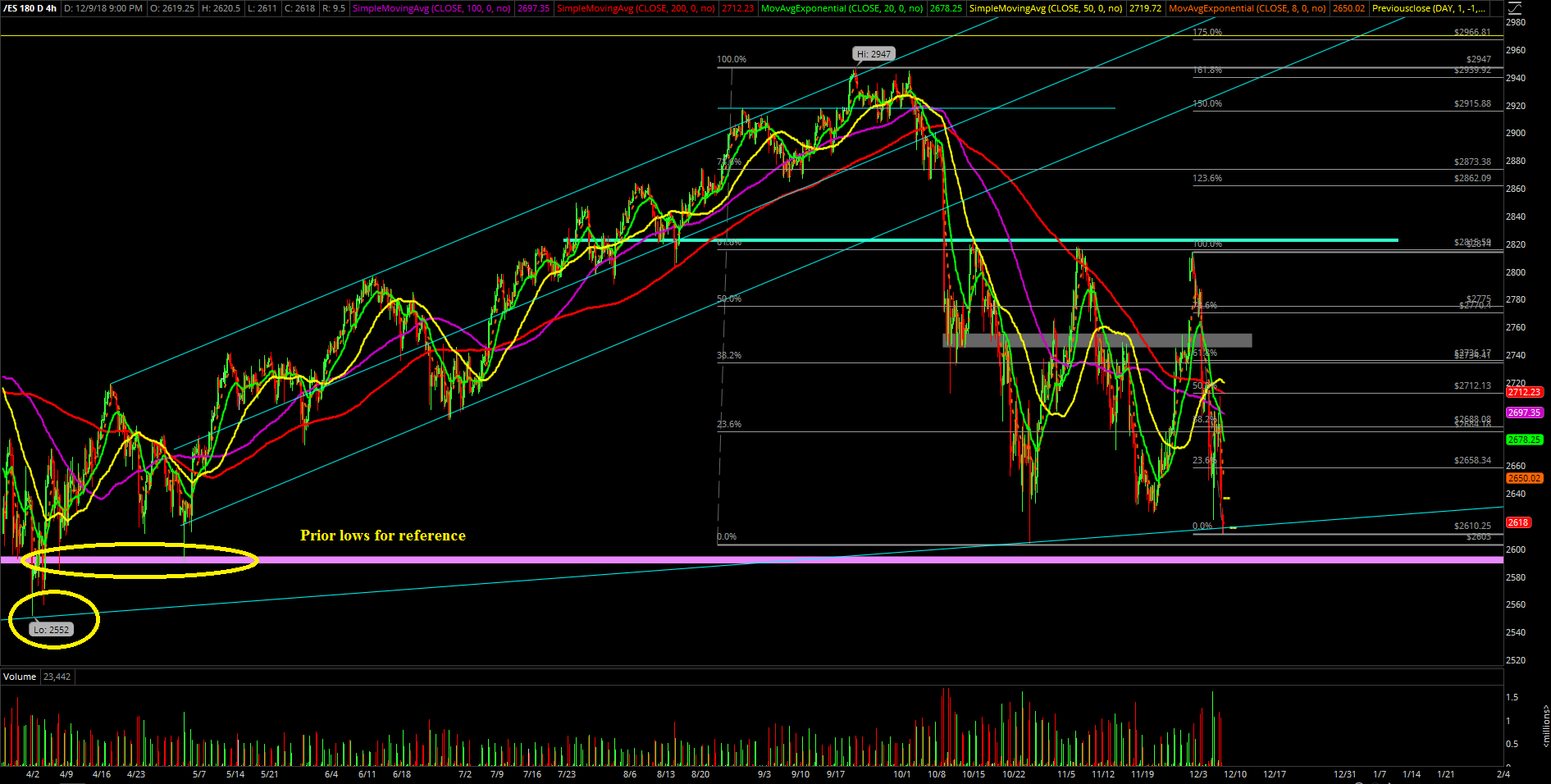 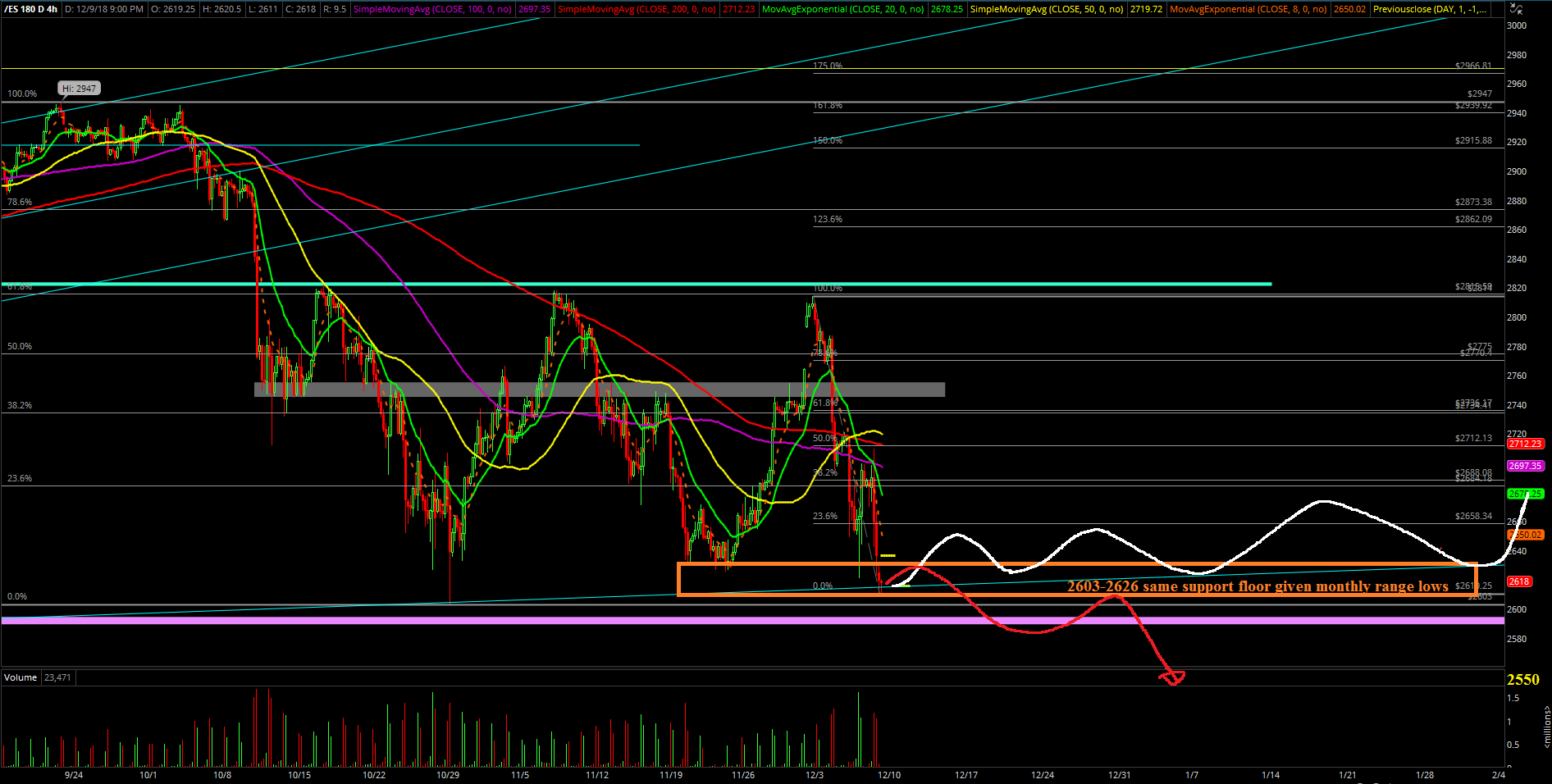 es dec9review5
Ricky Wen is an analyst at ElliottWaveTrader.net, where he writes a nightly market column and hosts the ES Trade Alerts premium subscription service.