The third week of September went according to plan for the most part as the bulls were able to defend the 2880 must-hold support level on the S&P 500. If you recall, the low of the week "stick-save" at 2883.5 from Monday night managed to kickstart the market with a fast and furious V-shape reversal. Eventually, the 2920s measured move target from the prior week was finally fulfilled and the market opened up the ongoing extension move towards the 2960-2970 target.

The main takeaway from the week was that the sneaky bears tried their best to break the 2880 must hold support, but they were no match for the ongoing bull trend as the stick-saves have been happening almost every time in recent memory. Hence, the vicious cycle stop-outs/chasers and feedback loops continue until something significant actually changes the short-term picture. If you paid close attention, the pattern is pretty much the same as in the first half of September when our 2863 must-hold level held perfectly with the 2865 stick-save.  The bull train keeps holding at the same old daily 20 exponential moving average (EMA), with must-hold support simply moving up.

Friday closed at 2932.25 as a consolidation session for quadruple witching after the large Thursday breakout candle above the 2918 prior all time high area.

Heading into the last week of September, our perspective remains the same with the next measured move target in the 2960-2970 zone after fulfilling the 2920s already. The must-hold support level in terms of immediate trending purposes have moved up to the 2900-09 area. Essentially, anything is considered a BTFD opportunity when above daily 20EMA given that price action is still in a trending and acceleration phase. For reference, riders of the bull train have fastened their seatbelts and hopefully enjoying a simple ride of tight risk versus 5x reward (or more) towards the aforementioned destination.

Obviously, bears would need a break below the 2900 area to really flip the immediate short-term trend and open back up the immediate downside pressure like back to the prior must-hold 2880 level. Until bears could accomplish such a task, it’s like déjà vu with the BTFD strategy. 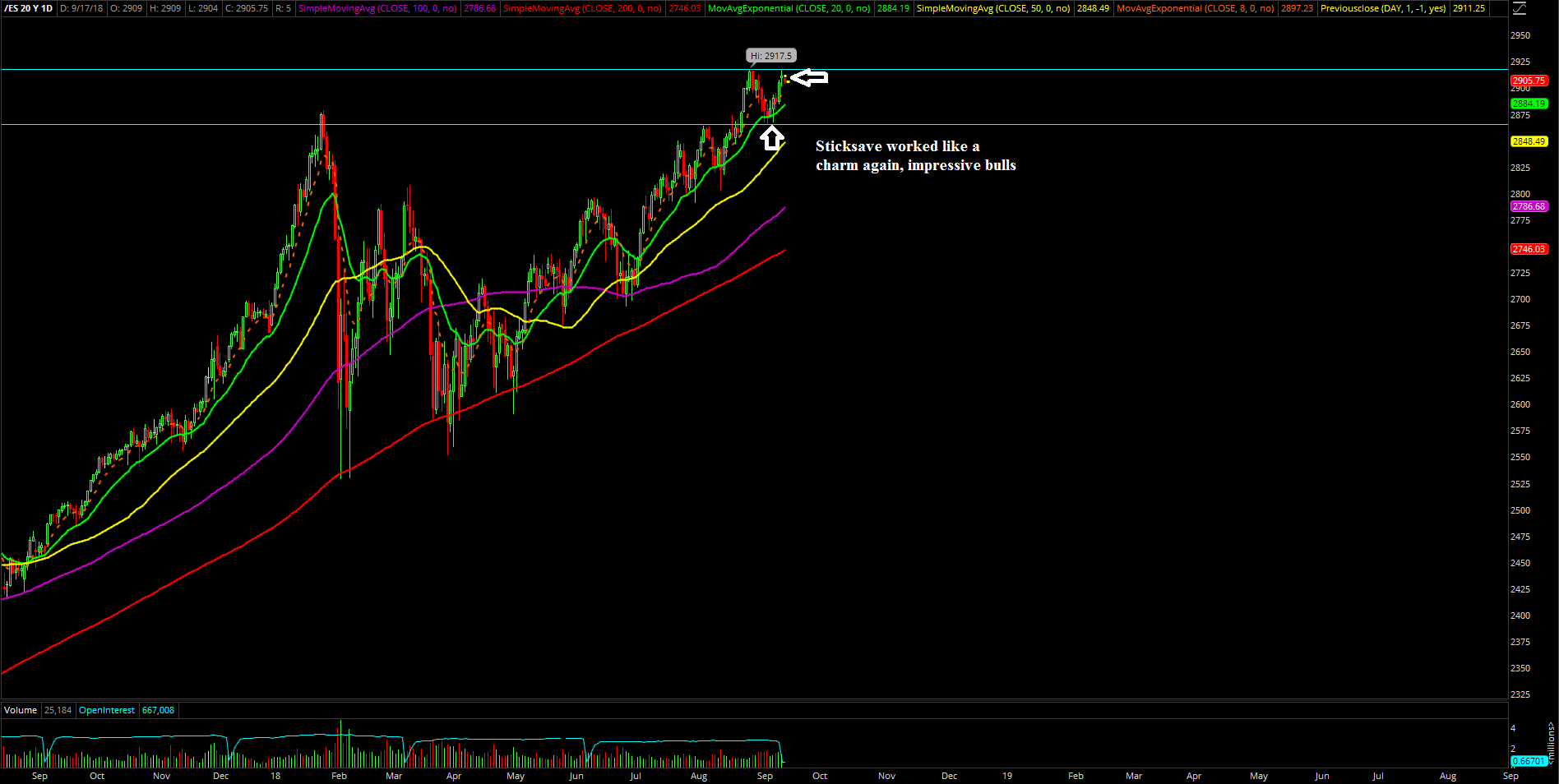 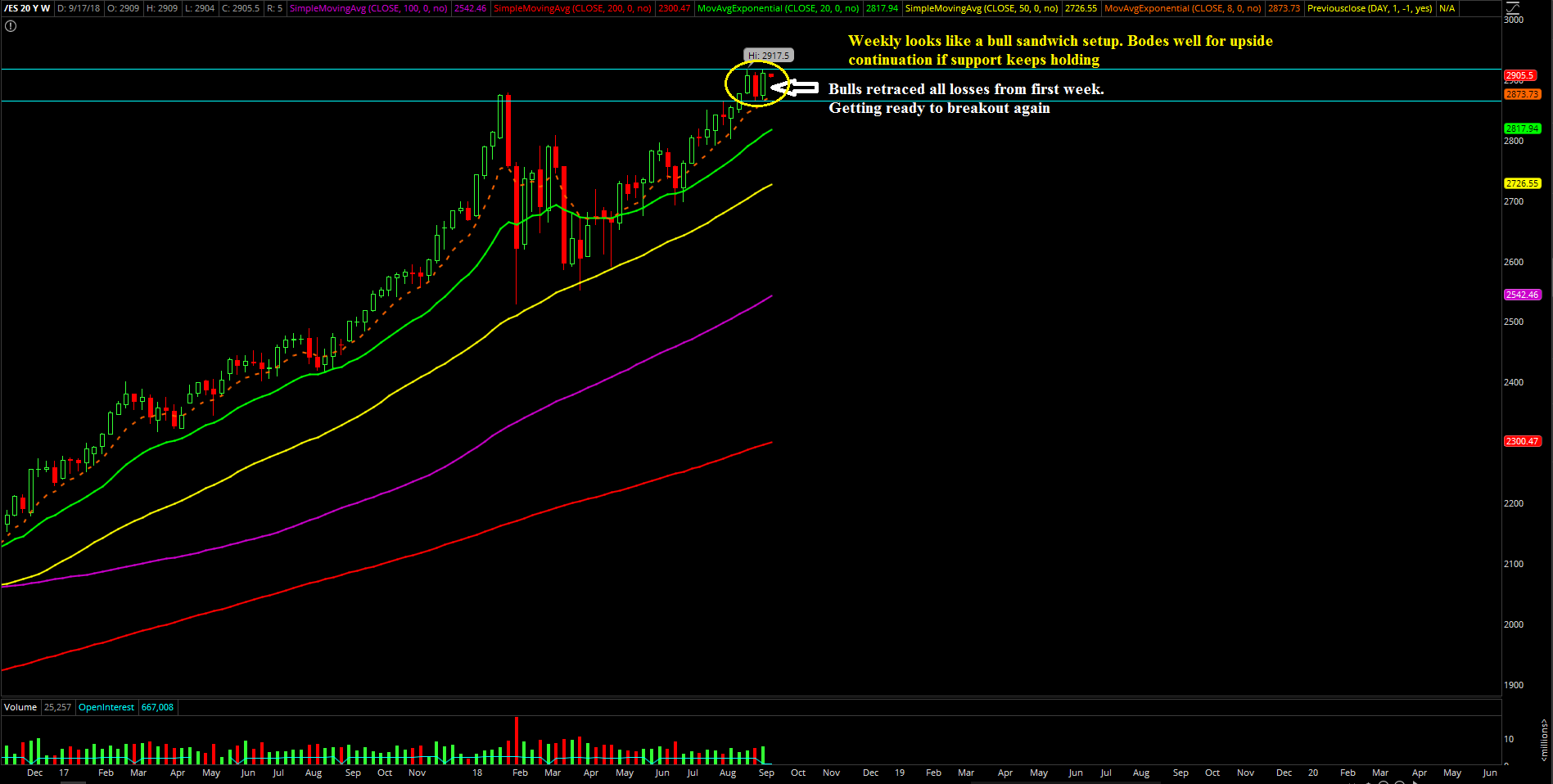 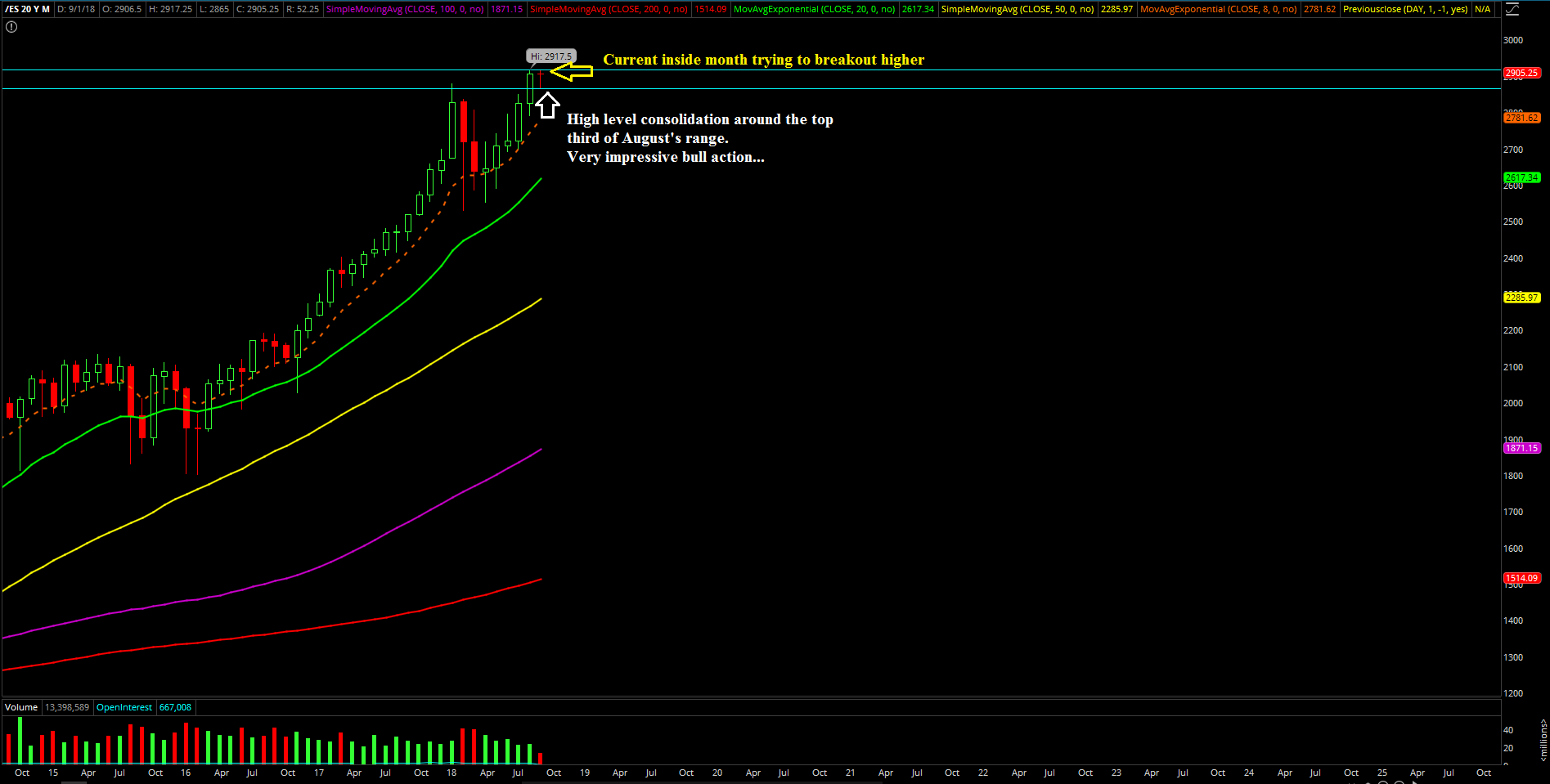 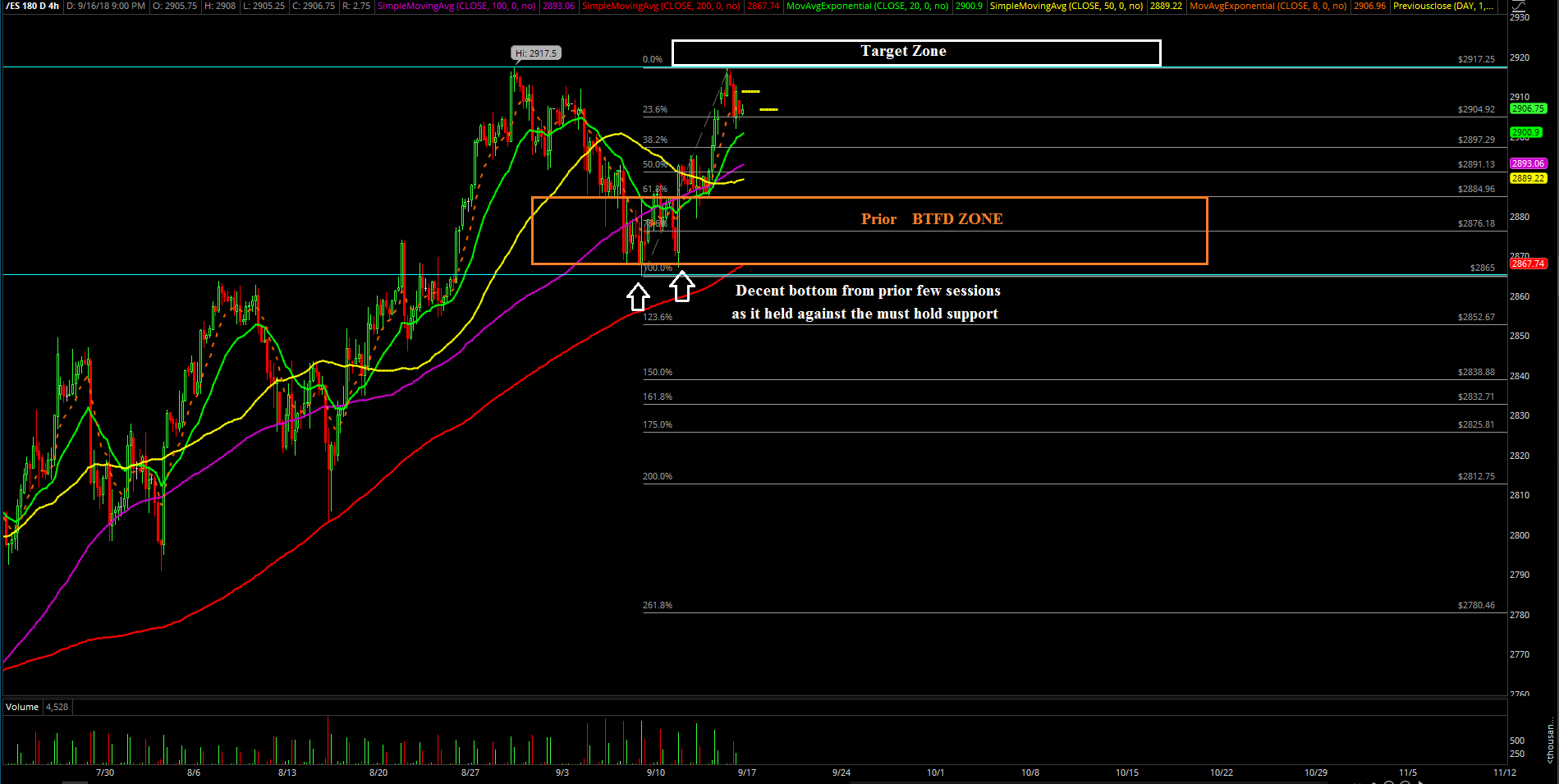 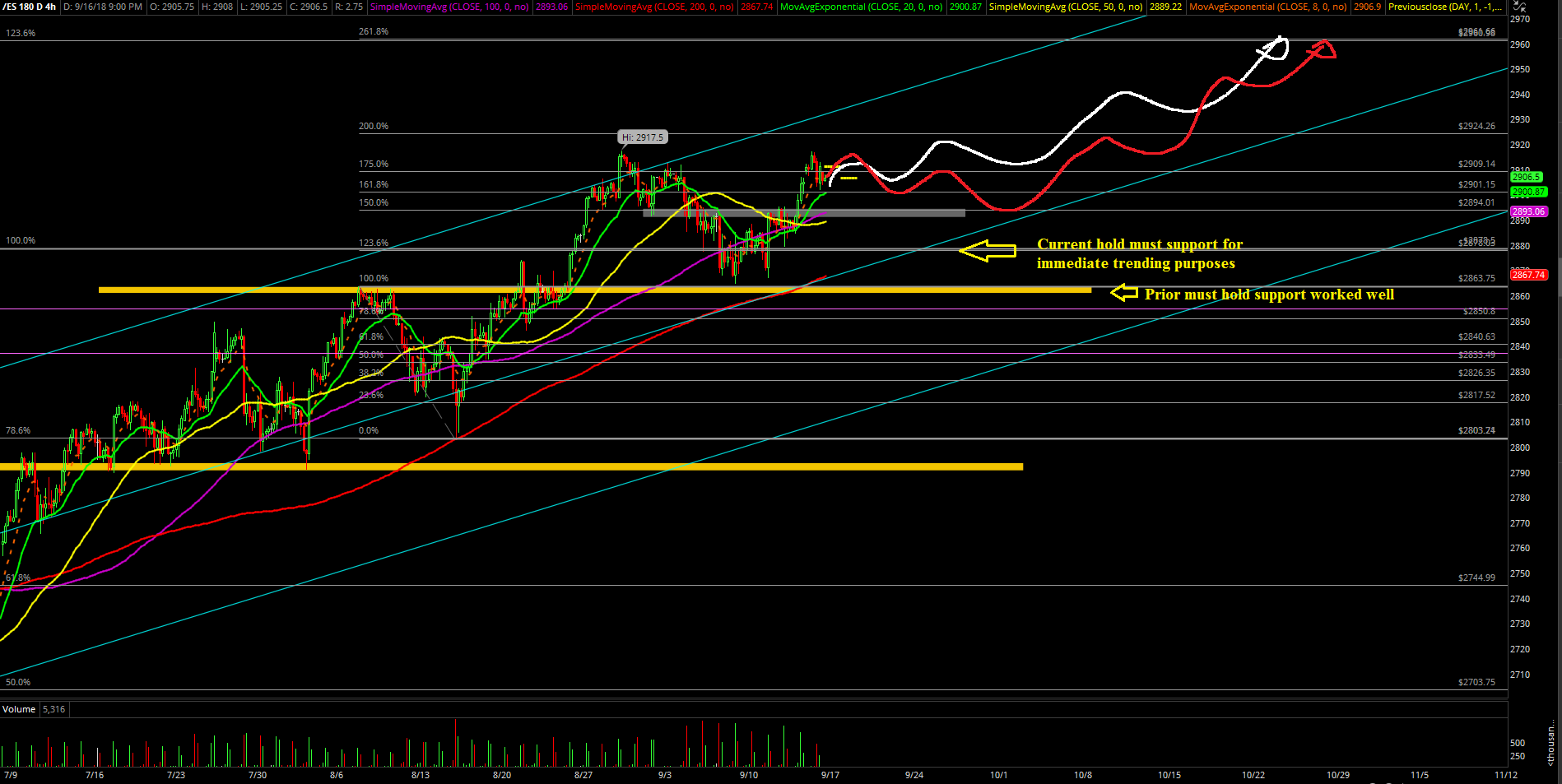 es sept16review5
Ricky Wen is an analyst at ElliottWaveTrader.net, where he writes a nightly market column and hosts the ES Trade Alerts premium subscription service.