Monday's session was very simple because it was just a repeat of Thursday’s likely pre-determined range day bias. Basically, the market showcased an overall range of the 2923 range high versus the 2889 range low from last week. In simplest terms, today was just a repeat of the same old pattern; form a range low in the morning and backtest the gap fill level/range high resistance.

We executed the same game plan the past couple sessions doing BTFD at the range low and selling at the range high for the highest probability portion of the train ride. Like we demonstrated in the ES trading room, if the market decides to keep gifting us the easy money setups according to our levels, then we do not argue against the trend/ongoing mental prep. We executed the game plan by taking the highest probability portion of the money in order to save our physical and mental capital from evaporating a few brain cells; no need to look at a horizontal bull flag stuck in a 2-3 point range like today’s brunch time 11:30-3:00. Eventually, price broke out during the final few minutes of regular trading hours as the white towels were thrown in by the bears, very similar to what occurred on Thursday. Overall, it was a very low volume day for ES with less than 700k contracts traded due to Easter Monday and all of European markets being closed. Lowest volume of the year if my stats aren’t deceiving me.

The main takeaway from this session is that the bears have obviously failed their 2920s micro double top setup from last week as Thursday, and today were both high level consolidations holding above support. It’s déjà vu again and now the billion dollar question is clear:  When are the bulls going to do the next stampede into ATHs? Last week the ES bulls failed twice when they had clear shots at the immediate acceleration on Tuesday and Wednesday with the gap up and go patterns. Currently, NQ already at all time highs, ES lagging. Seems like everybody and their mother has to resort to chasing/rotating into higher beta stocks or get fired for underperformance? There are lots of earnings this week and upcoming month end so we’re going to stay nimble and vigilant as we lock in more alpha for April.

Daily closed at 2913 so the market gained a couple points vs. Thursday’s end of week print. These past 5 sessions have been high level consolidation so we’re aware that the bulls have rejuvenated and ready to attack the all time highs any moment now. Month end closing is next Tuesday so we know all what that means; the bull train will attempt to close at the dead highs once again like the past few months as long as we keep hovering at the highs here and above trending supports.

2923-2889 overall range within a tighter 2915-2895 range for intraday trading so it’s high level consolidation within an ongoing bull train trend. The moment price action is able to close above 2923 on hourly candle basis then we confirm the bull train is ready for 2947 immediately and beyond because the sky is the limit after that. Bears are dead again at the moment due to the failure to hold below 2900 on Thursday as the bulls managed to do a textbook hammer on the daily chart holding the daily 8EMA train tracks support. Bears need to be resurrected with a minimum close under today’s low of 2899 as that would be a bear engulf on the daily chart if that occurs. Until then, don’t stop the music. Rinse and repeat until the market stops printing money. It’s like riding in a train/car/plane and the kids keep asking, are we there yet?

Clear and concise context for April:

Treat as daily 8/20EMA bull train, but in more of an immediate bullish state because the market/momentum is back in a grind up/breakout acceleration phase. During the last week of March, the bears failed the March 22nd continuation downside setup on breaking below the daily 20EMA as expected so now they are getting squeezed and clobbered up. There were a lot of stops just above the March highs across the indices and the first week of April killed those quickly with the grind up continuation.

For reference, the ES market is less than 1.2% away from ATH so it’s an obvious goal now for the ongoing bull train and vice versa for bears to reject. Bigger picture wise, ride this train until the wheels fall off. On a weekly basis level, the 2844 low is considered the must hold weekly trending support level going forward where any dip is considered an opportunity to BTFD. I'm afraid it's rinse and repeat until free lunch money setups get taken away when the music stops. 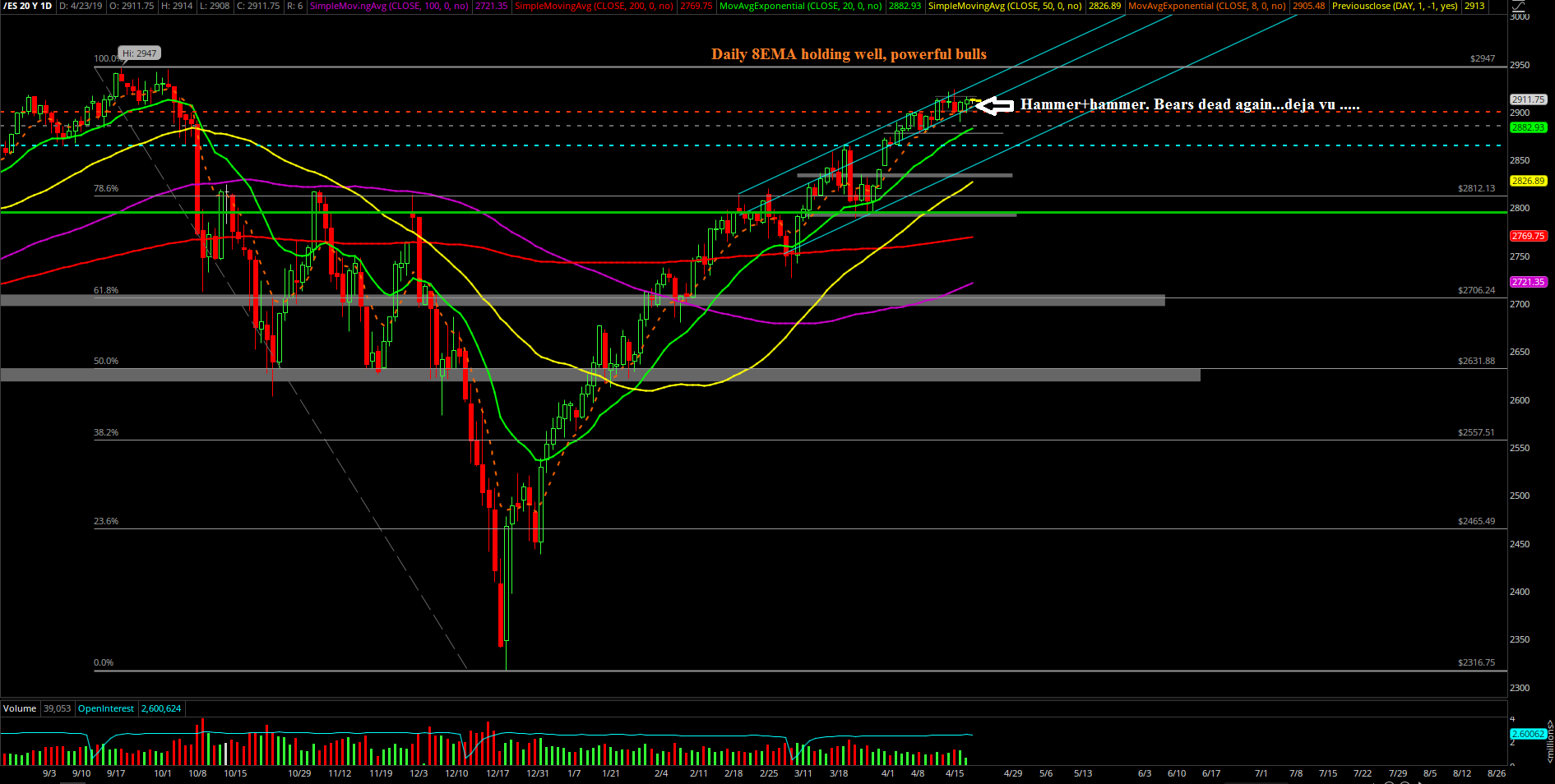 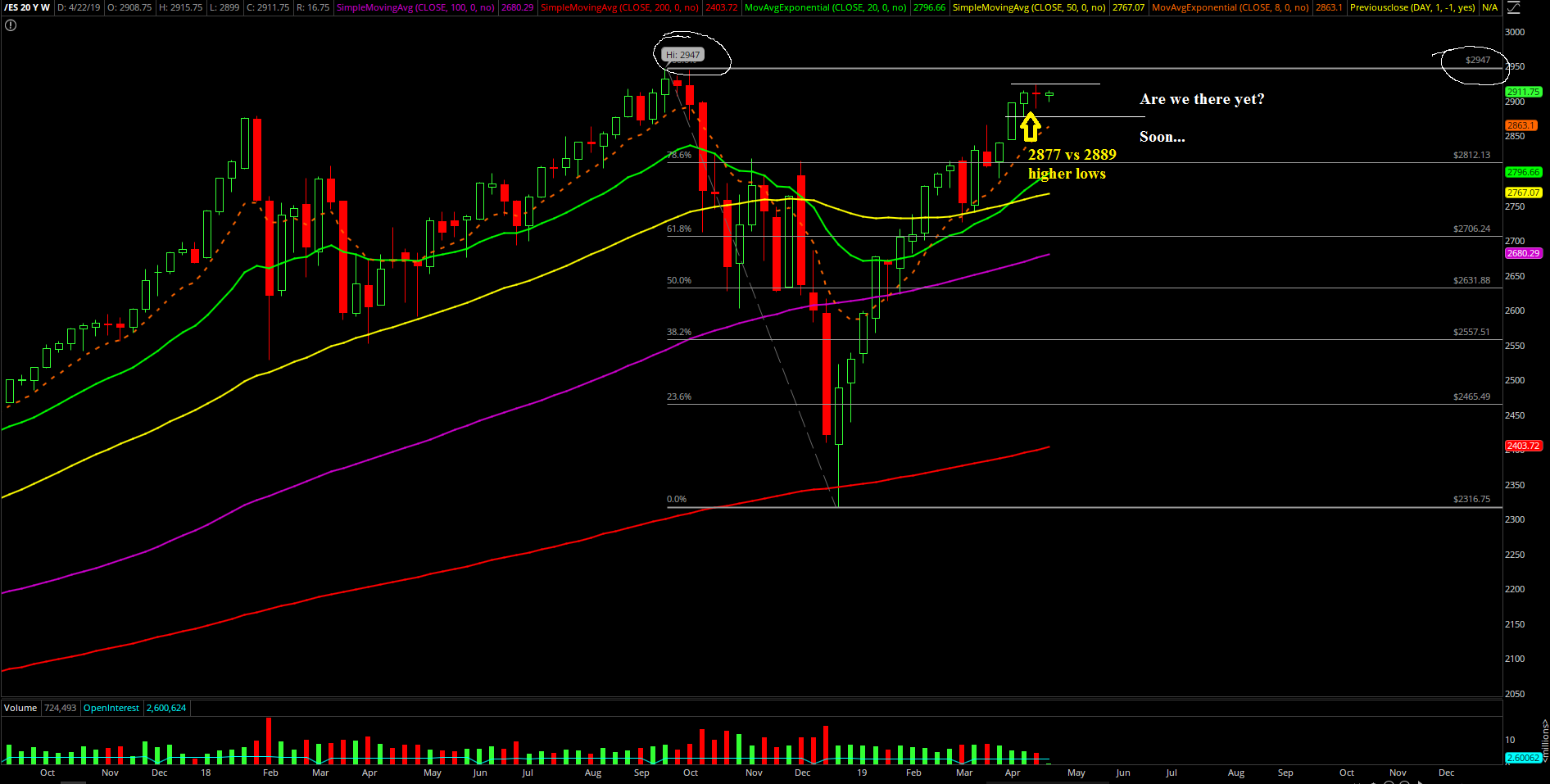 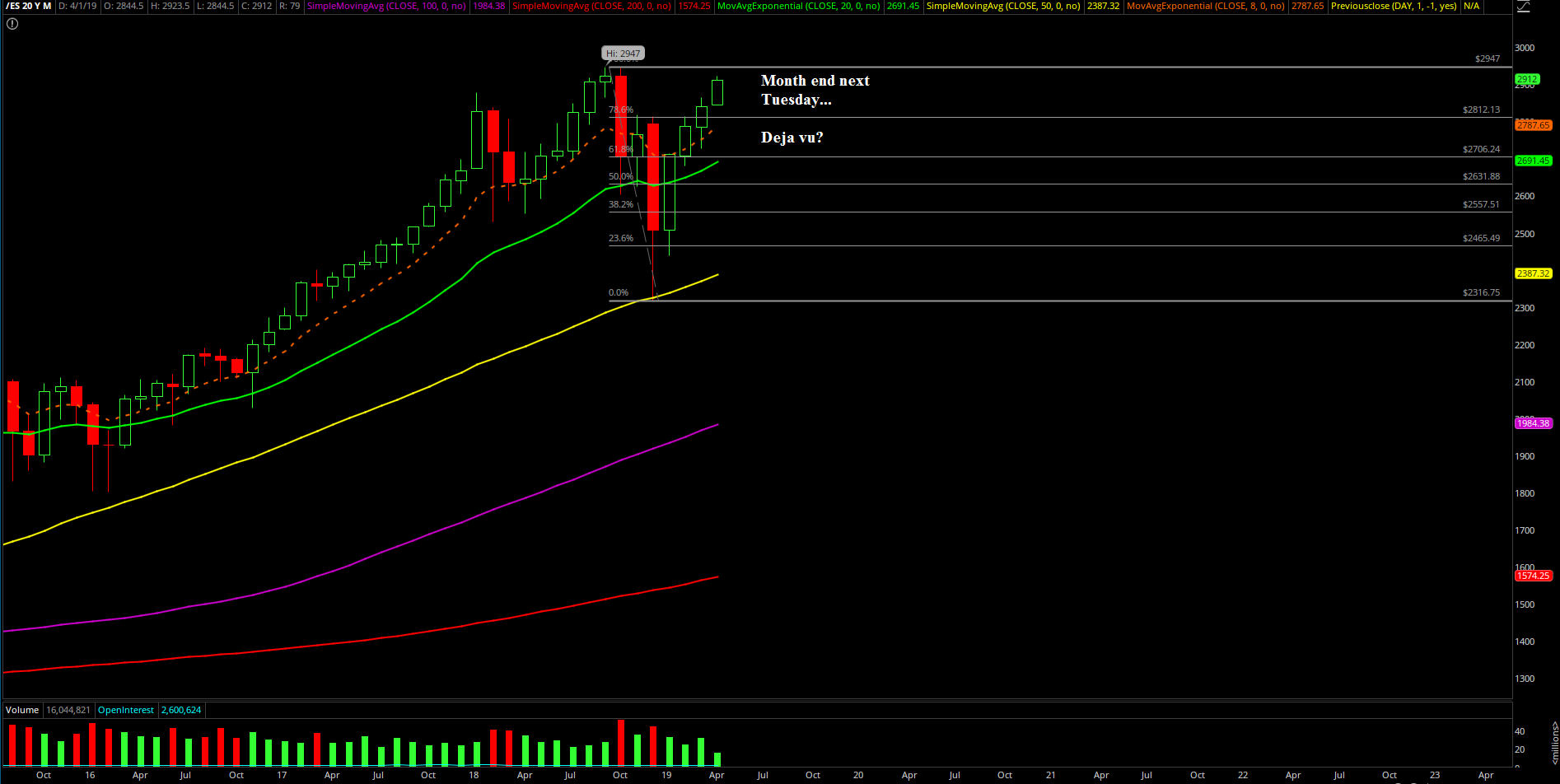 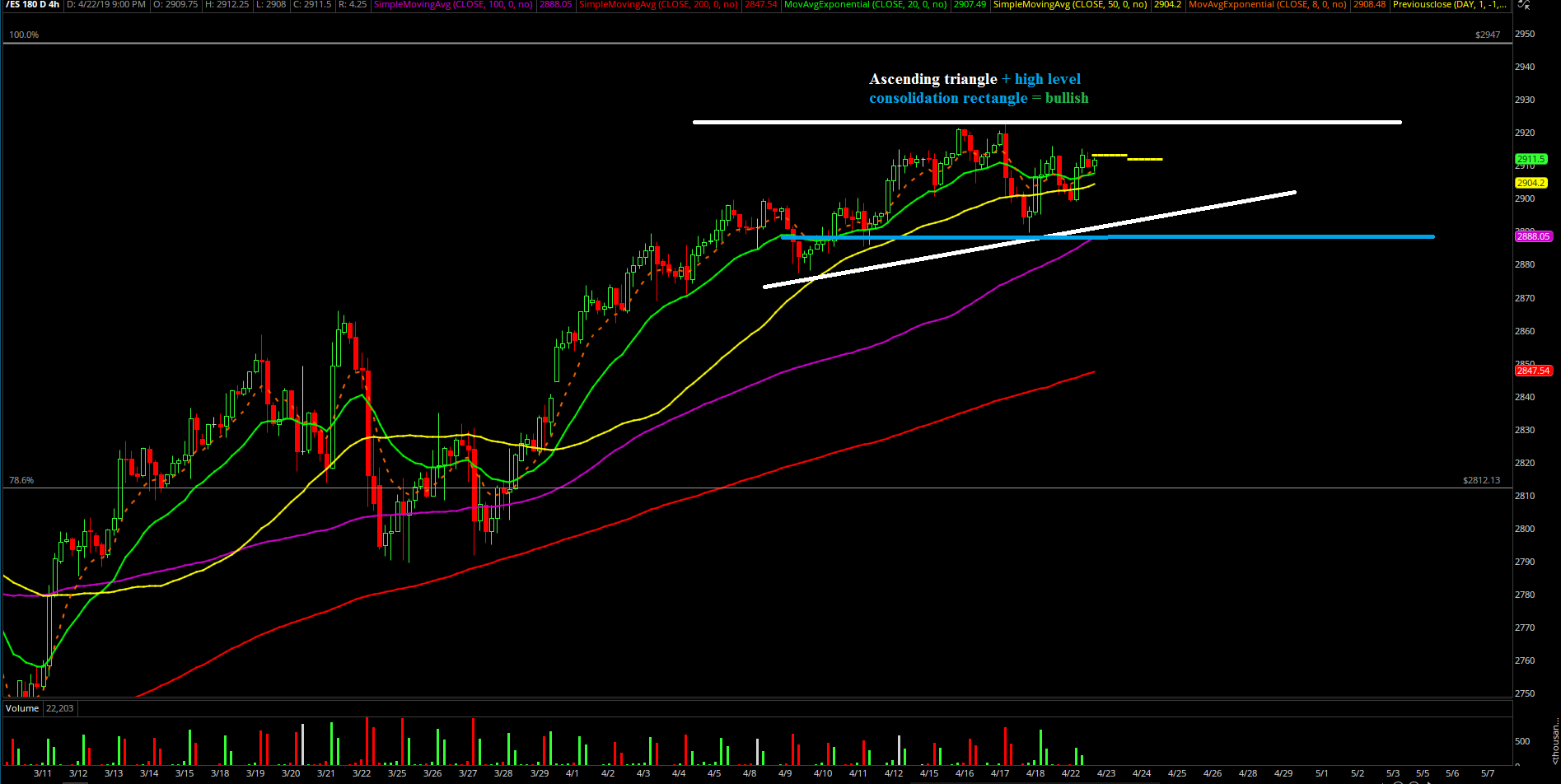 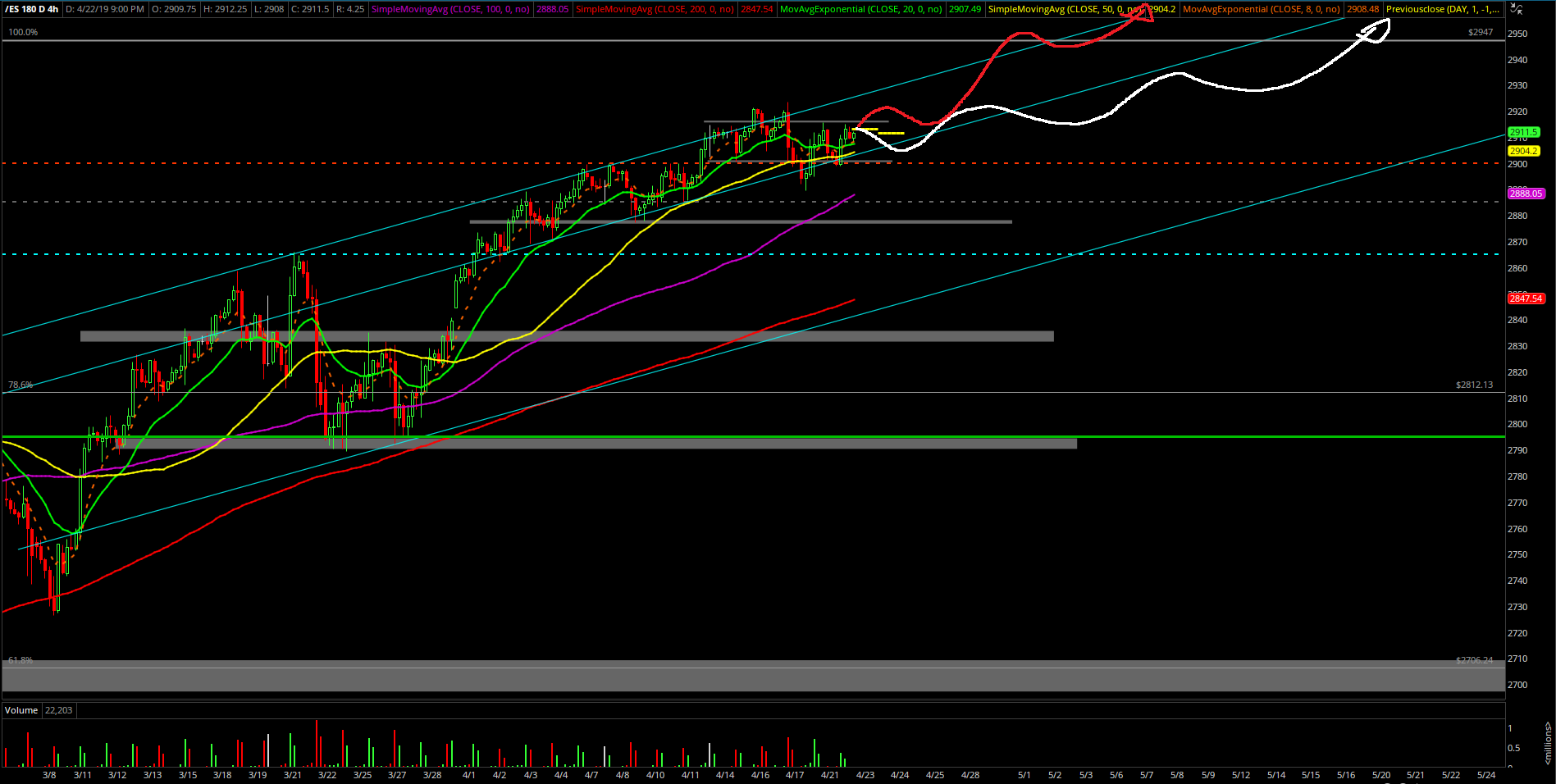 ES APRIL22REVIEW5
Ricky Wen is an analyst at ElliottWaveTrader.net, where he writes a nightly market column and hosts the ES Trade Alerts premium subscription service.