PIMCO Corporate & Income Opportunity Fund (PTY) with a current yield of 8.0% pulled back significantly after reducing its dividends. Investors dumped the stock because they thought it was not covering the dividend.  In fact, it has been fully covering its dividend and has routinely outperformed the coupons of its holdings.

This isn't the first time PTY reduced its dividend. In 2006, it cut the dividend to $0.115/month and didn't raise it back until 2012. The period where PTY's dividend was reduced was a period of dramatic outperformance. 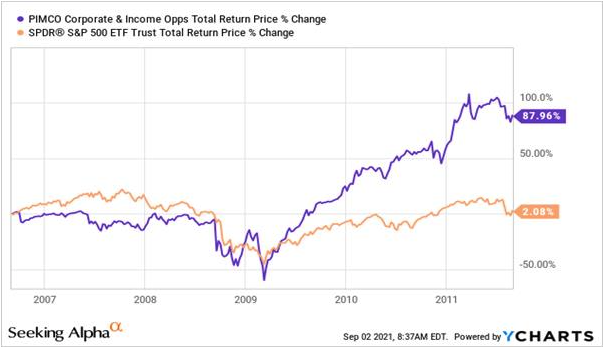 Reasons to Reduce the Dividend

PIMCO has developed its reputation by being wise stewards of shareholder's capital and making decisions that are best for the long-term total return. What is best in the long-term, isn't always popular in the short term. I have complete faith in the management of PIMCO.

I personally have added a large number of shares last Friday following the big dip, and am prepared to buy some more in case the price sees any further pullback. Today, the yield is close to where it was before the distribution reduction so any downside risk should very limited.

PTY is a great pick I have held, and added to, for decades. I love when the market turns bearish, as it is an opportunity for me to add more shares at cheaper prices!

It is only a matter of time until the price recovers in my opinion, as the hunt for yield continues!