Thursday's mood pattern implied some turbulence for the stock market, and an attempt to calm things down. The turbulence was definitely there, as well as what appeared to be the initial phase of a calming down.  Yet, the market ended sharply down.  Our Market Mood Indicator (MMI) was looking for an up close, but it was cautioned not to expect an easy or straightforward trading day. On the plus side, the market gave us the "sharp drop by October 5" from the weekly forecast with this drop that began Wednesday.  The question is:  Is it over?

Friday's mood pattern usually points to risk aversion, yet MMI is calculating an up close in the market.  Does that mean that the bears get scared and shorts get covered?  Whatever it means, it's probably not a good idea to simply assume that the bottom is in and hope for the best.  There are no high probability calls at the moment.  It's treacherous trading territory.

Our MMI is based on analysis of search data, and current Internet search theme MMI inputs are men, sports, losers, hero.

Here's how the mood signal has tracked with the actual S&P 500 moves short-term.

The primary outlook is that a corrective move is in progress.  Weekly charts are nearly flat over the next several weeks.   Monthly charts show (roughly) October as a low.

Looking at the charts below, the long term forecast chart shows sentiment turning down from the same "ceiling" as it did the end of June.  Yet, so far, the market is undaunted and just keeps climbing.  Long term trend strength per the LTTI is back above 30, which is about as high as it has gone this year.  The trend is strongly bullish, but may not be sustainable.  Something has got to give, and it should be fairly soon. 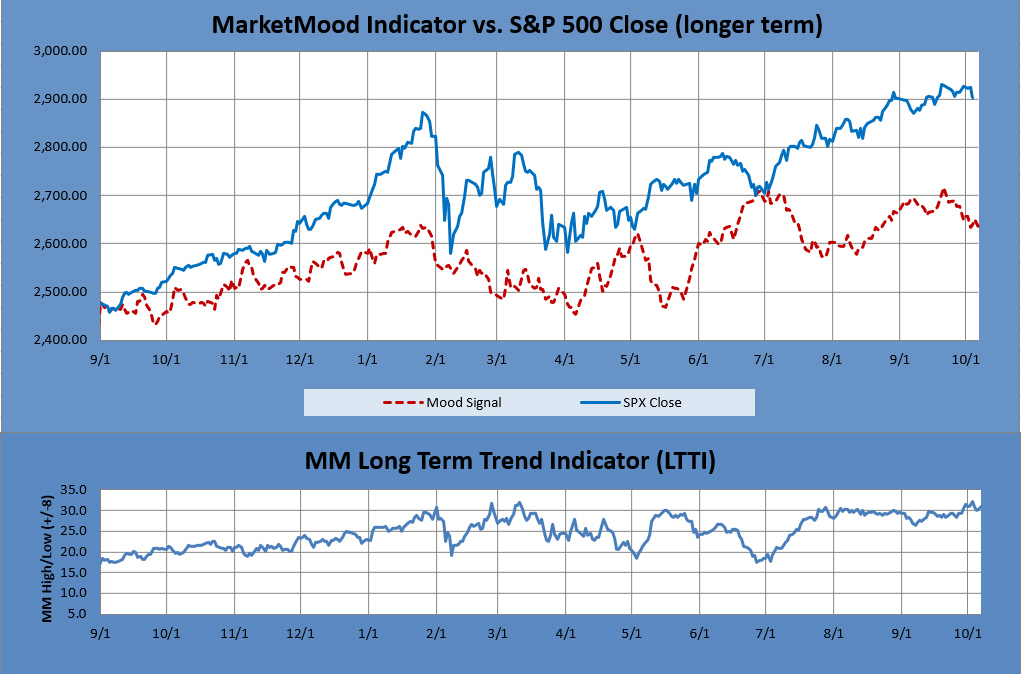