As I have mentioned many times, I am very much open to having a long term bottom having been struck, even though the bottoms in GLD and silver have looked incomplete. It will be very hard to argue with a 5 wave structure made off the lows, but, we still do not have a confident 5 wave structure off the lows.

The clearest and cleanest pattern seems to be the GDX. As I stated over the weekend, I have wanted to see the GDX rally to at least the 21/22 region to complete 5 waves off the recent lows to make it much more likely that long term correction has completed and the bull market has reinstated itself. But, thus far, I only have what counts best as 3 waves off the lows, and the potential still exists that lower lows can be seen.

Today, the market slightly broke down below the support we were watching at 16.35-16.45, at the bottom of our support box. But, it quickly rallied back over the support, so the drop was not significant. Moreover, the move up looked impulsive, thus far, but not ideal by any stretch of the imagination. If we had not had a long term correction already, I would question this micro 5 up much more. But, for now, I am going to give it the benefit of the doubt. As long as we do not break down below today's lows, I will continue to look higher to complete 5 waves up.

As I have also been saying, thus far, the GDX has been adhering to standard Fibonacci Pinball extensions. Normally, that would get me quite excited. However, when we deal with the metals and miners, it is unusual for us to be adhering to standard extensions. Normally, we would be seeing extensions much stronger than standards, and that has me a bit concerned. For this reason, I am tracking this last pullback as a potential wave ii pullback in wave (v) of 3, which would have us targeting the 21 region for just wave 3, which makes the 22-23 region much more likely for all 5 waves. That count is presented in green. But, as long as we are able to reach at least the 20-21 region, I can view it as 5 waves off the lows, but will be more cautious on a wave ii pullback.

Also, as you can see, if we cannot move through this week's high, I am going to count it as the top of another 4th wave, as labeled in red, and it makes it much more likely that we are going to see a lower low in the GDX.

So, not much has changed since my last update, as we are still seeking confirmation that a bottom has been seen in the metals. And, while I am not willing to aggressively short this market, my core hedges will remain intact until the market provides us with more proof that the market has bottomed. 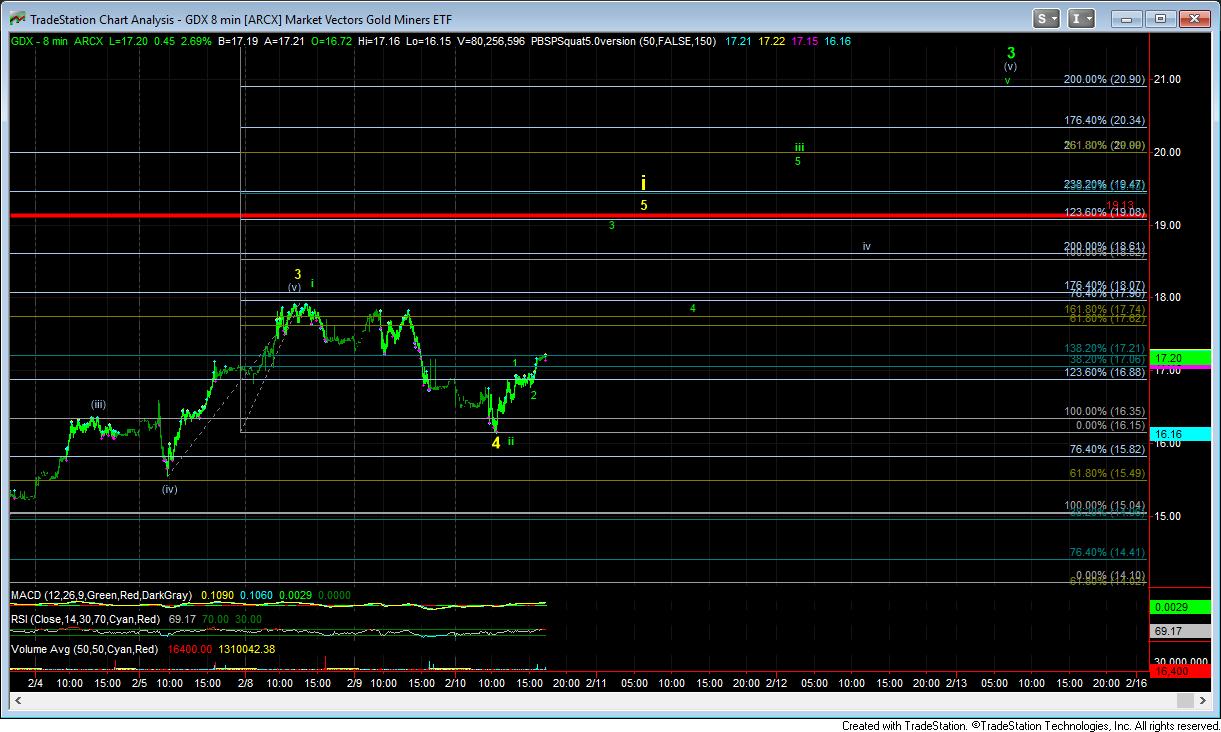