Something To Keep An Eye On

Intermediate-term write-ups and charts are included on Sunday night reports.

Both Ether and Bitcoin are trying to bottom today, so we have something to watch closely.

Bitcoin has moved over resistance. However, we only have three waves so far. Further, I would have liked to see Bitcoin flush down to $52,300 for a clearer fifth wave down. However, if I see five waves, and three waves that retrace at least .382 of said five waves, I will assume the bottom is in. Or, at least will trade it like it is. I don't have clear levels to offer just yet because this move off of the low is still in progress. 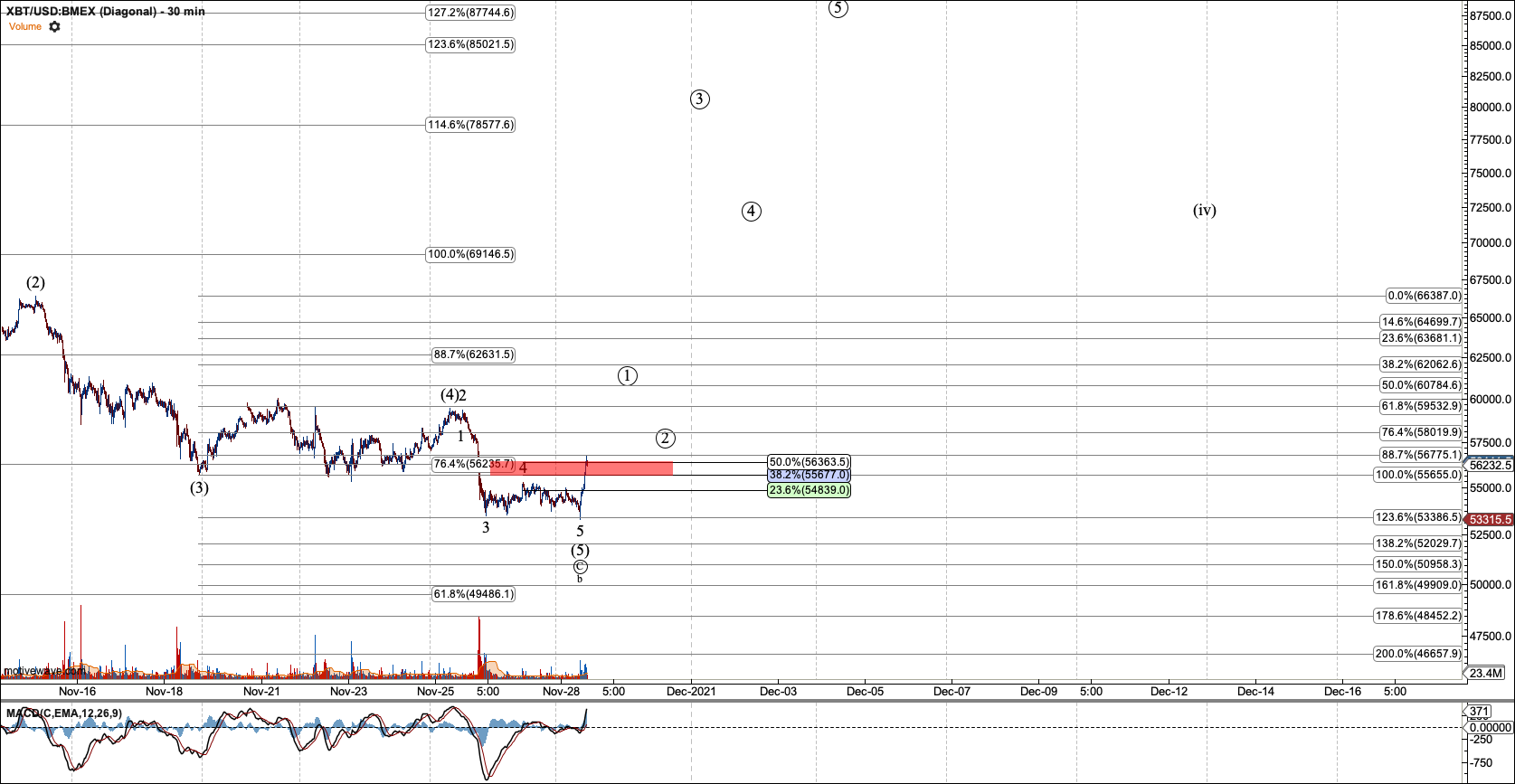 Yesterday on the webinar I warned about the red count. We are at a key point here in the red count, being up three waves over resistance in the black count.  However, we need either five waves for circle-1 or a break over $4553 to invalidate the red count. 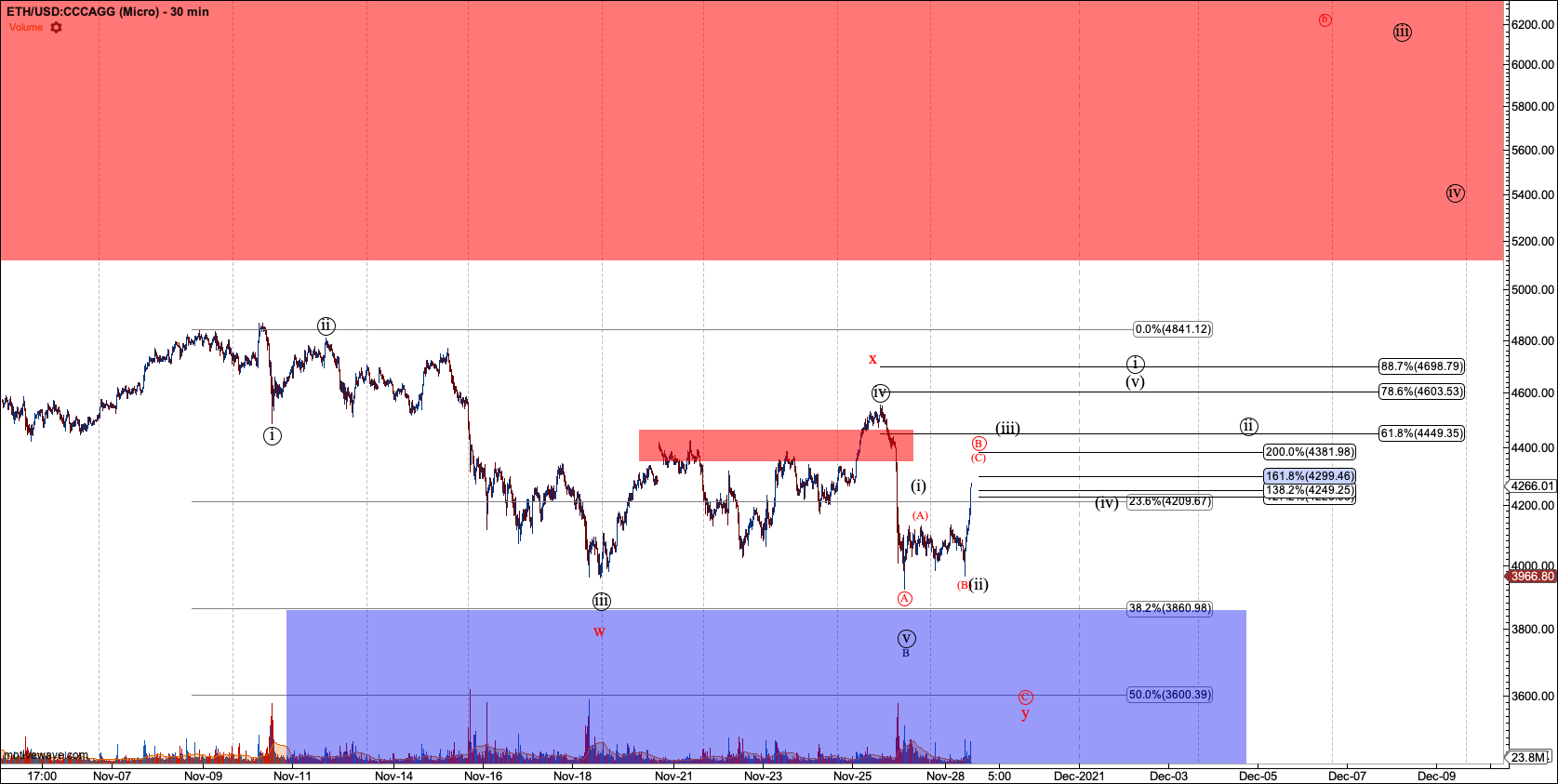 ETHBTC took out the previous d wave top, so I am committed to the red count and expect this pair to march to 0.10. Note, if we take out (II), I'll mark lower support for that wave, however breaching (II) is not expected at this time. 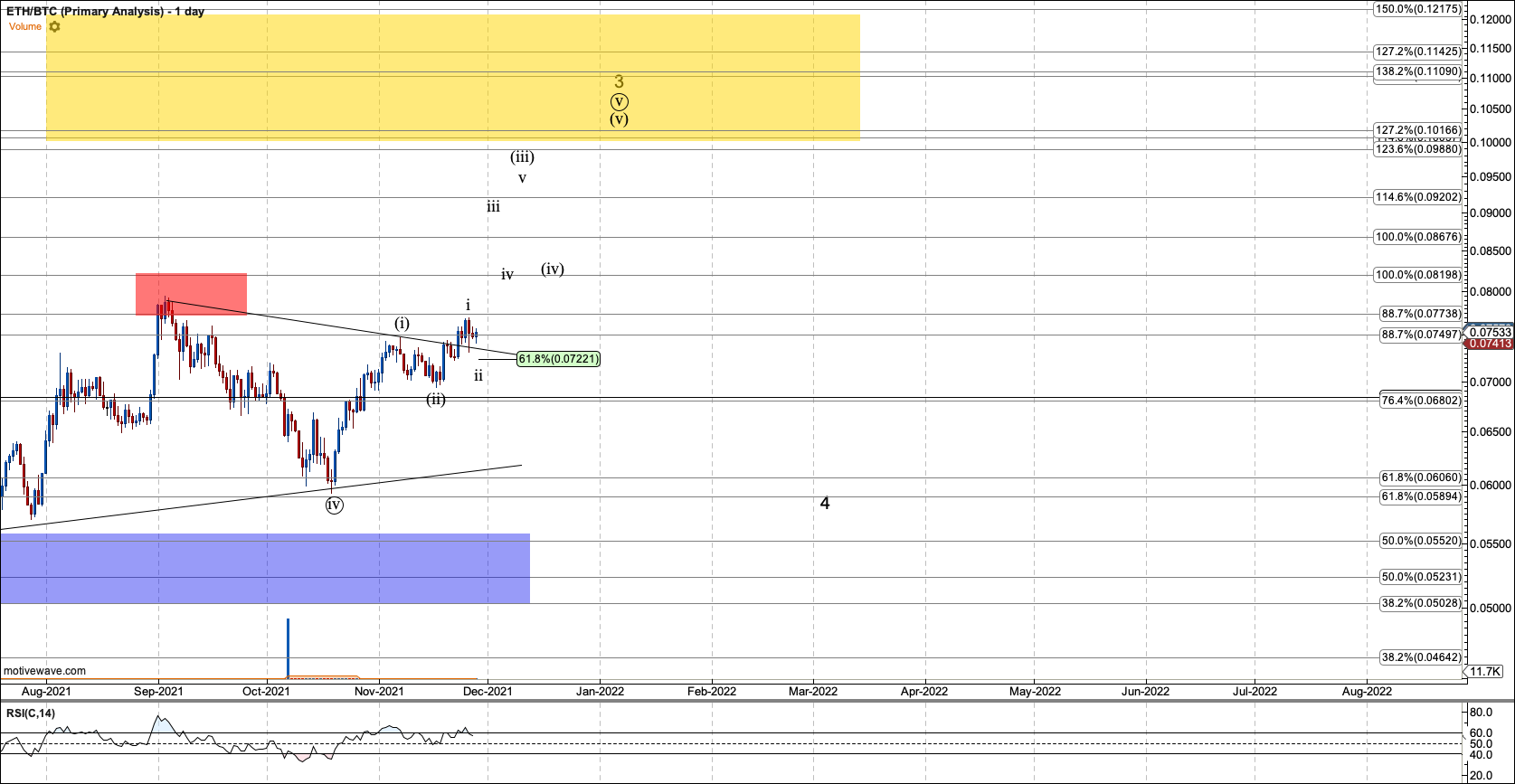 GBTC will be reviewed tomorrow. 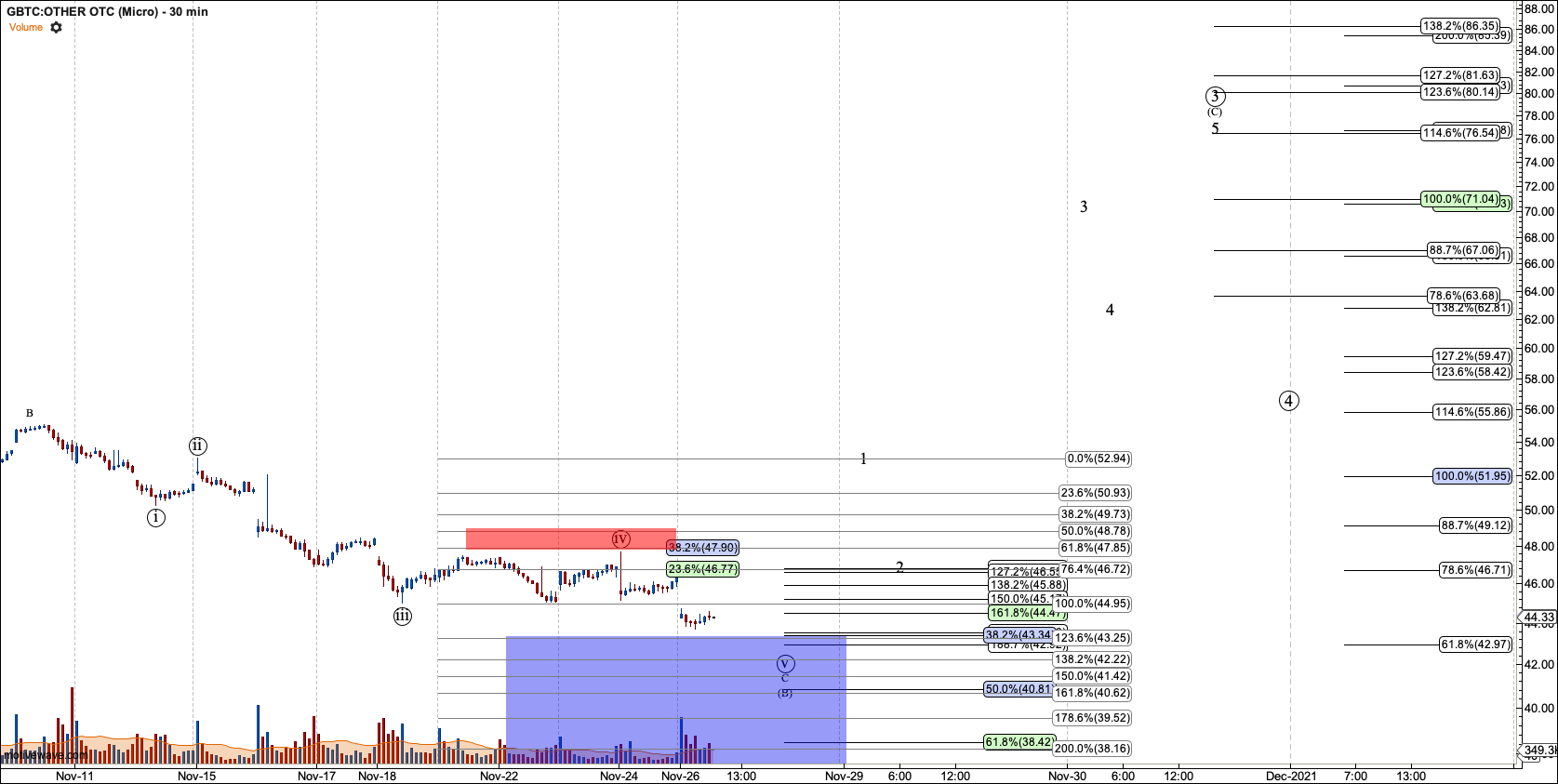 The current bull cycle, which began with the ~$3000 bottom in December 2018, is not expected to end until Bitcoin fills out five waves off that low. Currently, five waves are expected to complete between $125K and $150K though it can extend further. Note I stated on the October 17th webinar that Bitcoin may push closer to the $200K region in 2022. But this potential needs to be studied after a top in the third.

The top at $64,900 in March of 2021, marked the end of the third of the third wave (Circle-iii of 3). This means the longest and fastest wave in this bull cycle is complete. We are in the ‘fours and fives’ of the cycle, which is expected and has been more choppy than the move from October 2020 to March 2021.

I count Bitcoin already progressing in circle-V of 3, as long as Bitcoin remains over $29K. And this wave is expected to top between $88K and $114K where wave 4 will begin. Wave 4’s support will be discussed when we have a confirmed top in wave 3. However, right now, I can say it is likely to hold the $30K region. 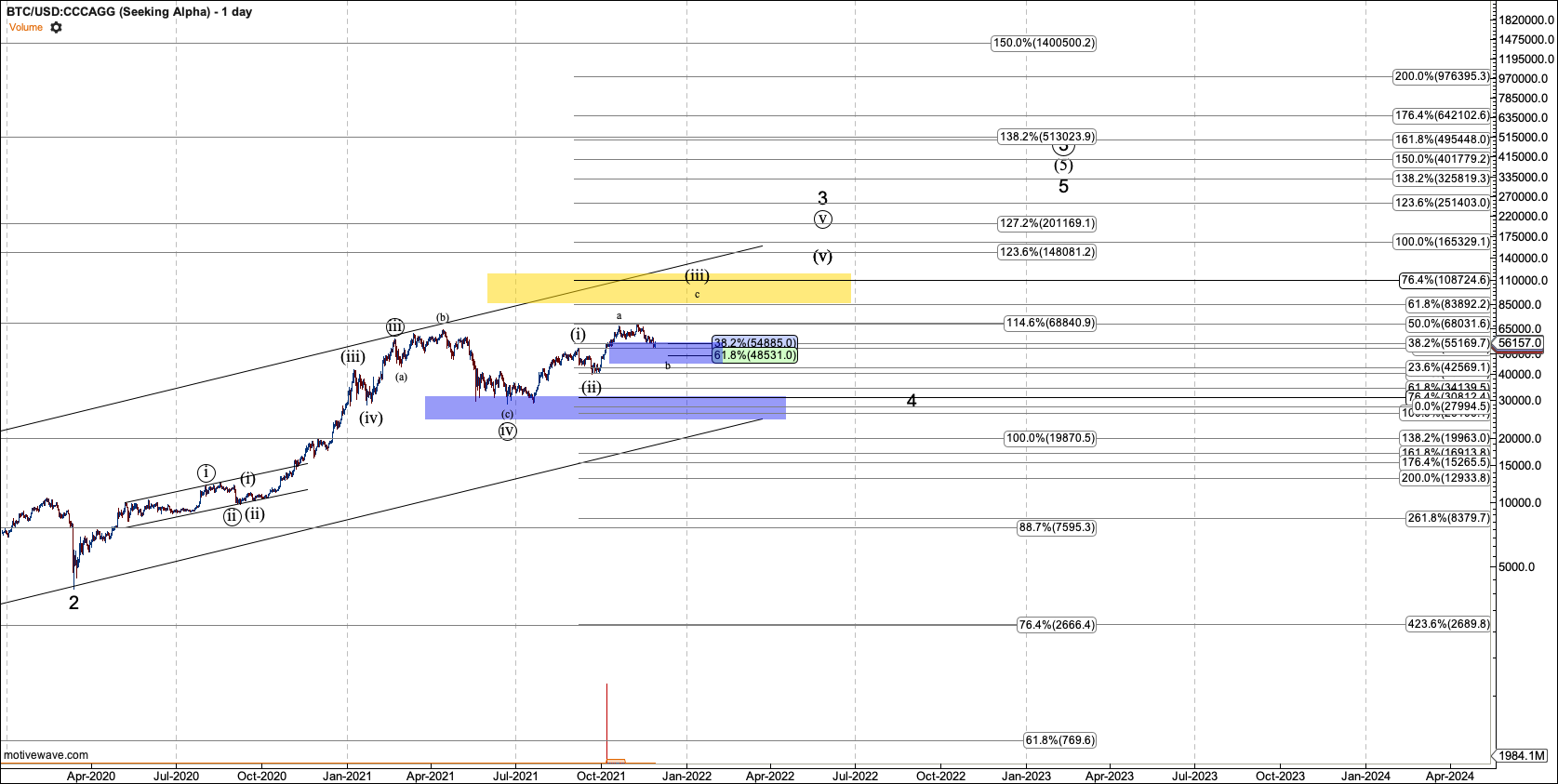 The orthodox view suggests that in June Ether bottom in iv of circle-iii. So, Ether would now be progressing upward in v of circle-iii. However, Ether extended into the May top, while Bitcoin was mired in the circle-iv of 3. That extension and subsequent drop suggest Ether may already be in wave-(4) and the current rally is the B-wave of that correction, rendered in red.

Whether still in wave(3) or a B wave, a top of the current wave higher is expected between $6 and 8K, most likely closer to the former, before a drop in circle-iv or red circle-c. That correction can easily reach the $1000 region.

After this current bull cycle completes, the coming bear cycle is slightly unclear with respect to support. However, I discuss two scenarios here. 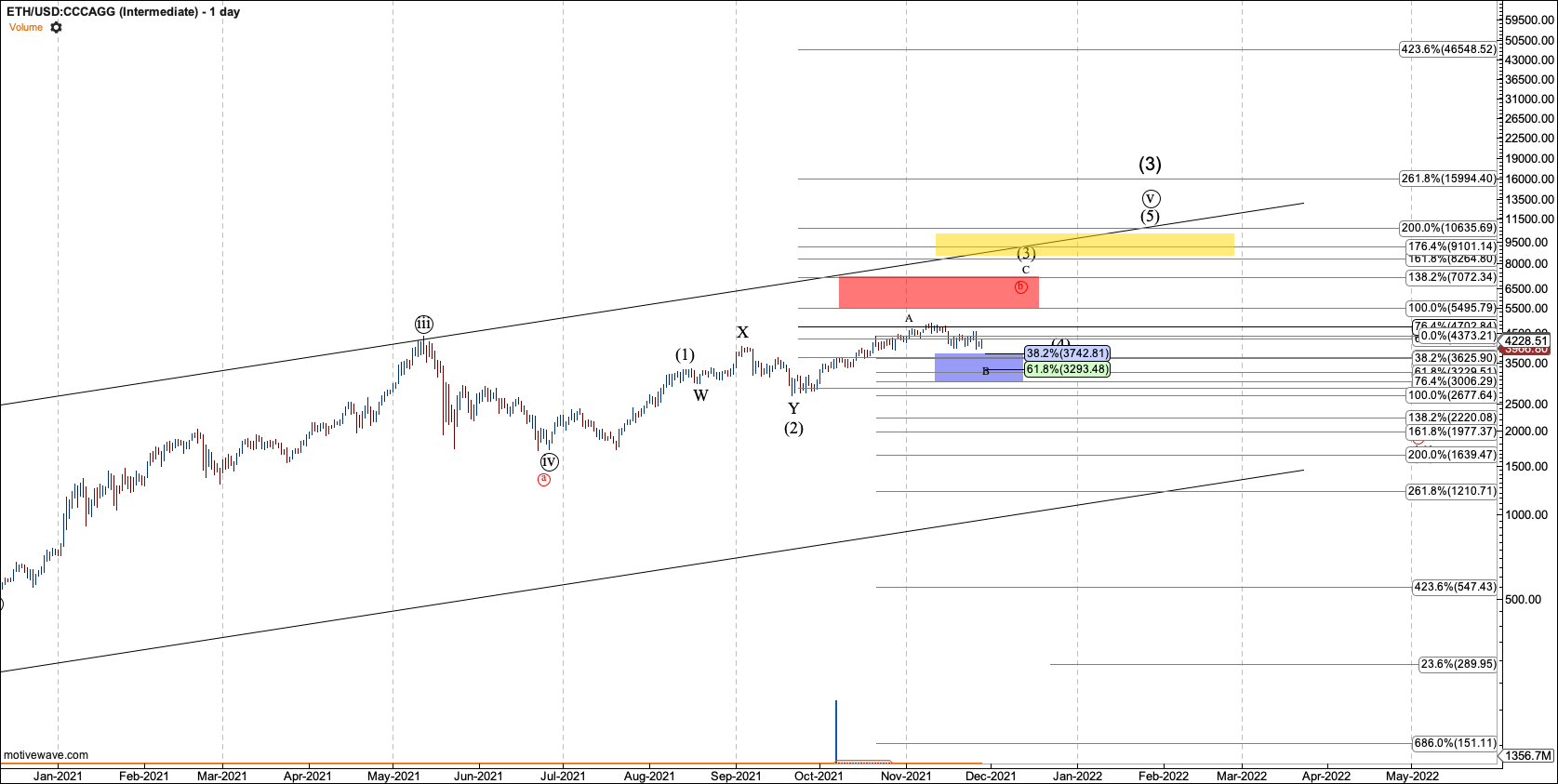 We should view GBTC’s structure in light of Bitcoin’s. Since the decline in premium to negative levels, GBTC’s targets have been very close to Bitcoin’s targets divided by $1000. Therefore, the current move higher which is counted as v of (III), should reach between $88 and $114, before correction in (iv), likely back to the $30 region.

Ultimately the bullish cycle in GBTC, which started a month later than Bitcoin with a low in January 2019, should reach between $125 and $150 before the next bearish cycle. However, because GBTC’s longer-term structure doesn’t line up with Bitcoin’s due to the lack of structure, I view support for that bear market only determinable by watching Bitcoin. 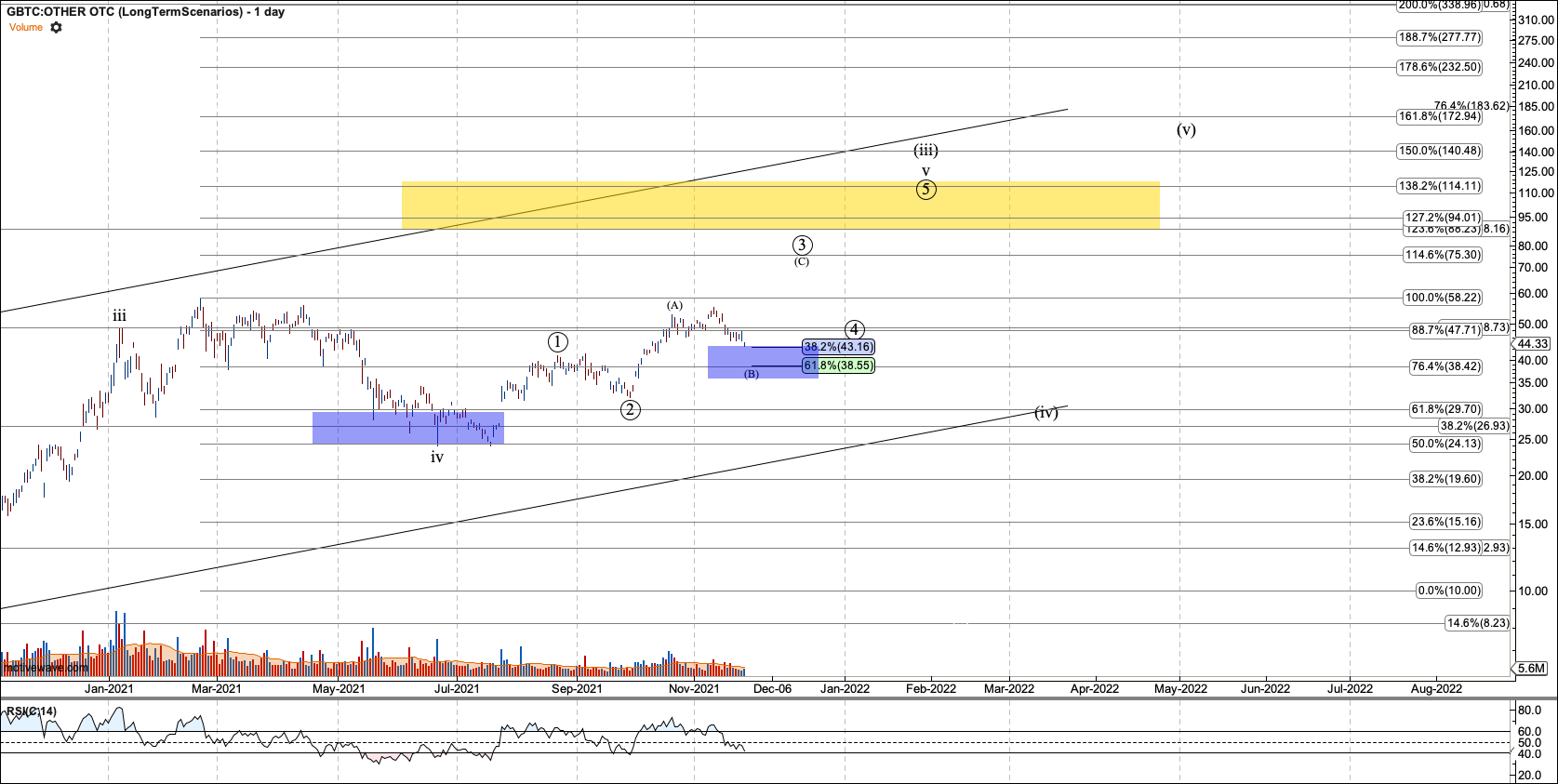