The second week of February played out as another upside trend week continuation pattern. In simplest terms, the price action bull flagged and eventually broke out above the first week’s high of 2737.75 on the S&P 500. Hence, the bull train is in the midst of its acceleration route towards the 2795-2800 continuation target.

The main takeaway from the week is that the bulls remain in full control in terms of momentum being sustained as the 2730 trending support was stick-saved and blasted off on Friday. The opposing bears remain endangered and irrelevant still, and only have a chance again if December highs hold/reject hard. Also, the bulls completed their quest for wrapping up the week at the highs again similar to what occurred during the past few weeks because it’s been an uptrend context.

Friday closed at 2777.75 at the highs as a straight follow through weekly candle signifying continued strength. As of writing, the market is bull flagging again on the key 1hr/4hr momentum charts heading towards the same 2795-2800 continuation target. This only remains valid for immediate trending purposes when price action remains above 2750.

Heading into this holiday week, we still remain bull biased when price action hovers above 2750 for immediate trending purposes based on momentum. We also have to aware of the December highs ahead at 2814 in terms of a surprise going into 2795-2800 target. This means that there’s a confluence of major resistances ahead here so aggressive chasing the bull train here will be tougher than prior weeks. The game plan is to stay flexible and nimble this week due to how close the current price action vs. major levels/confluence of resistances around the December highs. We also have to be open-minded if this bull train surprises us with a clean breakout above December highs of 2814 and forces an outside month breakout that signifies further highs are likely coming due to continued strength.

For the short-term bears, the absolute earliest indication of a trend reversal possibility would be a break of 2750 in order to have a chance to do a range expansion to the downside (levels such as 2730/2700/2680). Until this occurs, its déjà vu all over again… grind higher highs, bull flag/consolidate, breakout again. Please note: the low print of the past two days low is located at last week’s key trending support of 2730. Essentially, it’s pretty cut and dry on what bears need to do in order to launch the start of a bear reversal setup.

Clear and concise context for this month:

In simplest terms, we are aware that February will likely be another inside month based on the current odds. (surprise surprise) We’re going to capture the range and pocket the points because it’s a freaking huge range. The current odds indicate that bulls are unlikely to break above 2814 (December high) and bears unable to break below 2438 for February so let’s play it smart given the huge range and in an efficient manner by focusing the morning spikes and setups. 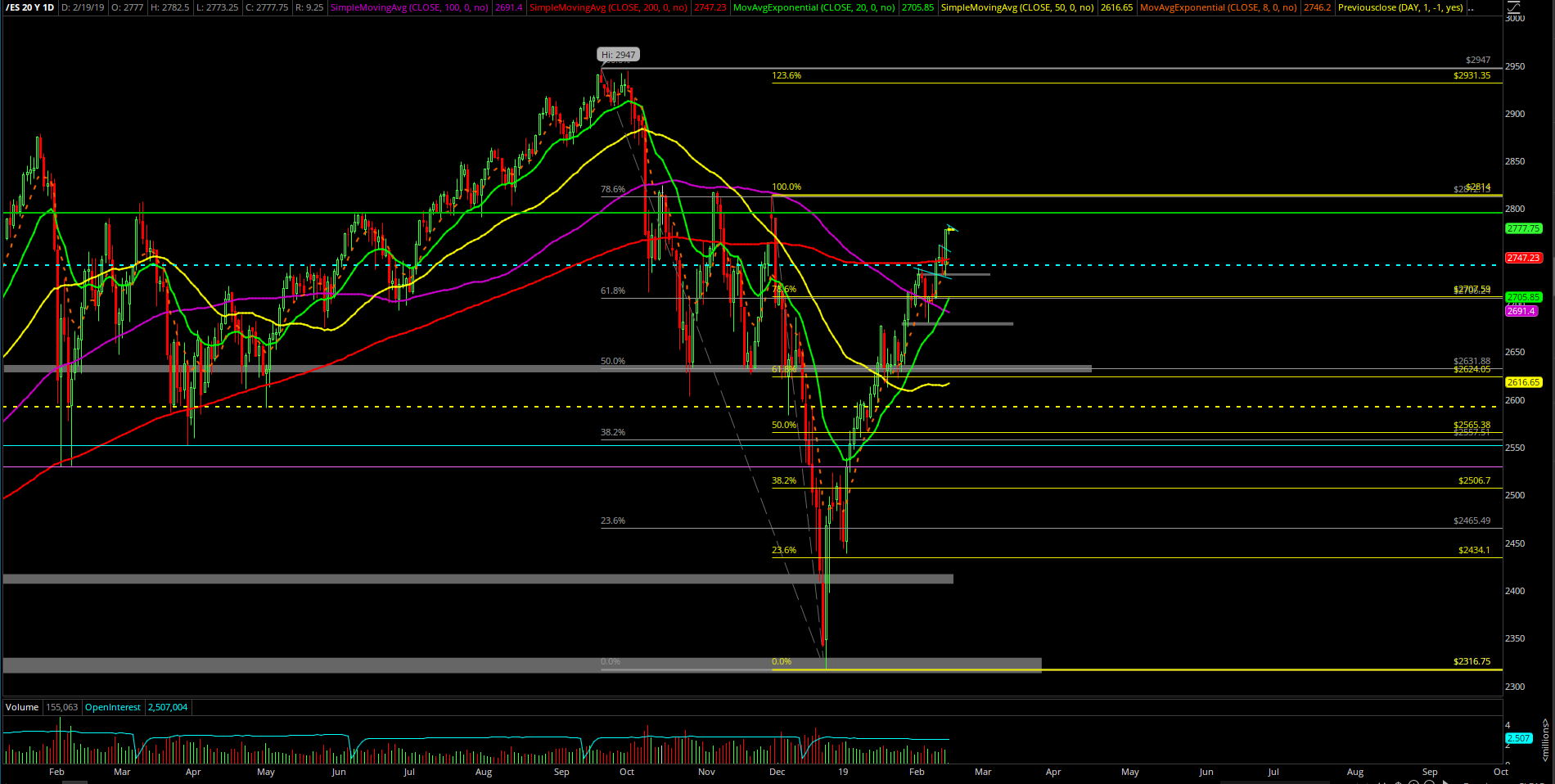 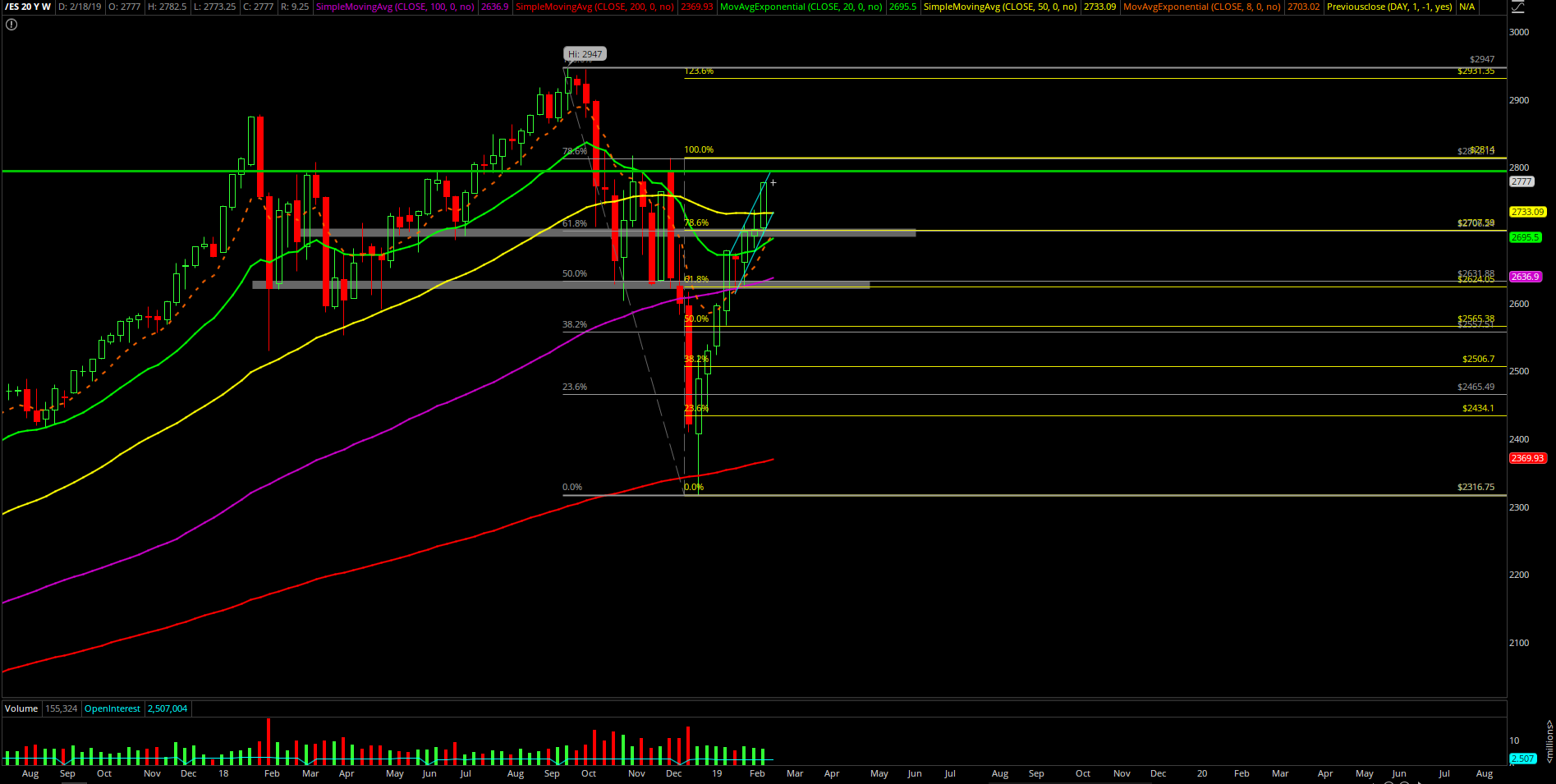 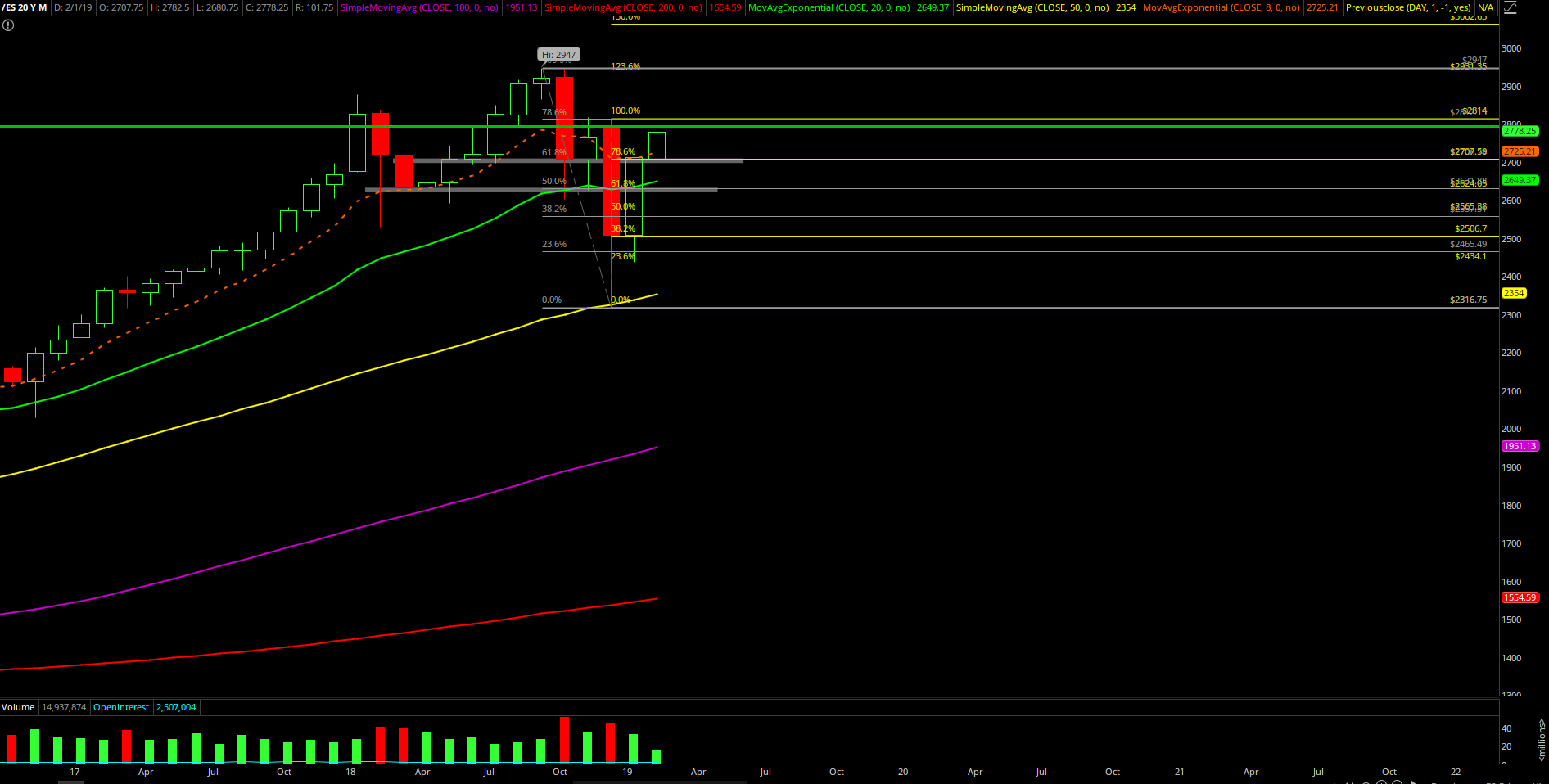 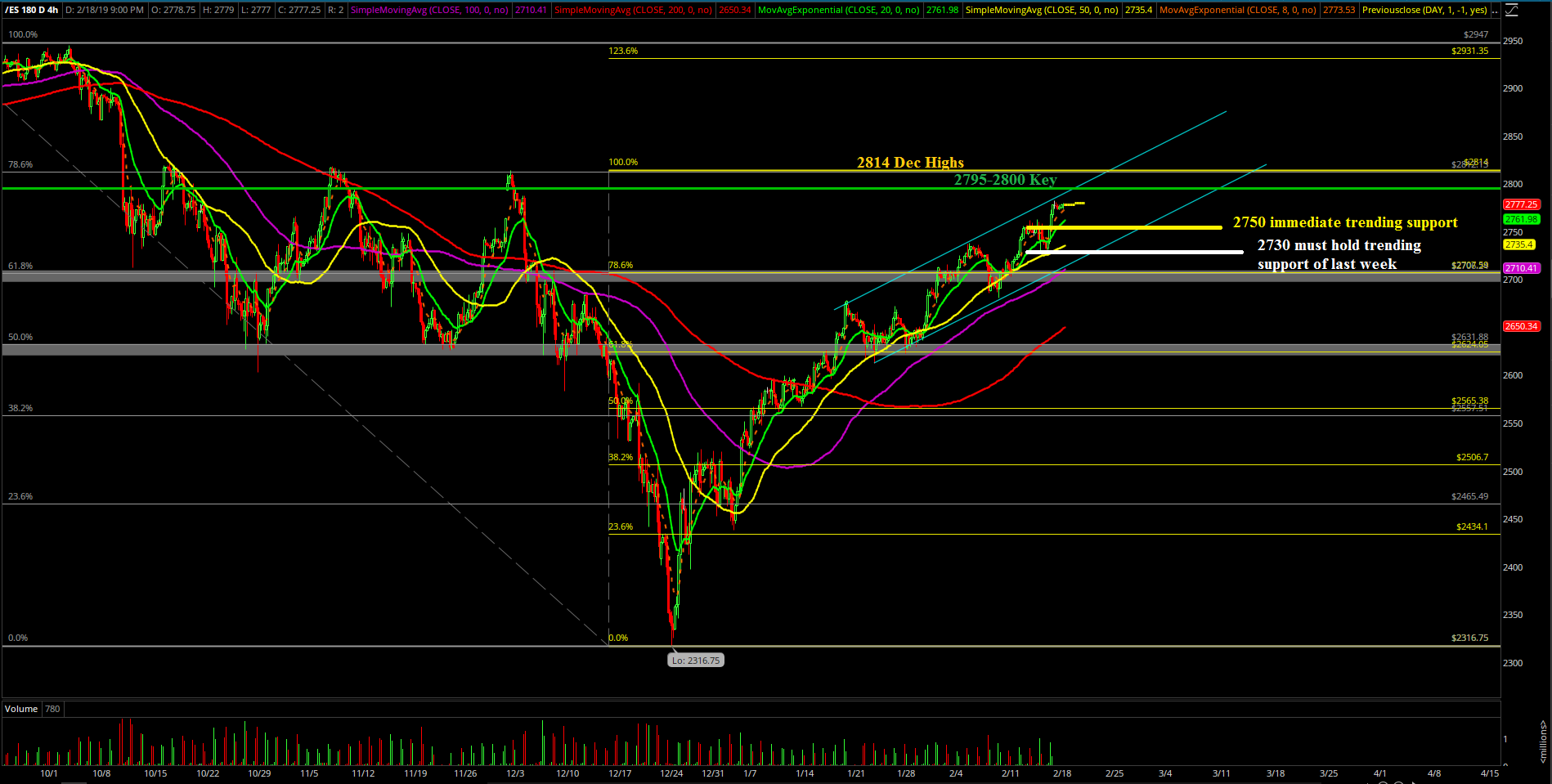 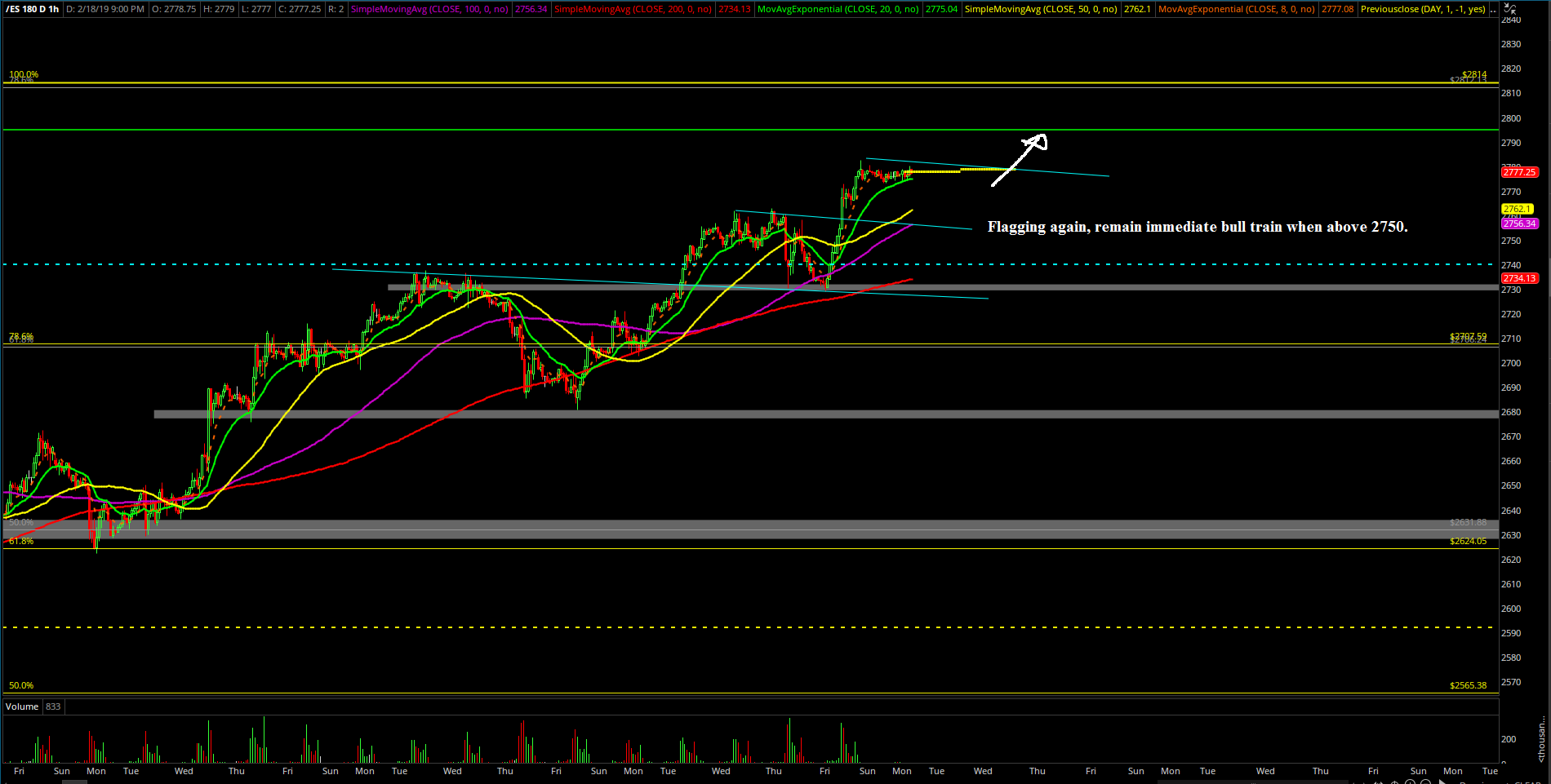 es feb18review5
Ricky Wen is an analyst at ElliottWaveTrader.net, where he writes a nightly market column and hosts the ES Trade Alerts premium subscription service.