Just like we did for the last debate, we can look at each of the top three candidates through a MoodCompass lens and see what we can see about how they might do in tonight’s debate (the process for doing this is similar to how internet trends are coded into social mood for the MarketMood algorithm)  The top themes found in recent social media posts for each candidate were coded in the eight MoodCompass categories and looked at individually, and relative to each other.

An unusual situation about tonight is that “we” are currently in an inversion where in most circumstances the source data input is the opposite of what comes out.  In other words, from the mood or attitude going in, the result is the opposite of what would normally be expected.  There is a method for dealing with this with markets and with expected news themes.  It is not currently known how this will show up in individuals competing together as the audience is also in this inverted condition.  This is the moment to find out!

Individually, we can look at each candidate’s MoodCompass.  Note: the four qualities not labeled are Stability – green, Energy – red, Strategy – yellow, and Instinct – blue.

Joe Biden’s MoodCompass (without considering the inversion) shows someone who is likable, talkative, and energetic.  This is not the tired, possibly older statesman of long ago from the last debate (this is seen from all qualities being about the same except for Controlled (NW) and Instinct (W) being low).  With the inversion taken into consideration, if it works with people the same as everything else, we would look at this as a high Controlled (NW) and high Instinct (W) MoodCompass.  In this case, we would see a Joe Biden who is not very talkative, his age is showing, and he might appear out of touch.  Yet paradoxically, it's possible that he could still be seen as wise and experienced. 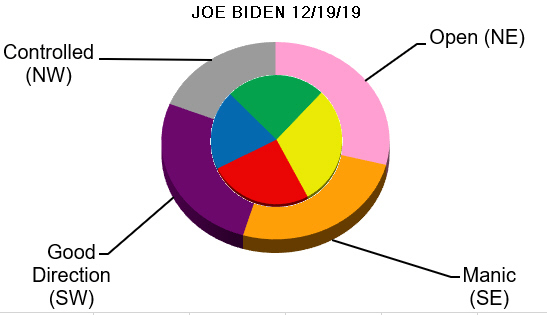 Bernie Sanders MoodCompass (without considering the inversion) shows someone who is extremely open and vulnerable.  A very nice and understanding fellow perhaps, but with no vision, and not someone you would trust to lead anything (this is from all qualities being about the same except for low Good Direction (SW), low Instinct (W) and low Energy (S).  With the inversion taken into consideration, we would expect to see a Bernie Sanders who knows where he wants to go and the direction he wants to lead this country in.  He may come across as lacking in understanding of other people’s perspectives, and could be less talkative than he usually is.  When he does talk he may step on toes, but don’t expect an apology. 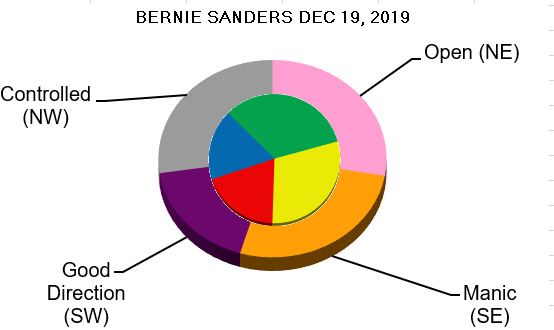 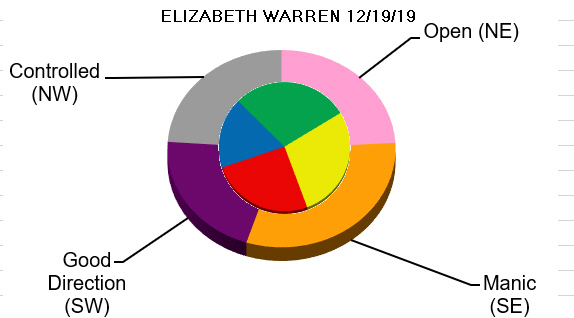 Here’s another view with the three of them relative to each other.  In the first chart below Biden stands out as high energy and Sanders the lowest energy when the inversion is not considered.  With the inversion, Sanders would have a definite lead here and might be seen as overly aggressive.

In conclusion, this appears to be a critical night for Joe Biden more than the other two.  If inversions play out with individuals the same way they do with news themes and markets, then Biden will come across as markedly older, low energy, and out of touch.  Yet, paradoxically he could still retain the perception of wise and experienced.  If the inversion is not apparent, because they, we, and our perceptions are all in the inversion together, then this will be a stunningly good debate night for Joe Biden.  He will be energetic, likable, and be perceived as the most reliable and trustworthy of the three top candidates.  Looking at Sanders vs. Warren, there's a good chance she moves up a bit and/or Sanders loses some ground.  Without the inversion considered, Sanders would appear to have low energy and looking old, with the inversion he has a direction, but would be more pushy than convincing that he has everyone's interest in mind.