Just for fun, let’s look at each of the top four candidates through a MoodCompass lens and see what we can see about how they might do in tonight’s debate (the process for doing this is similar to how internet trends are coded into social mood for the MarketMood algorithm)  The top themes found in recent social media posts for each candidate were coded in the eight MoodCompass categories and looked at individually, and relative to each other.

Individually, we can first look at each candidate’s MoodCompass, then we can look at all candidates together.  Note: the four qualities not labeled are Stability – green, Energy – red, Strategy – yellow, and Instinct – blue.

Joe Biden’s MoodCompass shows someone who is seen as more experienced, and perhaps more reserved or possibly secretive (this is from the combination of Stability (N) and Controlled (NW)).  His primary liability would be being seen as someone who won’t get things done (Energy (S) is his low point). 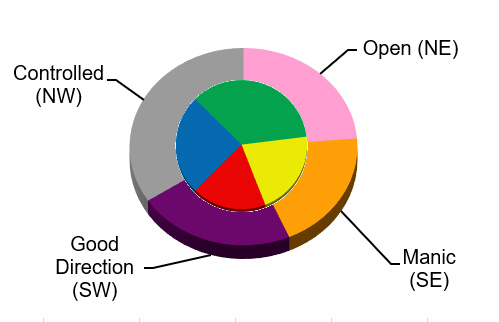 Pete Buttigieg’s MoodCompass shows someone who comes from his heart more than his head (Instinct (W) greater than Strategy (E)), yet he is trustworthy (high Open (NE) and Good Direction (SW)), and overall will steer us in what he believes is a good direction (high Good Direction (SW).  His weakness might be quick comebacks or snappy answers (low Manic (SE). 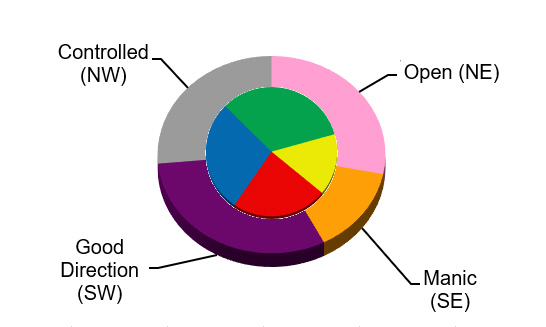 Bernie Sanders MoodCompass shows someone who is extremely talkative (High Strategy (E)) and should have a lot to say.  He will have snappy answers and may come across as brash or harsh (High Manic (SE).  If anyone steps out of line or shows a weakness, he will pounce on it.  His vulnerability is his age, but he should go out of his way to divert attention from it (low Controlled (NW). 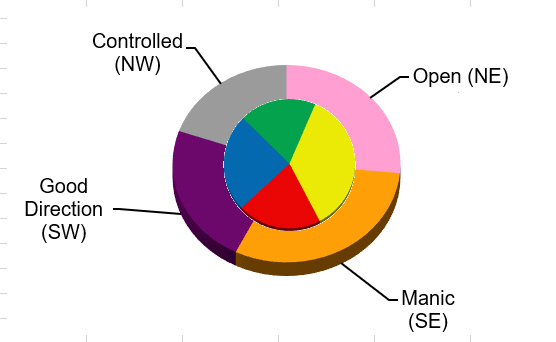 Elizabeth Warren: As with Bernie, she has a lot to say (High Strategy (E)).  She also should have snappy answers (high Manic (SE)), but may come across as less harsh than Bernie (elevated Open (NE)).  What will most get in her way is a lack of believable right course of action (low Good Direction (SW). 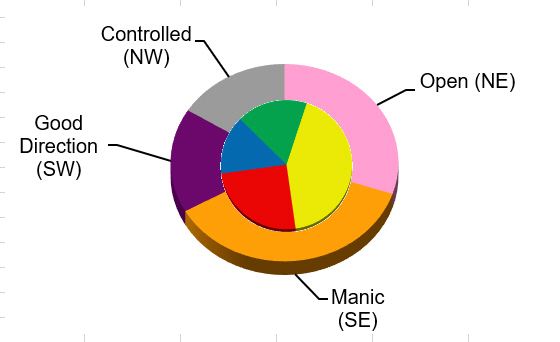 Here’s another view with the four of them relative to each other.  In the first chart below Biden and Buttigieg are near equal in Solidity (think stability as in both reliability and things staying the same).  Warren has the highest energy of the four, but Buttigieg is surprisingly right up there.  Warren leads with the plans and strategies with Sanders close behind.  Buttigieg’s getting direction from his heart or perhaps his faith shows, and even more pronounced, Warren’s lack of gut instinct fits with someone who may be too much in their head.  Buttigieg's combo of very high Stability and very low Strategy is a bit concerning as it implies that he might be seen as too quiet or at least not talkative enough.

In the final chart, we see Biden as the least Open and most Controlled.  Sanders and Warren are seen as the most disruptive (the high Manic and low Controlled) either in the debate or to the status quo (or both).  I would bet on Buttigieg having a good night as long as he can speak up and get words in.