I wish I had some huge insight to offer this evening.  But, the simple fact is that the metals got turned down at resistance again (which was provided this past weekend) after a 3 wave move off the recent lows.  And, with today’s decline, any immediate bullish pattern to take hold is not something I would consider a high probability.  But, it is something I have still placed on your radar screen.

In using the GLD as an example for the more immediate lower-probability bullish structure, as long as it holds over the 125 level, we can consider a 1-2, i-ii structure off the low, as presented on the attached 8-minute chart.  But, I think the higher probabilities suggest that further downside is going to be seen, especially as long as we remain below the highs we struck this week.  It would clearly take a break out over the highs we made yesterday to even give strong consideration to the potential 1-2, i-ii structure off the recent lows.

So, if I am not being clear enough, it means pressure will remain down as long as we remain below yesterday’s highs.  This means that GDX is potentially targeting the low 20 region next, with GLD setting its sights on the 122 region next.  As far as silver, it is in such an overlapping structure, I am unable to identify a reasonably high probability downside target at this time.

As I noted earlier this week about the laggard stock ABX, it is now hitting a cluster of Fibonacci resistance levels, including the .382 retracement of this wave iii down in the 12 region, a=c off the low in the 12.10 region, with the uppermost resistance in the 12.30 region.   Clearly, in order to prove a more immediate bullish intent, we will need to see the ABX strongly break through this cluster of resistance and complete 5 waves up towards the 13 region.  Until such time, it still looks like it will drop one more time towards the 11 region, and potentially just below there.

In summary, the metals have been turned down from resistance again, and the current structure suggests that another drop is coming to levels below those recently struck, as long as we remain below this week’s high.  Yet, as long as the divergences on all the charts are maintained, this next drop should complete these downside patterns, and turn us back up strongly over the next few weeks. 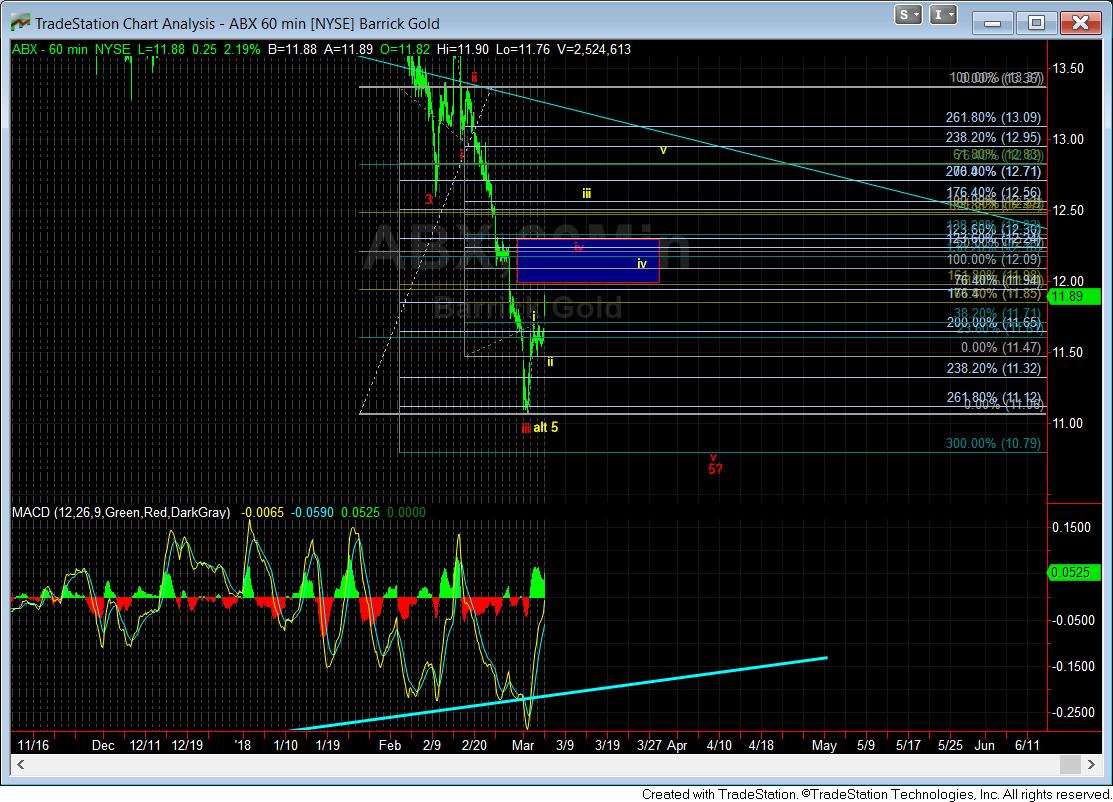