I am simply amazed at how bearish so many in the market are while GLD is sitting just below its break out point.  In fact, I am seeing more people giving up and selling their positions, just as gold sits just below its recent highs.  Can you imagine how extreme negative sentiment will be if we do fall back to the 121-122 region for a more protracted wave (ii)?

But, anecdotal evidence is not something that we trade or invest off of, nor should it ever be.  Rather, we are much more focused on patterns, along with supports and resistance.  And, since the pattern off the 2015 lows is a strong 5 wave structure, it means I have to give the bulls the benefit of the doubt when a bullish set up appears which can break us out.

Of late, we have developed another set up in GLD to break out, but, thus far, we have not sealed the deal.  For those that have been involved in this last year in the metals market, we have seen a number of break out set ups fizzle.  But, the other reason I will give primacy to the bullish thesis (beyond the 5 waves off the 2015 lows) is that once a break out occurs, you cannot get it to come back.  And, in the metals, when it takes off, it usually does so in a violent manner.  So, if a set up develops, I will certainly be pointing it out and what will invalidate that set up.  You can always stop out and buy back lower, but you cannot get back a break out that occurs without you being on board.  And, when those break outs do occur, they almost never allow a gentleman’s entry, after the fact.

Currently, the GLD has another potential micro break out set up in place.  Support for that set up is 126, with the initial break out signal being a strong rally over 128.30.  However, if we break below 126, and follow through below 125.30, that will likely open the door to the more protracted c wave of wave (ii), pointing us back down towards the 121-122 region.

In silver, nothing has really changed my expectations.  We have two potential downside patterns we are tracking, but as long as we remain over support between 15.85-16.01, I have to maintain the current wave structure.

As far the miners are considered, well truly have a mixed bag of information, as we have noted so many times before. As far as the ABX is concerned, we are now hitting the upper bounces of the downtrend line on the daily MACD.  Clearly, this is going to offer some resistance, and as long we remain below it, it still leaves the door open to see a lower low in this 5th wave. When I review the 60-minute micro structure, I have to note that it really is not leaving a lot of strong clues.  The high we made this past week was on a 3 wave rally, which likely makes it a b-wave in what can be an expanded wave (ii) structure.  So, along those lines, I would say the micro structure is making it less likely that we can see that lower low.  But, from a smaller degree standpoint, I would say it is less than ideal for an impulsive structure off the recent lows.

When it comes to the GDX, I really have no solid impulsive upside micro structure upon which to rely, and as long as we remain below 22.50, the pressure remains to the downside, as we may still try to strike the 20 region to complete this pullback.  But, if we can see more upside pattern take us through the 22.50 region, the may be a leading diagonal off the recent lows that can develop.  But, since I am not a fan of trading leading diagonals, for now, I am going to remain quite cautious of the GDX product.

Ultimately, the GLD is now providing me the clearest structure and signal points.  So, it is upon that product that I will continue to focus, with my lines in the sand on the downside being the 126 level followed by 125.30.  Overhead we have the contend with the initial resistance at 128.30.  So, the lines have been drawn, and the market will make its decision in the next few days. 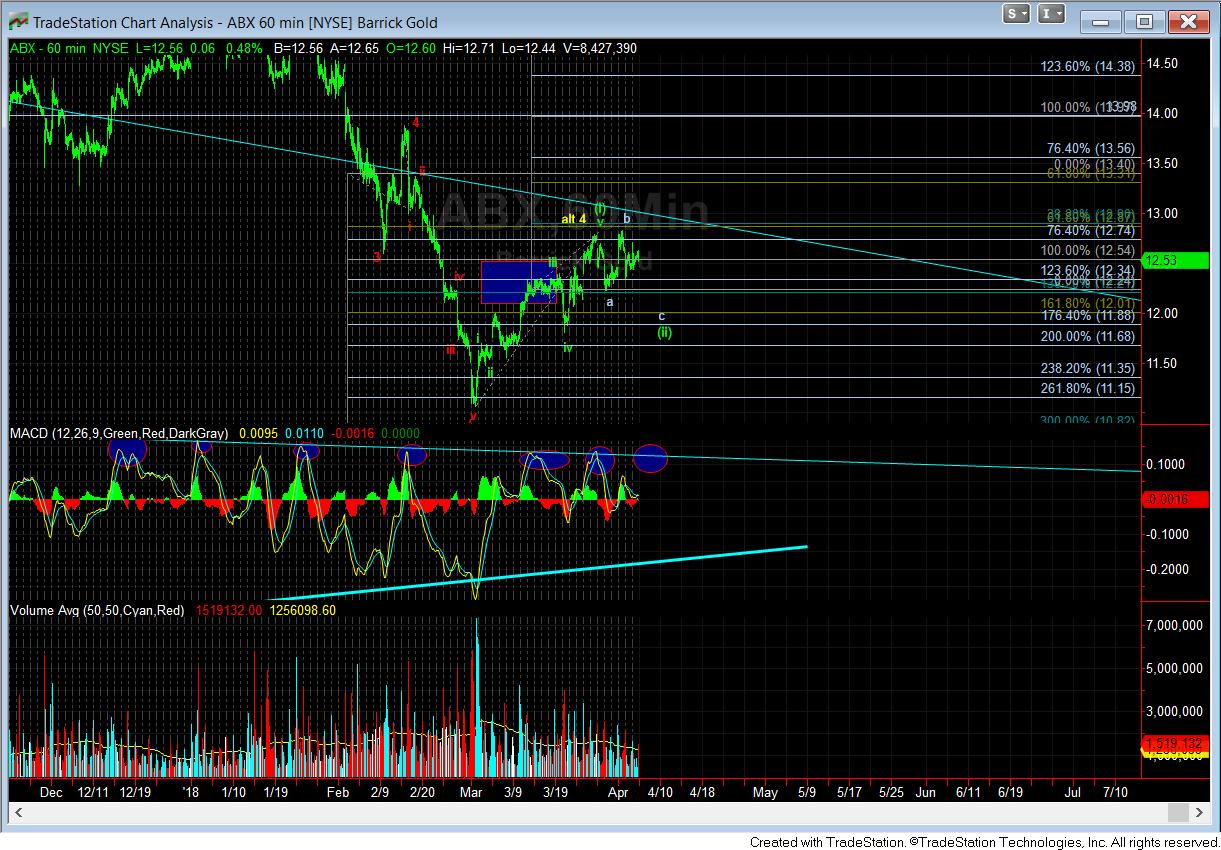