Friday's mood pattern showed the bulls slowing down and things were so slow today that the market might as well have been closed.  MMI was pointing down, but the relentless bulls managed to eke out a barely positive day.

It's difficult to get a good read on the weekend's mood pattern, other than it looks like it's still trying to turn bearish.  MMI is pointing down through Monday, MM MACD and MAM are signaling changes.  There is no market confirmation yet of a change of trend, but the warning bells are ringing.

New Trend Change Signals: There is a MM MACD swing sell signal for Monday open at or below 2975 SPX.  If the market gaps down it will automatically trigger.  There is also a MAM downward trend change signal for 9/6-16 (looking for a near term turning down sometime within that window).

Current Signal: There is a MAM downward trend change signal for 9/6-16 (looking for a near term turning down sometime within that window).  IF there is a sharp drop during that window (MAM < -10), that will generate a major low signal, the first one since last December.

The weekly forecast implies a correcting market.   Monthly charts show a market in need of at least a quick correction (which appears to still be in progress).  They also show a big trend change around October (base case is from down to up).

MM MACD signal is confirmed SELL and the intermediate trend is DOWN.  The swing trade is Sell at or below 2975 SPX.

The situation remains the same.  The long term trend indicator (LTTI) continues in bullish trend / topping mode.  The long term trend is indicated by the general divergence between the stock market and the mood generated forecast (see long term chart below).  The MM Long Term Trend Indicator (bottom chart) which is derived from this divergence, indicates: "Bullish Trend, Hold long long-term positions."  The MM LTTI has had this indication since 13 Feb 2019. 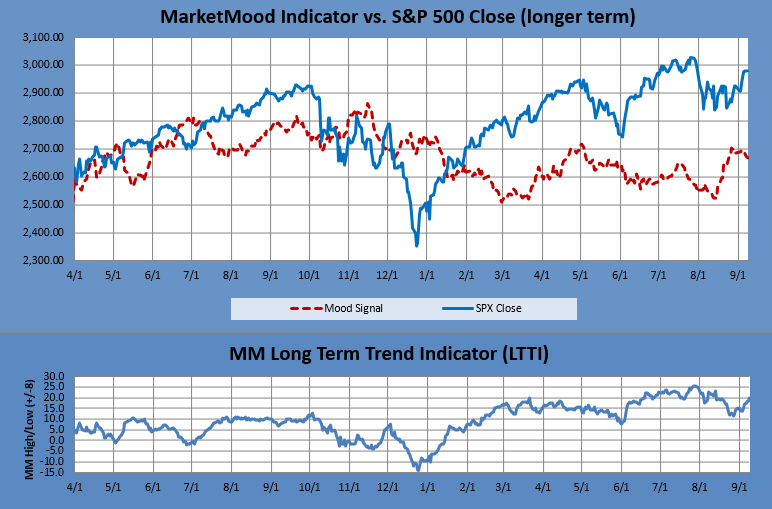