Today's mood pattern can imply a brief international crisis, so we can watch for something along those lines through tomorrow.  Perhaps the election in Hong Kong?  Covid-19 issues in Europe and Brazil?  That might be all there is on this.  MMI had no call today.  As was said yesterday, the market should be in a zone of support near here.  The Shorter Term S&P 500 chart shows 3800 SPX as a preferred area.  The Longer Term chart shows 3650 SPX as a price area it would still like the market to at least touch and bounce off of, but it might have to keep on wishing for now.  The market tried to break down today, then rallied strongly.

There is no daily MMI call through Monday open as the mood pattern continues to be ambiguous.  Although Saturday looks to be an important day related to government assistance (stimulus?).  MMI is down (below open) for Monday itself.

MM Trend Trader remains at sell.  MM MACD will remain on buy as long as the market stays above 3824 SPX.

The Moving Average Momentum (MAM): It's been quite a long time since there was a normal major high or low signal. the indicator's last major low signal was 24-31 Dec., 2018.  The market rallied strongly following the close on Dec. 24 which fulfilled the major low signal.  There was an ambiguous low signal from 20-27 Mar. 2020.  It was a combo major low and minor high in the same region.  The market did make a substantial low in that time-frame.  The last major high signal was 8-27 Jan. 2020 (possibly the longest window ever).  The closing high on 17 Jan. appeared to have fulfilled that, as the market dropped over 100 points following this window.  Yet, the market quickly recovered its losses and made a new high.  However, with that being the first major trend change signal in over a year, we needed to take seriously that it was pointing to something very different happening in both mood and market.  Soon after the market saw its largest losses ever.  There was an ambiguous combo minor low and major high signal for February 24 - March 3, 2021.  It is yet to be seen what significance it might have.

There are multiple possibilities for the month of March depending on whether a flip down occurs or not.  The base case is for the current decline to bottom and then for a continuation up to a high in March.  The alt case would be for a corrective low in March.  Regardless, April and May are likely to be big months in the opposite direction of March.  The weekly outlook shows a bearish lean in mood through at least the middle of March.   More details are available in the 13 Feb. -  5 Mar. Big Picture Update video. 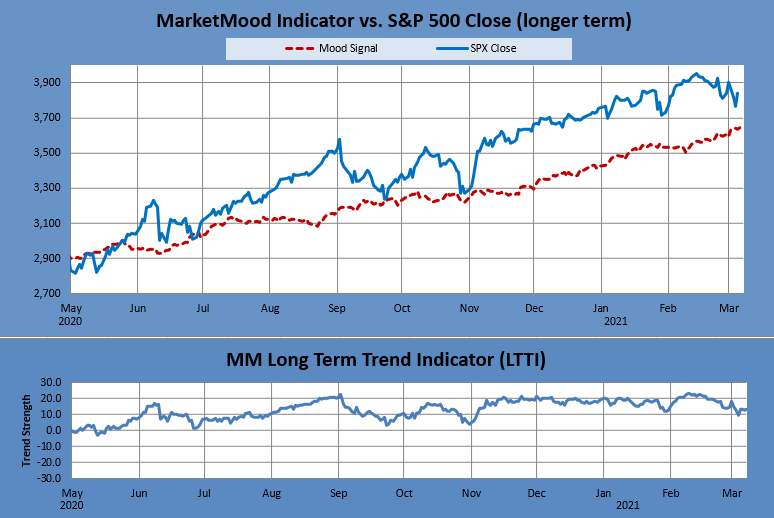