MMI was down today and the market closed sharply down although off the lows of the day.  CDMS is registered its second Strong Sell signal (strong odds of a daily negative close) since tracking began in September (the other one was on Tuesday).

The mood pattern for the weekend implies that there are some incorrect assumptions in play and even a blatant denial of the facts.  It's a guarantee that things are not as they currently appear and by Monday things could be markedly different.

MMI is mixed for the weekend, but net up for RTH open.  Pressure for a good bounce is beginning to build, however, MMI for Monday is down (below open) and CDMS (preliminary) is a strong sell for Monday.  It's important to know that the final call for Monday's CDMS is not set until after Monday RTH open, so it could potentially change on Monday morning.

As long as the higher probability signal stays on the sidelines, MM Trend Trader's main signal is currently bullish or bearish depending on which side of the bull/bear trendline the market closes on.  For now, it's bearish.  If RTH Monday opens > 4569, it will turn bullish, at least for the day.

The Moving Average Momentum (MAM): It's been quite a long time since there was a normal major high or low signal. The indicator's last major low signal was Dec. 24-31, 2018.  The market rallied strongly following the close on Dec. 24 which fulfilled the major low signal.  There was an ambiguous low signal from Mar. 20-27, 2020.  It was a combo major low and minor high in the same region.  The market did make a substantial low in that time-frame.  The last major high signal prior to March of this year was Jan. 8-27, 2020 (possibly the longest window ever).  The closing high in that window was 3330 on the 17th then again 3326 on the 23rd.  The S&P 500 dropped about 100 points from there through end of month, which was the largest drop in some time.  The market then rallied through February 19th to 3386, 60 points above the last high.  That was the actual high point, about 3 weeks past this 3 week window.  It most definitely was a major high point as it was followed by a steep drop of almost 1000 points before a closing low on March 23, 2020.  The most recent major high signal was March 10-17, 2021.  The closing high on March 17th was followed by a decline of less than two weeks which was highly unusual for a major high/low signal.

The intermediate market trend has turned down within a longer term bullish trend.  The remainder of the year, the market should continue in its topping process (if it hasn't already topped), getting ready for what could be a substantial pullback for early 2022.

MM MACD signal is NEUTRAL and the intermediate trend is DOWN. There is no swing trade signal. 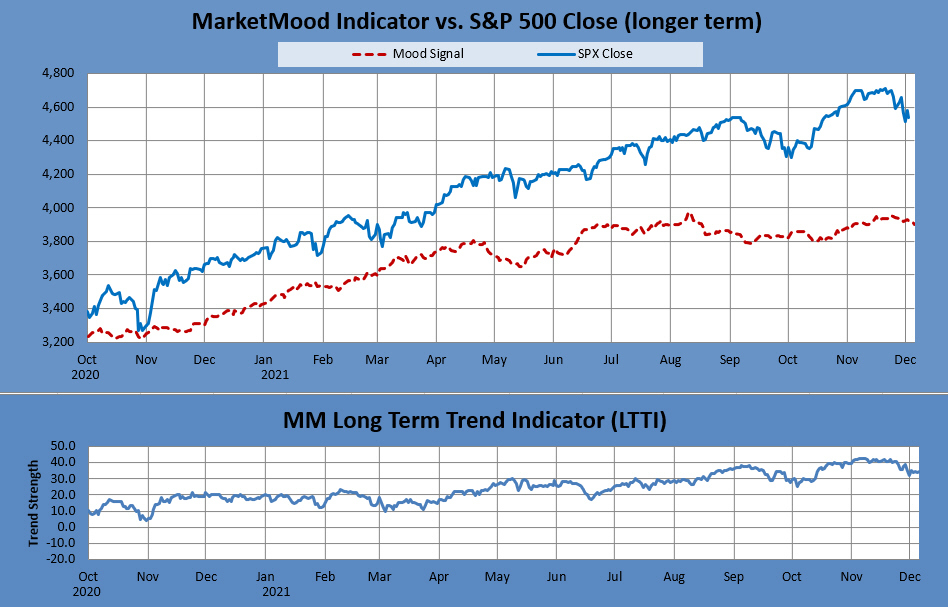