The mood pattern for Friday implied "a desire to move forward on an agenda, but with perhaps the annoyance or distractions of economic or domestic issues."  This fit well with the news of Trump's tariff plan with Mexico.  MMI was up, but the market could only make feeble attempts at bouncing.

Today's mood context was: "work, travel, 'out there''"

Things should come to a head over the weekend, and perhaps there'll be an attempt at a fix as the mood pattern implies global or geopolitical issues as well as a completion.  Monday, the mood pattern implies a serious attempt to calm things down.  MMI is down for both Monday open and Monday.  However, the market is extremely oversold and a good bounce could happen at any time (but that is not a recommendation to try falling knife catching).

The primary outlook is that a corrective downward move is in progress.  Weekly charts show a next (local) low the first week of June.  The weekly MM MACD issued an "exit long positions" signal the week of April 22.   Monthly charts show a next low in June or July.  A sharp rally is likely later in the year.

The long term trend indicator (LTTI) continues in bullish trend / topping mode, and is in the area (< 10, > 8) that shows at least a local top is in place.  The long term trend is indicated by the general divergence between the stock market and the mood generated forecast (see long term chart below).  The MM Long Term Trend Indicator (bottom chart) which is derived from this divergence, indicates: "Bullish Trend, Hold long long-term positions."  The MM LTTI has had this indication since 13 Feb 2019. 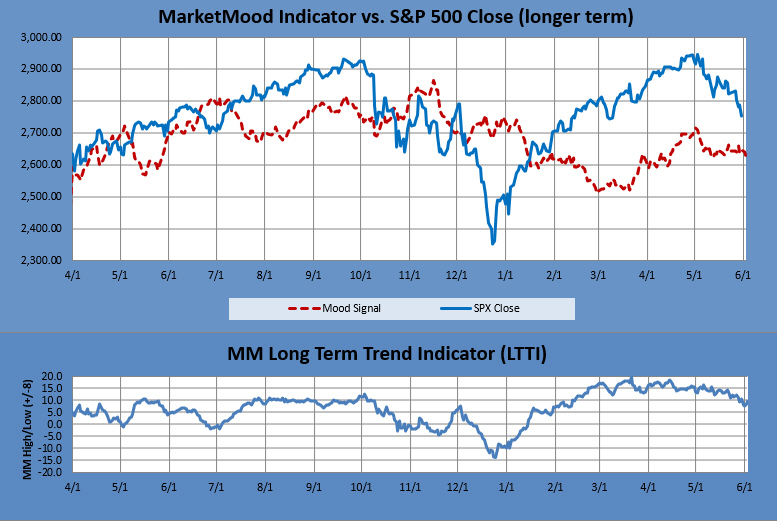