Today's mood pattern pointed to negatively perceived data, news, talk or tweets.  This usually accompanies negative market movement, however MMI calculated the day as up, so I made it a no call day.  The market was down most of the day, but nevertheless rallied near the end to close up for the day.

The mood pattern implies a focus on tolerance and getting along or at least moving in that direction.  We'll see if the intense emotions around the country can find some (momentary) resolution.  MMI is showing a mixed weekend with a net down move expected by Monday open.  Monday's MMI is down (below open), however MMI2 is looking up for Monday.  This gives a heads up to chop or whipsaw for Monday.

Weekend's trader mood challenge is: "not getting anywhere, hanging in there"

The weekly charts and momentum indicators show a local topping and pullback over the next two weeks.  Weekly trend indicators show a strong bullish trend above the 2600 SPX region and neutral below that.  Monthly charts point primarily up through August, yet quarterly charts show a drop into end of year.  Perhaps the reconciliation of this is the nearly flat sentiment showing in the weekly charts.  All together this projects a general trading environment of chop and /or whipsaw.  Trends may seem to be solid, then change at a moment's notice.

The long term trend is indicated by the general divergence between the stock market and the mood generated forecast (see long term chart below).  The MM Long Term Trend Indicator (bottom chart) which is derived from this divergence, indicates: "Bullish Trend, enter bullish long-term positions."  The MM LTTI has had this indication since 22 Apr 2020.  See further LTTI data below the chart. 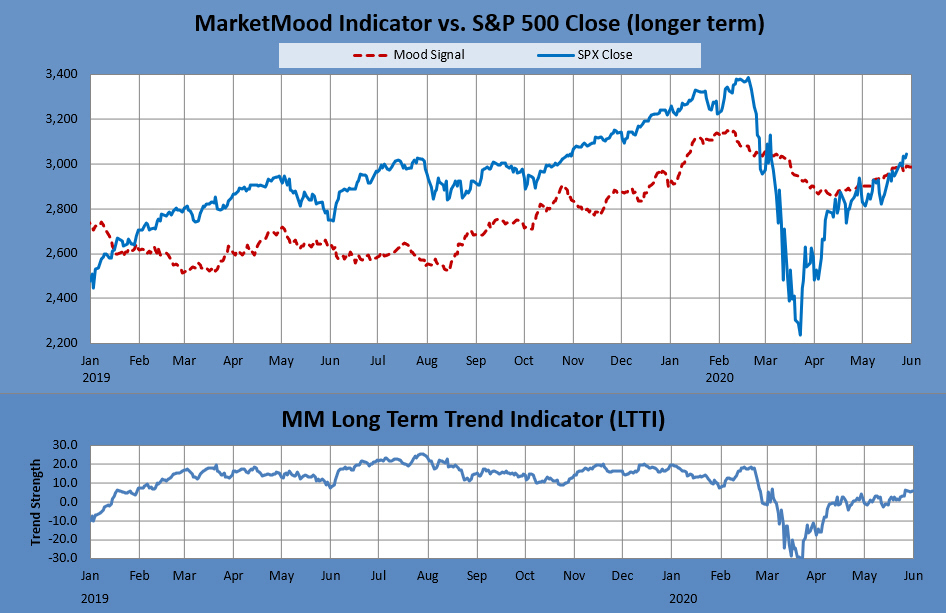 Conclusion: market tracking with sentiment on a day by day basis has been running below average so far this year.  Most recently, it's been tracking below the average for the current year's performance.