Today's mood pattern reflected "continuation" and we were looking for a clue from today's open to see how the market might want to continue.  Futures were trying to bounce just before Regular Trading Hours open, but since it wasn't a clear and obvious bounce we assumed a generic down RTH open.  With that, the Market Mood Indicator (MMI) was down (below open) for today, our daily trade signal or composite daily mood signal (CDMS) turned to strong sell and the MM MACD remained in swing sell mode.  The market closed strongly down.

People are feeling restless and tired of restrictions and shutdowns and the mood reflects a need for action.  There's an elevated risk over the next few days that a person or group may go to extreme measures to express their frustrations.  MMI is down for Wednesday, up for Thursday and down for Friday.  Pressure is building for a strong bounce, but bulls have not yet shown any resolve.

MM Trend Trader remains full on bearish.  MM MACD is getting close to giving up on its swing sell, but hasn't just yet and remains a swing sell below 4655 SPX cash.  A solid move back above the bull / bear trendline (4643 SPX tomorrow) should have bears take notice and reconsider their positions.  Until then, bears are in full control.

The longer term and intermediate trends are both bearish at this time.  The MAM major high signal implied a substantial pullback was imminent with the highest probability between Dec. 21-31 2021, and it appears to have begun on Jan. 4.

The long term trend is indicated by the general divergence between the stock market and the mood generated forecast (see long term chart below).  The MM Long Term Trend Indicator (bottom chart) which is derived from this divergence, indicates: "Bearish Trend, enter/hold short long-term positions."  The MM LTTI has had this indication since 18 Jan. 2022.  Previously, it was "Early Bearish Trend" from 5 Jan. 2022. 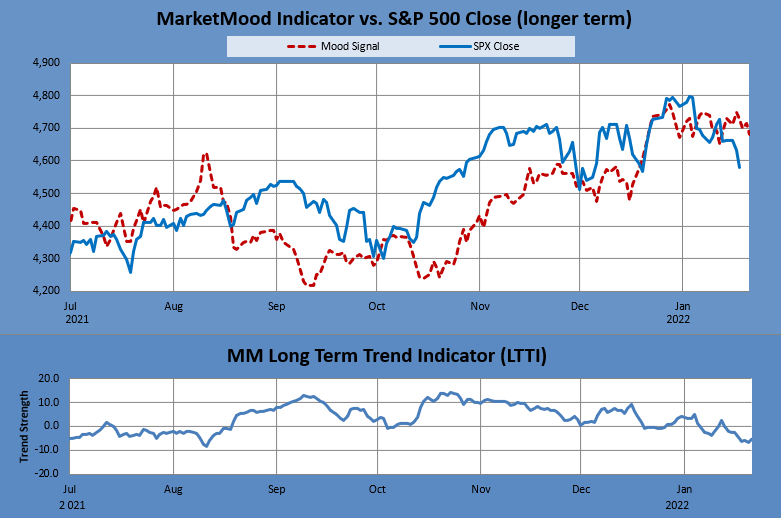