There was no MMI daily call for today.  The market closed only slightly down, well off the lows of the day.

Next week (week of July 12) could be pretty intense, but this week is quite ambiguous as far as daily MMI signals.  Wednesday is showing as a flip from down to up, and may look a lot like a roller coaster ride.  There is no call for Thursday or Friday

The long and medium term trend indicators remain bullish, although currently by only a hair.  It would take a solid break below the bull / bear trend line to signal that even a temporary pullback has begun.

Sharp Drop Advisory: The chart is showing suspiciously flat+overbought through Friday which would generate a sharp drop alert. However, with a local topping process as the weekly forecast, and a flip from down to up in the daily forecast for tomorrow, I would be careful about getting too excited about a selloff quite yet, especially while the market is above the bull/bear trend line.

The Moving Average Momentum (MAM): It's been quite a long time since there was a normal major high or low signal. the indicator's last major low signal was 24-31 Dec., 2018.  The market rallied strongly following the close on Dec. 24 which fulfilled the major low signal.  There was an ambiguous low signal from 20-27 Mar. 2020.  It was a combo major low and minor high in the same region.  The market did make a substantial low in that time-frame.  The last major high signal prior to March of this year was 8-27 Jan. 2020 (possibly the longest window ever).  The closing high in that window was 3330 on the 17th then again 3326 on the 23rd.  The S&P 500 dropped about 100 points from there through end of month, which was the largest drop in some time.  The market then rallied through February 19th to 3386, 60 points above the last high.  That was the actual high point, about 3 weeks past this 3 week window.  It most definitely was a major high point as it was followed by a steep drop of almost 1000 points before a closing low on March 23, 2020.  The most recent major high signal was 10-17 March.  The closing high on March 17th was followed by a decline of less than two weeks which was highly unusual for a major high/low signal.

There is a new Big Picture Update video available: July and Beyond.  The market should be shooting for a local high this week followed by a pullback on some level.  Overall the larger trend is bullish and the market is assumed to be striving for a breakout of the 4400 SPX resistance region.  The remainder of the year the market should be in a topping process getting ready for a good pullback in early 2022. 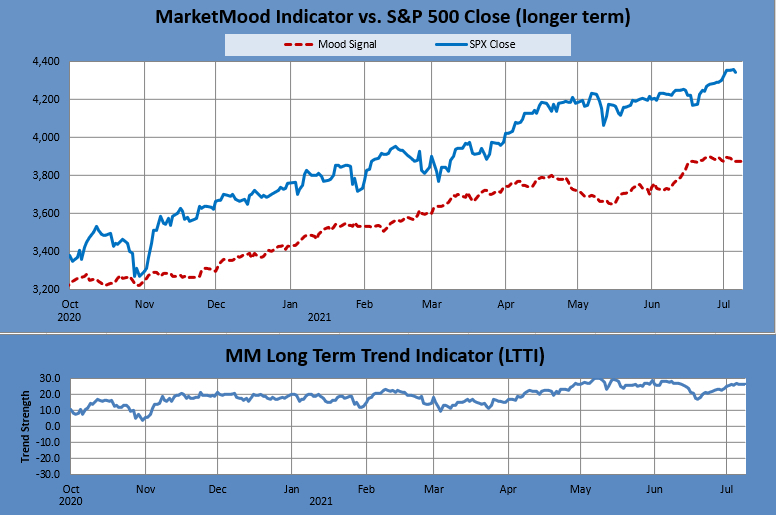 In normal mode, the top of the mood chart is primary, and in inverted mode the bottom of the chart is.  Inverted mode is currently assumed to be in effect.  A reversion to normal is expected sometime tomorrow.