Today's mood pattern of "bullish exhaustion" often takes place at local highs.  We seemed to have touched one today.  The pattern also implies that through Wednesday would be a good time to watch for potential international / geopolitical developments in the news cycle.  Europe's Covid-19 situation was deemed to be connected to today's market losses by the media.  Also of possible interest is the Israeli election results still to be determined.

Tomorrow's mood pattern implies "clarity" as well as a focus on news, data, or facts.  Perhaps questions will be answered and ambiguity will turn to clarity tomorrow in the markets as well.  Unfortunately, MMI has no call for tomorrow's market direction.   MMI is down for Thursday and Friday.    MM Trend Trader continues to be bullish or bearish depending which side of the near term bull/bear trend line the market finds itself.

There is a confirmed MAM major high signal in place.  The primary window for this high is March 10-March 17.  There is a slightly less probable secondary window for this high for March 17-24.  This signal results from both mood and market being sufficiently bullish that a major high is now considered imminent (or has recently already occurred). Remember, only the market can confirm that a lasting pullback has begun, and we'll only know for certain looking back from the rear-view mirror down the road. We will continue to watch what the market is telling us as our secondary window finishes up tomorrow.

There are two primary scenarios for April-May depending on how March finishes up.  The base case is for the current decline to bottom and then for a continuation up to a high in March.  The alt case would be for a failed rally down to a low in March.  The weekly outlook shows a stimulus induced bullish tilt for approximately March 17-22.  Other than that it's ambiguous in the near term.   More details are available in the March Big Picture Update video.

MM MACD signal is NEUTRAL and the intermediate trend is bullish > 3874.  There is no swing trade 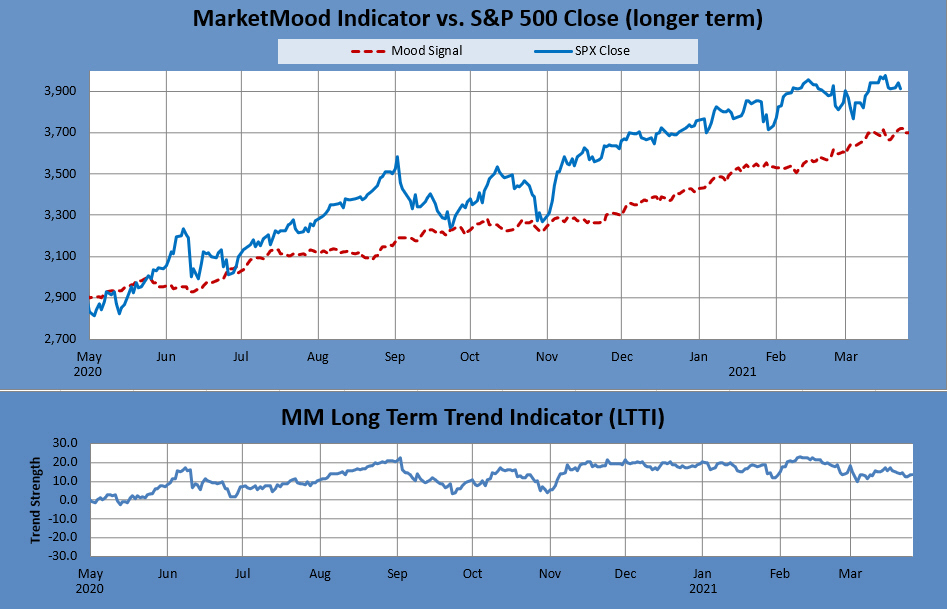