The long weekend's mood pattern is undefined, so there is no specific information for Tuesday open.  The sharp drop alert remains in effect on a weekly scale, and on a daily scale surrounding this long weekend.  The LTTI still reads "topping in progress."

Tuesday's mood pattern reflects confusion or uncertainty.  MMI for Tuesday is the same direction as the market opens relative to Friday's close.  A sharp drop alert remains in effect.  The LTTI still reads "topping in progress" with no sign of a change as of yet.

Sharp drop alert: Conditions are present in both the daily and weekly chart for sharp drop alerts.  The odds for this are heightened between Friday and Monday per the daily chart which is exceptionally flat during that period (see first chart below).

The primary outlook is that a corrective move is in progress.  Weekly charts imply a narrow window for a pullback (about a week or two) before market goes higher.   Monthly charts show the market to be primarily in a corrective mostly downward move through March then turning up.  A next low is anticipated February/March.

The long term forecast has returned to bullish from neutral and issued a "topping in progress" signal.  A stock market bottom was confirmed by the last long term low signal on 12/26/18.  The next time LTTI turns neutral it will issue a "top likely in place" signal.  Since a nearly two year bullish trend has recently completed, the trend may continue to vacillate between bearish, neutral and bullish for a bit before firmly deciding on the next solid long term trend (the hallmarks of a corrective wave pattern).  The long term trend is indicated by the general divergence between the stock market and the mood generated forecast (see long term chart below).  The MM Long Term Trend Indicator (bottom chart) which is derived from this divergence, indicates: Bullish Trend.  The MM LTTI has had this indication since 12 Feb., 2019. 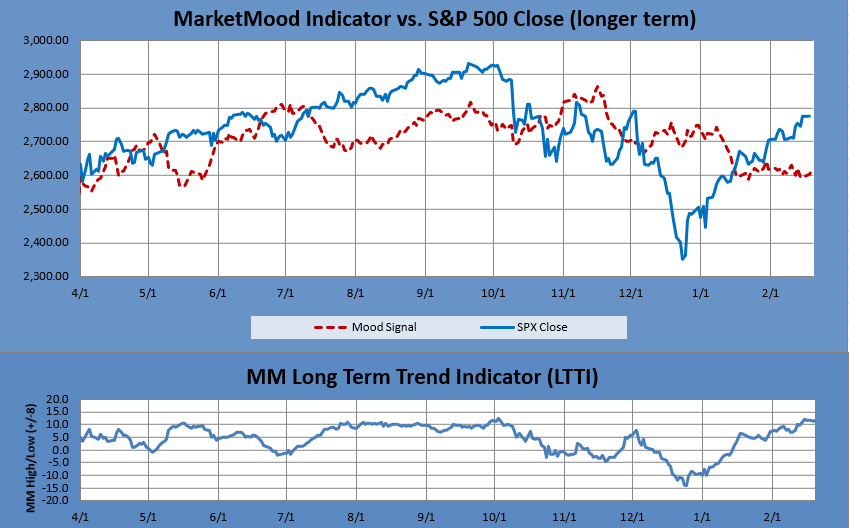