A multi-day mood pattern which began last Tuesday continued through the weekend trying to keep away an underlying gloomy mood.  As was said on Friday, "Unfortunately, a signal flip should kick in prior to Monday open with a shift towards aggression and a focus on geopolitics (it looks like that already happened).  "The market might not be happy with this" (Looks like it wasn't).  Markets gapped down at open.

Monday-Wednesday is a multi-day pattern which implies a new (mildly) bullish chapter.  Basically, a bullish EW subwave wants to start, but it might take a few days for it to kick in.  Until then, markets might be stuck searching for a low.  The S&P 500 closed nearly unchanged from open with more downside likely before bottoming.

Monday-Wednesday is a multi-day pattern which implies a new (mildly) bullish chapter.  Basically, a bullish EW subwave wants to start, but it might take a few days for it to kick in.  Until then, markets might be stuck searching for a low.

MMI for Tuesday-Wednesday: searching for a low

Reminder of this week's outlook: This week the mood pattern concludes a two week period of denial in the face of bearish news or facts, delusion, and general irrationality.  Facts are likely to be experienced as an intrusion and  annoyance in the face of a preference for denial and oblivion.  Unfortunately, this pattern is usually followed by an unpleasant "wake up call."  This is likely to occur no later than the first week of October.  Markets are likely to move primarily up or sideways until something pops the bubble, and jars it awake.  There is a "sharp drop alert" in effect-- an elevated risk of an unusually sharp market drop (which may also suddenly reverse) through October 5.

The primary outlook is that a corrective move is in progress.  Weekly charts are nearly flat over the next couple of weeks, then turning down.  They are also showing an elevated risk of a sharp drop through Oct. 5 (i.e. "sharp drop alert").  Monthly charts show (roughly) October as a low.

MM MACD signal is NEUTRAL and the intermediate trend is UP.  There is no swing trade signal. 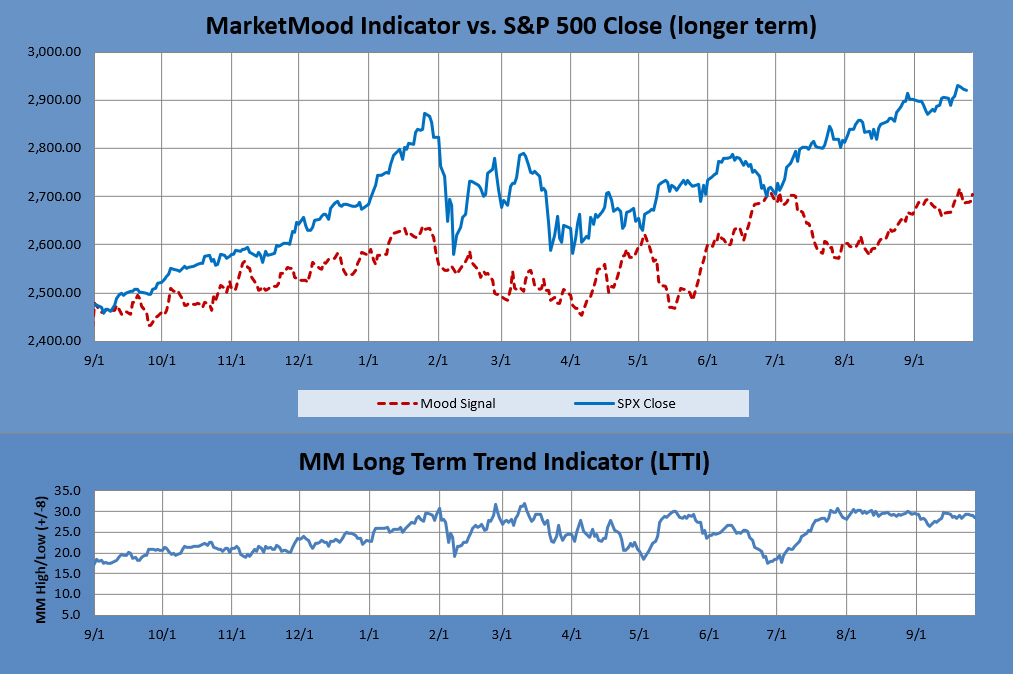