MMI was looking down for today (below open).  The market really tried to go down, but at the end of the day closed above the open.

The mood pattern for Tuesday reflects both strong emotions and letting go-- an odd mix.  However, with Michigan just now certifying the election results, it's not difficult to see how such a mix could play out.  MMI is leaning up for Tuesday, but it's too close for a call, and it's pointing down for Wednesday and Thursday.  MMI2 is looking for a local top near Tuesday.

MM Trend Trader continues on swing buy in both the main and higher probability signals.  A close Tuesday below 3572 SPX would signal a temporary pullback is back in play.

The Moving Average Momentum (MAM) Indicator's previous major low signal was 24-31 Dec., 2018.  The market rallied strongly following the close on Dec. 24 which fulfilled the major low signal.  There was an ambiguous low signal from 20-27 Mar. 2020.  It was a combo major low and minor high in the same region.  The market did make a substantial low in that time-frame.  The last major high signal was 8-27 Jan. 2020 (possibly the longest window ever).  The closing high on 17 Jan. appeared to have fulfilled that, as the market dropped over 100 points following this window.  Although there was a   Yet, the market quickly recovered its losses and made a new high.  However, with that being the first major trend change signal in over a year, we needed to take seriously that it was pointing to something very different happening in both mood and market.  Soon after the market saw its largest losses ever.

The big picture showed that if October was "serious" there would be an "optimistic new chapter" for November.  This doesn't mean there won't be pullbacks during the month, but an overall bullish outlook must be assumed unless proven otherwise.  On a weekly scale, the mood pattern points to aggression and potential geopolitical escalation over the coming week or two.  It is not clear how the market will respond to that. 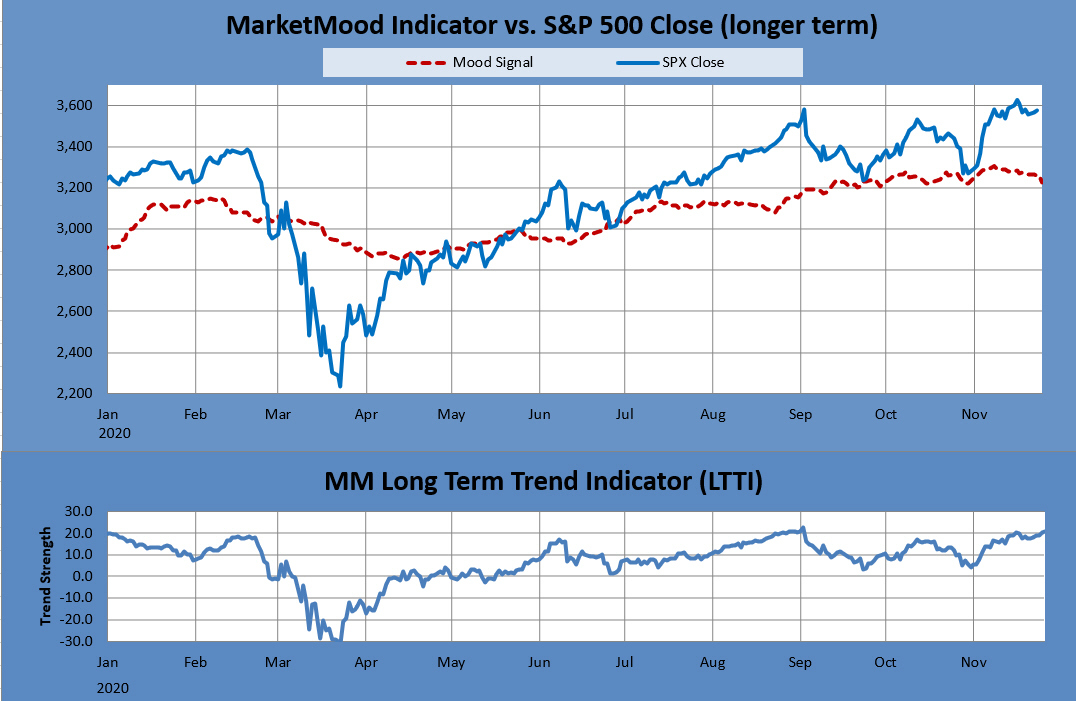 In normal mode, the top of the mood chart is primary, and in inverted mode the bottom of the chart is.  Inverted mode is currently in effect.