MMI was looking for a gap down at futures open on Sunday, then a turning up prior to RTH open.  We got that pattern, even though the market opened slightly down this morning.  Today we were watching for a possible flip from up to down which would be up first (got that), followed by a period of ambiguity then turning down.  The ambiguity was there, but no definitive turning down.  Because of the false positive signals for flips inherent in diagonals, I'm requiring a confirmation from the market before accepting that an inversion has occurred.

Tuesday is likely to complete the flip from up to down we were watching for on Monday.  Ideally, this would be up first, some ambiguity, then turning down prior to close.  Regardless, a near unchanged close on Tuesday or Wednesday will invalidate the flip going forward.  Thursday is a possible big move day, so it would be great if signal polarity and likely market direction can be settled before then.

For the next two days, without the flip the mood pattern is a mix of bullish market trend and "crisis / disaster."   With the flip, the mood pattern turns to a sense of "victimization."  Either way, the next day or two could be critical to the larger context.  For more info, see "For the Extremely Curious" section below.

MMI Tuesday: flip from up to down (alt case, just up)

The weekly price charts show what is still a highly overbought market in need of correction, and is pointing down through about 13 July.  Weekly trend indicators show a strong bullish trend.  Monthly charts point primarily up through August, yet quarterly charts show a drop into end of year.  Perhaps the reconciliation of this is the nearly flat sentiment showing in the weekly charts hovering around the 2600 SPX area.  All together this projects a general trading environment of chop and /or whipsaw.  Trends may seem to be solid, then change at a moment's notice.  Note: If the month of June closes nearly unchanged, then monthly charts will turn down for July-August.

MM MACD signal is confirmed SELL and the intermediate trend is DOWN.  The swing trade signal is SELL at or below 2998 SPX.  For the system trade, if the trade is triggered, the market must close below 2998 or trade is exited at close.

The long term trend is indicated by the general divergence between the stock market and the mood generated forecast (see long term chart below).  The MM Long Term Trend Indicator (bottom chart) which is derived from this divergence, indicates: "Neutral Trend, exit long-term positions."  The MM LTTI has had this indication since 11 Jun 2020.    See further LTTI data below the chart. 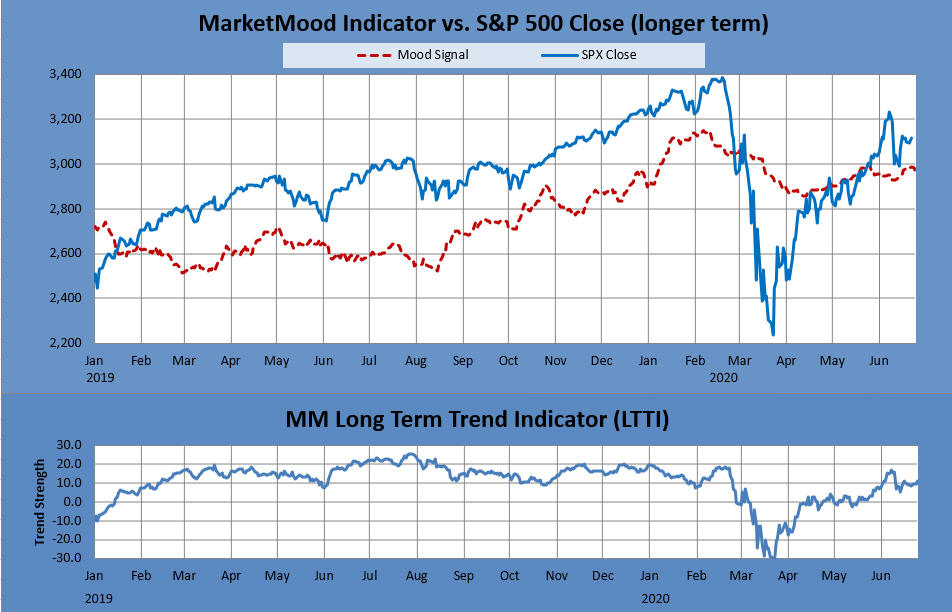 We've been watching for a good parallel move of the orange and grey lines (Manic and Controlled) to signal a flip.  That's in progress now, so we will continue watching for this on Tuesday.  What's very interesting about this moment is that without the flip, Manic and Controlled so close together with Controlled on top point to a crisis or disaster.  With the flip, the cluster of Vulnerable/Manic/Controlled point to a sense of vulnerability or victimization.  Neither one of those sound bullish.  Without the flip however, high Expansive / low Vulnerable imply a bullish trend.  With the flip, high Expansive can be pointing to international concerns.  Putting that together with the victimization could be pointing to feeling attacked from an international source.

Conclusion: market tracking with sentiment on a day by day basis has been running way below average so far this year.  Recently, it's been tracking above the average for the current year's performance.