Today's mood pattern implied "building tension" which was appropriate on a Fed day.  MMI was down today and the market was moderately down until... the FOMC announcement at which time it regained losses and closed higher for the day.  Today's close confirmed our major high signal.  Now we watch for the market to tell us we have made a top of some kind as our secondary window goes through the 24th.

Thursday's mood pattern tends to be bearish, although there may be a surprise thrown in the mix (in either direction) on Thursday / Friday. MMI is calculated as down for Thursday and is a flip from down to up day for Friday (ideally, down first, ambiguous, then turning up).

There is a confirmed MAM major high signal in place.  The primary window for this high is March 10-March 17.  There is a slightly less probable secondary window for this high for March 17-24.  This signal results from both mood and market being sufficiently bullish that a major high is now considered imminent. Currently, there has been no support broken and no confirmation that a high was actually made today.  Only the market can confirm that a pullback has begun.

There is a confirmed MAM major high signal in place.  The primary window for this high is March 10-March 17.  There is a slightly less probable secondary window for this high for March 17-24.  This signal results from both mood and market being sufficiently bullish that a major high is now considered imminent. Currently, there has been no support broken and no confirmation that a high has actually been made.  Only the market can confirm that a pullback has begun.

There are two primary scenarios for April-May depending on how March finishes up.  The base case is for the current decline to bottom and then for a continuation up to a high in March.  The alt case would be for a failed rally down to a low in March.  The weekly outlook shows a stimulus induced bullish tilt for approximately March 17-22.  Other than that it's ambiguous in the near term.

MM MACD signal is SELL and the intermediate trend is bullish > 3842.  There is no swing trade signal. 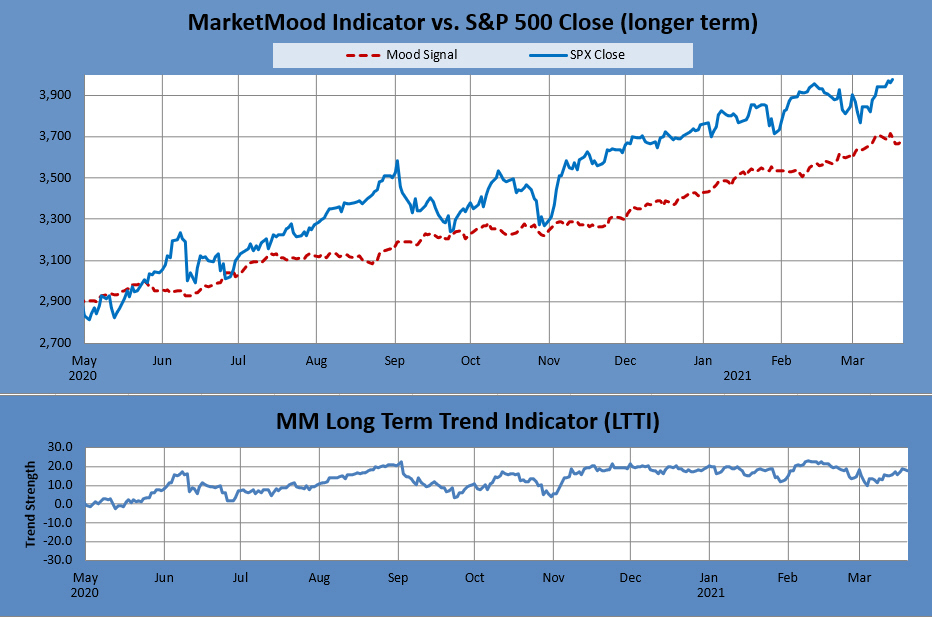