Today's mood pattern implied "opposite day" and the market gave us that, but not exactly in the way expected.  Yesterday the market opened up and turned down.  Today, the market started down, and turned up.  MMI was looking for an up close, but the upside at the end of the day was not enough to get there.  It was a feeble bounce attempt, at best.

Today's mood context was: "Clarity, plans, 'yes we can'"

MMI for Thursday: close down

The primary outlook is that a corrective downward move is in progress.  Weekly charts show a bounce the last week of May, followed by continued downside.  The weekly MM MACD issued an "exit long positions" signal the week of April 22.   Monthly charts show a next low in June or July.  A sharp rally is likely later in the year.

The long term trend indicator (LTTI) continues in bullish trend / topping mode, and is in the area (< 10, > 8) that shows at least a local top is in place.  The long term trend is indicated by the general divergence between the stock market and the mood generated forecast (see long term chart below).  The MM Long Term Trend Indicator (bottom chart) which is derived from this divergence, indicates: "Bullish Trend, Hold long long-term positions."  The MM LTTI has had this indication since 13 Feb 2019. 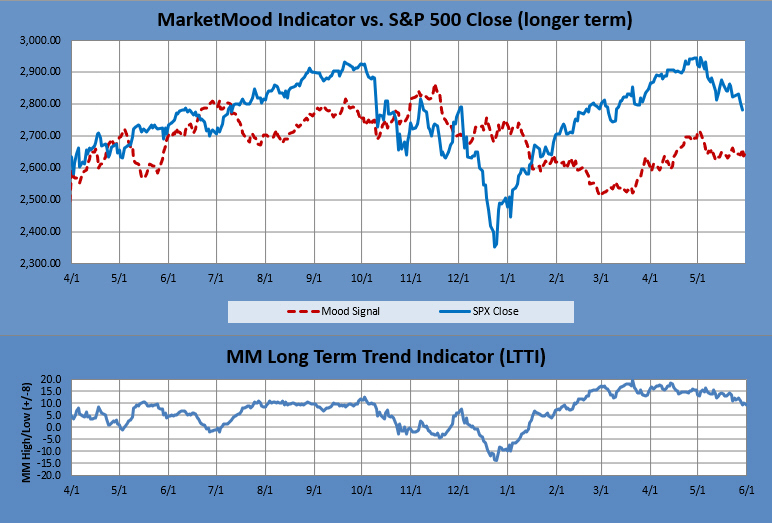