Today's mood pattern was complex and included a positive government related component.  The FOMC minutes and possibly the trade war news could be associated with that.  There was also an international or presidential negative component which could be continued shutdown uncertainty.  In other words, there was a lot of simultaneous ups and downs in sentiment.

Thursday's mood pattern (and Friday's) retains some of Wednesday's "bullish exhaustion" component.  This implies that bulls will continue to buy until nothing is left, making it difficult for bears to make any sustained moves until bulls actually run out of steam.  The primary mood component points to either international or presidential perceived negativity.  The preliminary outlook for the weekend (Monday open) is down, especially if Friday closes down.

The MM MACD has issued a new swing trading signal, sell at or below 2581 SPX.  The MAM continues to register an overbought condition which increases the likelihood for an immediate pullback.

MMI for Thursday: close down

The primary outlook is that a corrective move is in progress.  Weekly charts imply a bounce completing shortly and downtrend resuming.   Monthly charts shows the market to be primarily in a corrective move through February then turning up sharply.  A low is anticipated February/March.

MM MACD signal is confirmed SELL and the intermediate trend is DOWN.  The swing trade signal is SELL at or below 2581 SPX. 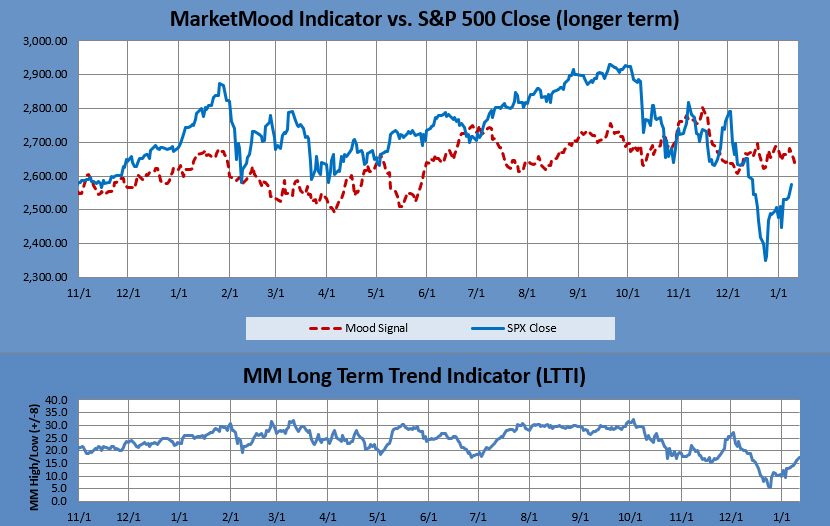