Today's mood pattern reflected topping and MMI was pointing up.  Once again, I was skeptical that it would stay up through end of day, and once again the market managed it.  Perhaps my skepticism is a contra- indicator, lol.

The mood pattern for Thursday and Friday is a combination topping pattern and slight bearishness.  MMI is looking down for Thursday (Friday open).  Friday's MMI will be in the same direction that it opens relative to Wednesday's close.  The bears should get another chance here, but the question is, what will they do with it?  They've been pretty timid for some time.

Current Signal: There is a new MAM significant trend change signal for November 22-Dec. 2.  Direction is not yet confirmed.  If there is a strong enough rally in this window, it would signal a major high (not looking likely).  A strong enough drop would signal a local low.  No confirmation at all would imply an EW diagonal is likely in play.

The weekly MMI vs SPX chart implies a market that's been ready to drop for some time, and is showing a local low early December.  The monthly chart shows a corrective decline through January or early February.

MM MACD signal is confirmed buy and the intermediate trend is UP.   The swing trade signal is buy at or above 3158 SPX. 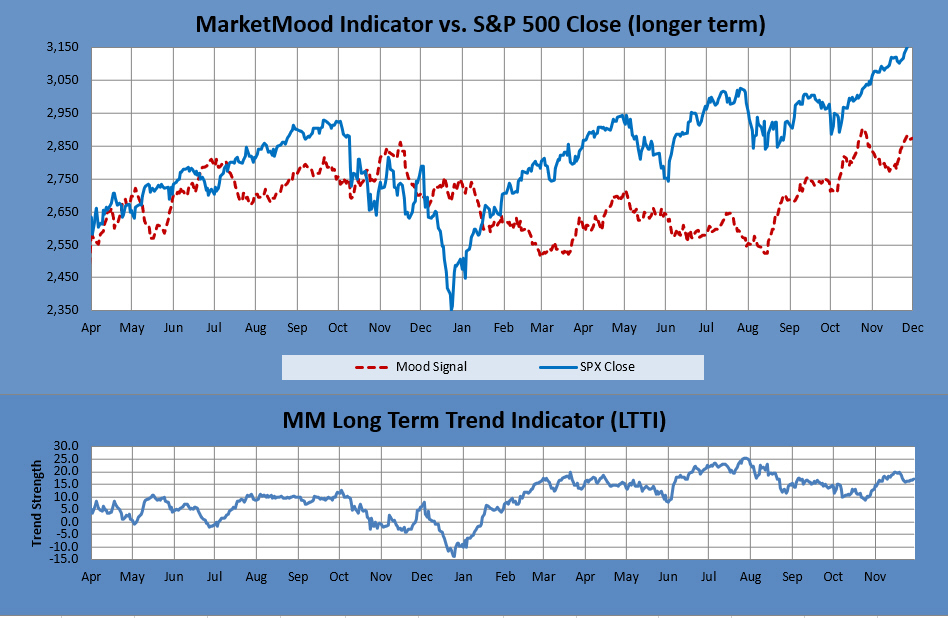 MMI recent performance relative to a long term average of over 60% correct daily up or down calls indicates how closely it's been tracking with the market near term.   In the basic daily performance stats below, posted signal flip days aren't counted in the total as there is no call on those days as to a positive or negative close.  Monday open does count as a call unless it's part of a flip.