It will really be nice when we can go back to primarily trading on the daily MMI sentiment call, but as said in last night's report, today's call was "complicated" and it was not one of those days.  Thursday's mood pattern implied an extreme and MMI was pointing down.  However, once again there are complications.  The MAM had reached levels that usually coincide with at least a significant bounce.  There was concurrent warnings of a rip roaring rally and a MMI down signal.

Today the market decided it was more important to correct the oversold issue than deal with the overall bearish mood.  A caution was posted just before closing that sometimes when a signal doesn't hit during the day it plays out after hours.  Immediately after the market closed, futures took a dive.

Friday's mood pattern is concerning because it has a lot of similarities to Wednesday's when the market was down over 3%.  However, MMI is calculating an up day.  Clearly, it's another day to be ready for anything.

MMI for Friday: close up

The Moving Average Momentum (MAM) Indicator previously signaled a major trend change with a major LOW indication between April 18-25 (there was a closing low on the 25th which repeated, closing slightly lower on May 3-- a major low).

The latest MAM signal of a major trend change showed a major low likely sometime between Oct. 11 and 18.  The closing low on October 11 led to a significant rally, but a new low was struck on October 24.  There is no evidence at this time that it will necessarily hold as a major low.

The primary outlook is that a corrective move is in progress.  Weekly charts are pointing downish over the next couple of weeks.   Monthly charts show the rest of the year as relatively flat which can include both large drops and upward reversals.

The long term forecast remains bullish, but the trend has weakened substantially over the last few weeks, and is very near turning neutral.  The bullish long term trend is indicated by the generally positive divergence between the stock market and the mood generated forecast  (see long term chart below).  The MM Long Term Trend Indicator (bottom chart) which is derived from this divergence, indicates: Bullish Trend, hold long positions.  The MM LTTI has had this same bullish indication since 12 Sept., 2016. 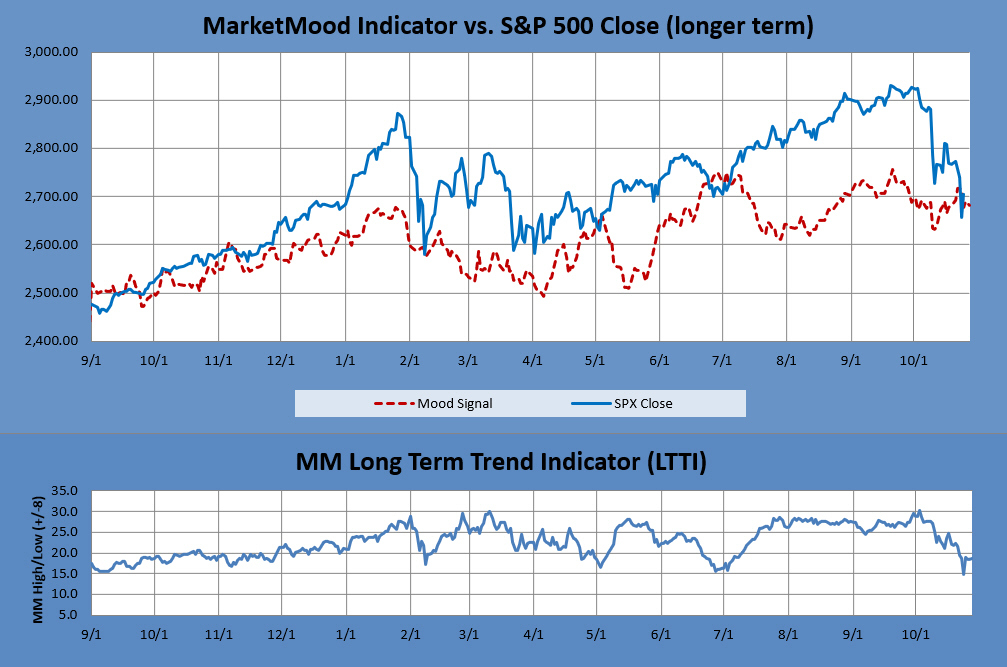