Caution lights were flashing last night and it looked like the drop would start "today or tomorrow."  MMI was calculated up, but caution was advised and several reasons given for that.  1) The mood pattern points to volatility today (and elevated societal violence risk today through early tomorrow).  2) MMI2 was up for today, but changed to neutral.  3) The action in the metals market yesterday looked like the awaited for flip, calculated for tomorrow, already happened as that action looked like a big flip (note: that doesn't imply MMI is bearish metals now).  For now, I'll still be watching for a flip from up to down for tomorrow (up first, ambiguity, then turning down), and hopefully the market will make it clear exactly which we are with that.  The market closed down, but was on its way up and futures shot up quite a bit just after close.

A long awaited flip completion is showing for Friday.  The mood pattern before the flip is benign to giddy.  After the flip, and through the weekend the theme is more crisis oriented.   MMI is looking for a flip from up to down.  Ideally, this is up first, ambiguous, then down.

The market has been diverging from where it would be more sustainably in line with sentiment.  The daily and weekly trend indicators are now as overbought as they were in February just before things started heading south.  Note: that by itself is not a sell signal, but it's worthy of note.

MMI Friday: flip up to down

The weekly price chart shows what is an extremely overbought market in need of correction, and is pointing down through mid-August.  The weekly trend indicator shows an extremely strong bullish trend, but the weekly MM MACD has turned neutral from bullish.  Monthly charts are pointing primarily down through August, and quarterly charts show a drop into end of year.

The long term trend is indicated by the general divergence between the stock market and the mood generated forecast (see long term chart below).  The MM Long Term Trend Indicator (bottom chart) which is derived from this divergence, indicates: "Bullish Trend, hold long-term bullish positions."  The MM LTTI has had this indication since 29 Jun 2020.    See further LTTI data below the chart. 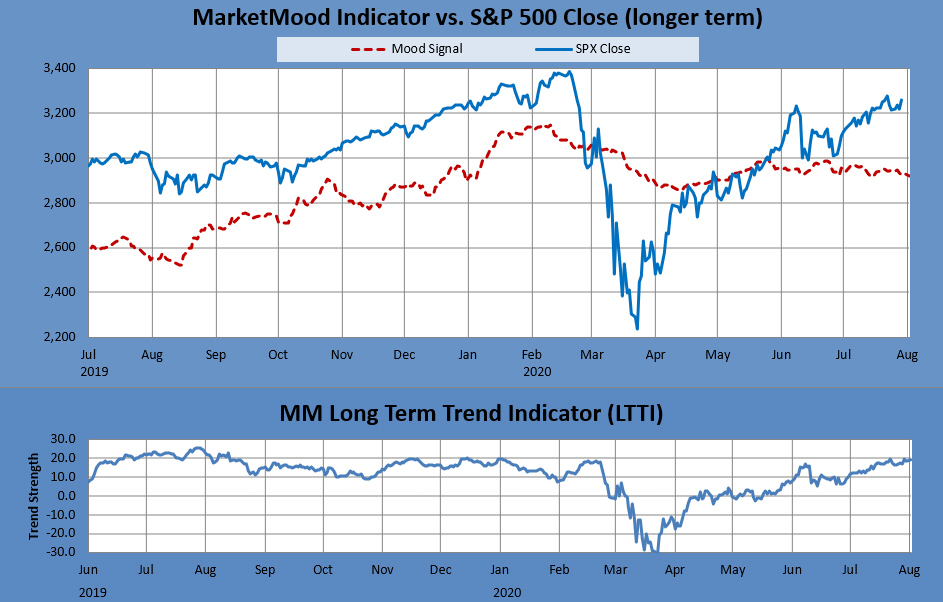 Mood vs. effect is currently inverted so the bottom of the chart has been primary.  The next flip will complete Friday as Vulnerable/Expansive begins to move nearly parallel.  After that, the top of the chart becomes primary.  After the flip, a "crisis mode" pattern is showing through the weekend.

Conclusion: market tracking with sentiment on a day by day basis has been running way below average so far this year.  Recently, it's been tracking below the average for the current year's performance.  Daily up/down calls will likely not be reliable until the current market context of repeating diagonals and corrective structures has past.