Today's mood pattern was ambiguous, but MMI gave the odds for a down close.  After an upward meandering much of the day, the market changed its mind and closed unchanged.

Tomorrow's mood pattern implies strong or passionate emotions alongside plain old irrationality (not a day for logic or reason).  MMI gives the odds to the upside, but one has to be extra careful with these extra irrational days as they often don't make sense or behave according to plan.  MMI is undefined once again for the weekend (Monday open).

MM MACD trade:  There is still a swing sell signal at or below 2992 SPX.  I'm not going to offer trade parameters on a new trade on this should it trigger again.  Twice now, it has been a good scalp trade signal.

The weekly forecast implies a market ready to drop for at least a week or two.   Monthly charts show a market in need of a correction.  They also show a big trend change around October.

MM MACD signal is confirmed SELL and the intermediate trend is DOWN.   The swing trade signal is SELL at or below 2992 SPX.

The situation remains the same.  The long term trend indicator (LTTI) continues in bullish trend / topping mode.  The long term trend is indicated by the general divergence between the stock market and the mood generated forecast (see long term chart below).  The MM Long Term Trend Indicator (bottom chart) which is derived from this divergence, indicates: "Bullish Trend, Hold long long-term positions."  The MM LTTI has had this indication since 13 Feb 2019. 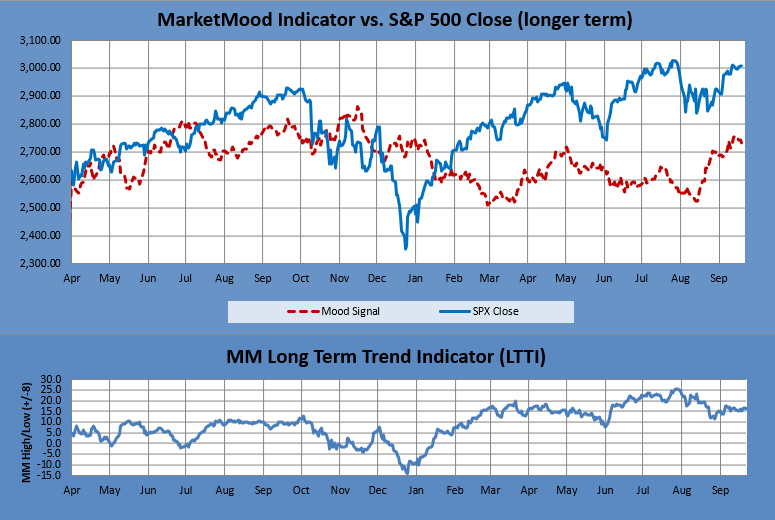