MMI was up for today and the market played along-- until it didn't.  The mood pattern implied that people were more irrational (delusional) than usual and this morning's bounce was an illusion as well.  I put out a post this morning stating that, and also that a Sharp Drop Alert was showing up on the chart.  A short time and Trump tweet later we got a sharp drop.

Tomorrow's MMI is down and the mood pattern points to a focus on government or geopolitical issues and a possible crisis moment.  Both this mood and a Sharp Drop Alert were for Friday, yet a Trump tweet mini-crisis and SDA occurred today.  I can't say for sure whether the market has used up some or all of Friday's bearishness or whether more downside and further crisis type news is in store for Friday.  MMI2 is pointing up for tomorrow, cautioning whipsaw or intraday trend change(s).  Overall, it's a day to pay close attention as the situation could change at a moment's notice.  The weekend's MMI is "undefined" so there is no call for Monday open (MMI2 also has no call).

Sharp Drop Alert: There is a higher than normal risk for a sharp market drop through Monday open.  This signal is generated when markets are overbought and the sentiment derived forecast is flat (see chart)

The weekly forecast implies an extremely overbought market that could sharply correct at any time (which may currently be in progress).   Monthly charts show a market in need of at least a quick sharp correction (which may be in progress).  They also show a rally (or bounce) into a big trend change (down) around October. 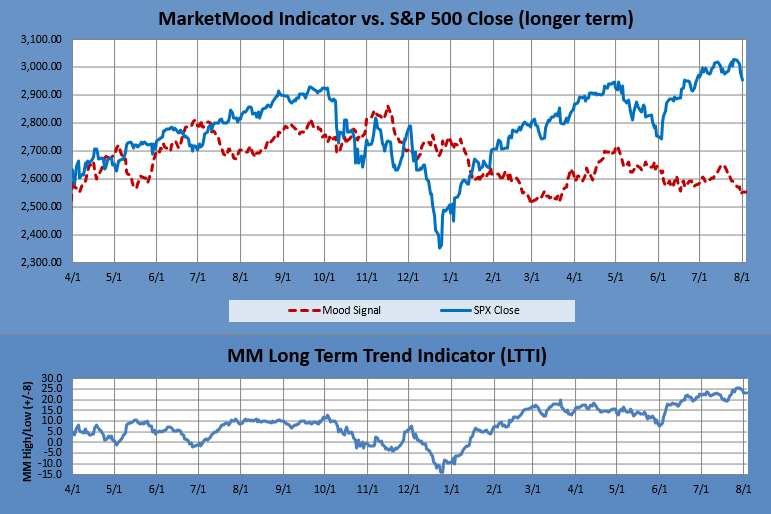