Monday’s session played out as a textbook rangebound day as we expected shaking back and forth from support and resistance. In simplest terms, the market just followed our 4-hour white line projection so it was fairly easy to trade. It gave both sides decent setups given our overall 2828-2790 determined range in the Emini S&P 500 (ES) and additional levels from the premarket ES game plan. For reference, today’s range was 2789.5 vs. 2815.25 during RTH (regular trading hours) so it was wide enough to scalp both sides.

The main takeaway from this session is that the rangebound digestion is playing out for the market transition from last week’s context. In addition, the market tendencies and stats are playing out accordingly relative to the daily 20EMA trending support zone on a first try basis after an extended run up. Also, we’re going to stick with the weekend game plan and roadmap until market invalidates it or shows us some more key hints.

Daily closed at 2808.25 and it’s pretty much unchanged from Friday’s print. As discussed earlier, the 4hr white line projection remains king for now so let’s see how overnight’s price action goes in case we need to switch up plans and adapt accordingly.

We remain neutral going into this week. We have significant daily trending support in this current 2795-2800 zone alongside with 2785 just beneath it so we have to be aware of being taken to the cleaners with a classic quarter end shake-fest where it’s just rangebound shaking from one extreme to the other. This means that the focus heading into this week is being really nimble and taking textbook rangebound trades along with the possibility of switching from BTFD to STFR strategy if bears do show continued strength.

Currently, we don’t think the bears will derail the existing daily bull train with a sharp drop below the aforementioned supports. The first try basis at key supports like these is almost always going to be defended given the extensive run from the March 8th lows along with short-term already being a little oversold. Also, we’re treating 2866 as a temporary top for now as long as price remains below 2814 on a daily closing basis. This means that we have to be open to the possibility of something like an overall range of 2785-2866 this week and imagine a tighter range in between that. If bears do surprise us then we’re prepared to switch up strategy on riding the train utilizing the next key support levels.

For now, we’re using the new 4hr white line projection chart as our roadmap heading into this week and adapt as we go if market gives us more hints. 4hr red line as the alternative on second highest probability scenario. Let’s see how overnight/tomorrow morning goes.

Clear and concise context for rest of March and into April:

The stock market and its momentum seem to be in transition given what occurred on Friday, so be aware of the possibility that the bull train is at risk if no stick-save back above 2814 immediately in the next few sessions. Also, it’s quarter-end week, so be prepared for a potential classic shake-fest trying to kill both sides.

Stay focused on key levels, level by level approach. Get in and get out on quick high probability setups. 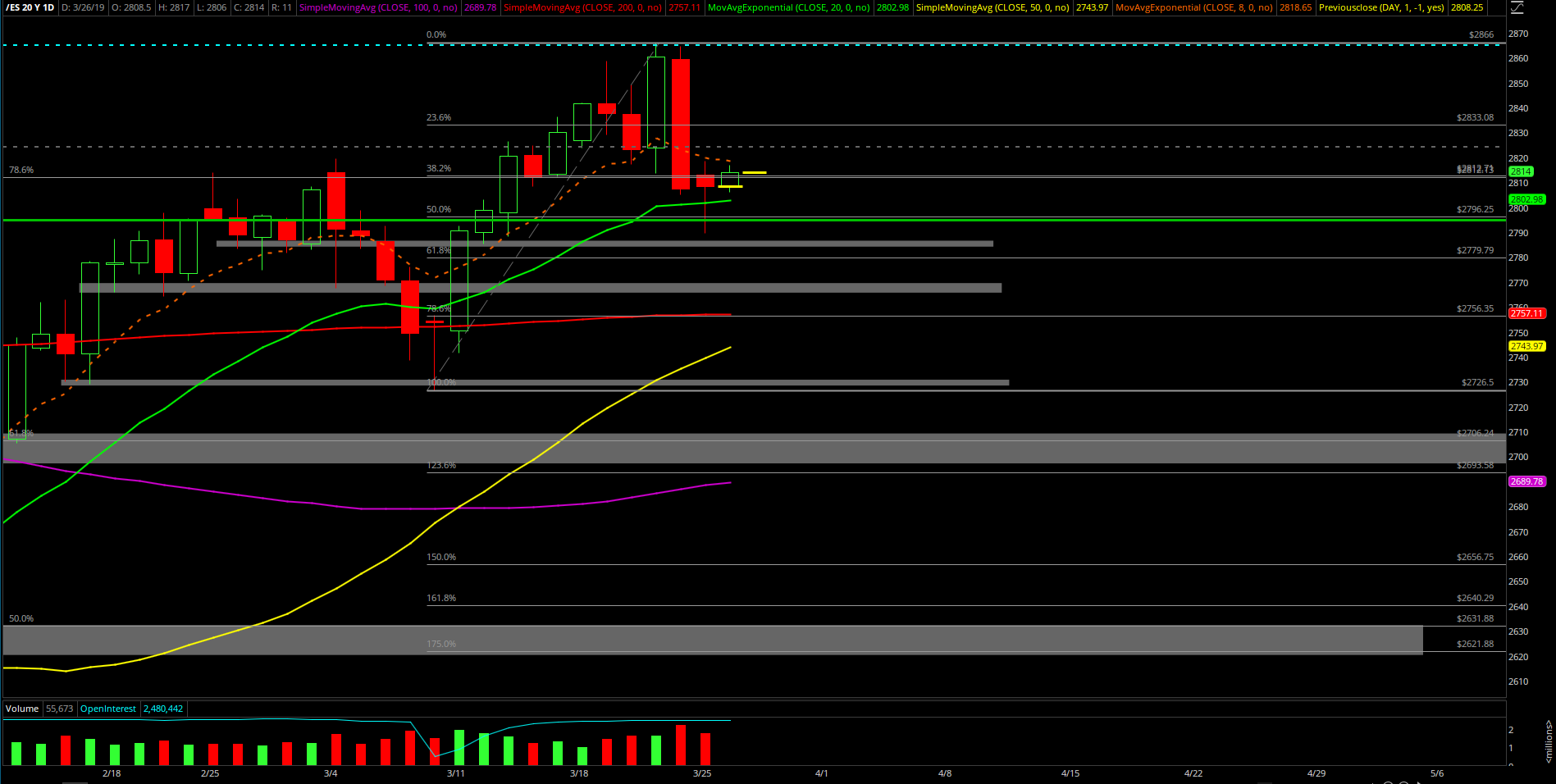 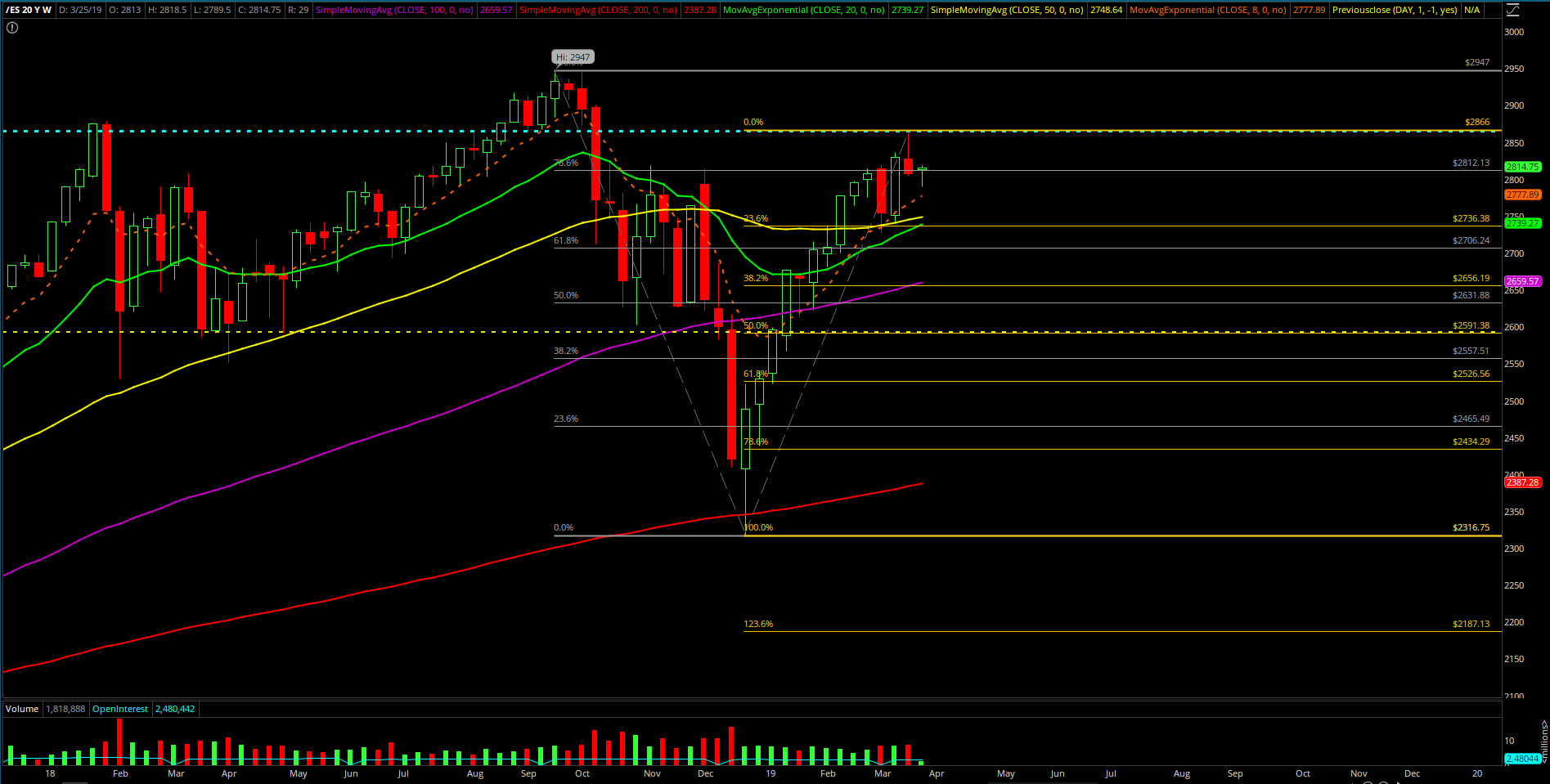 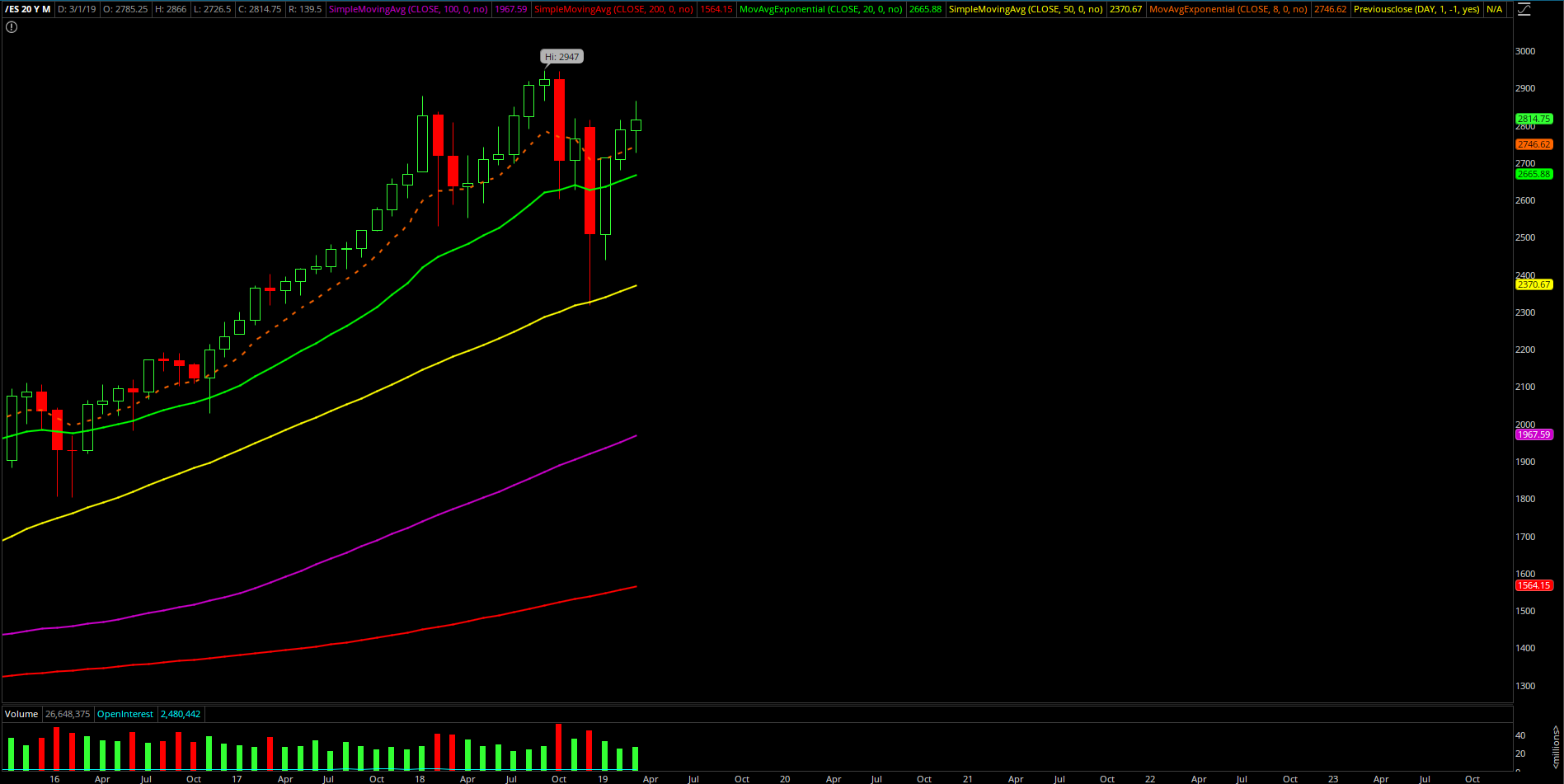 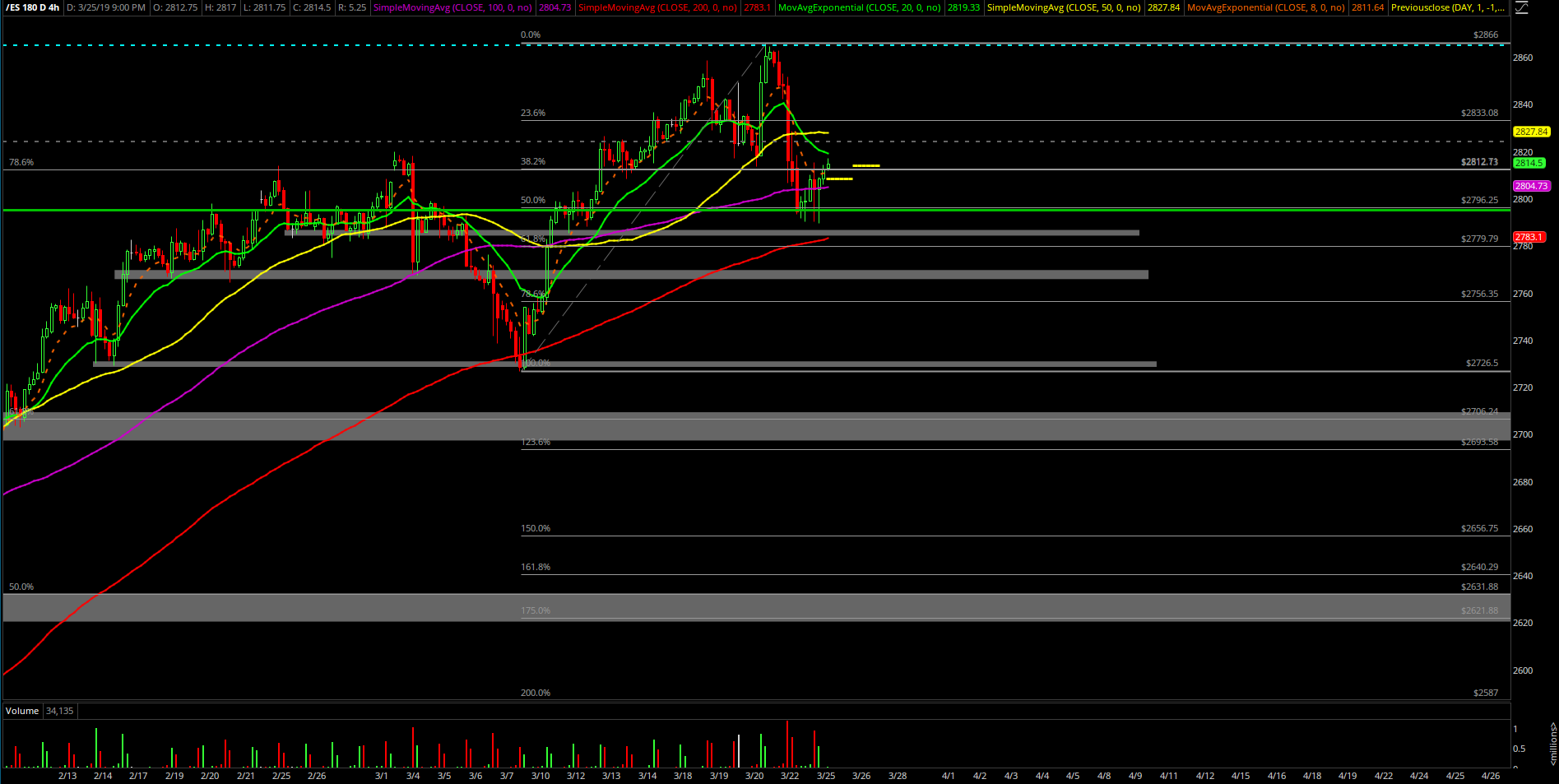 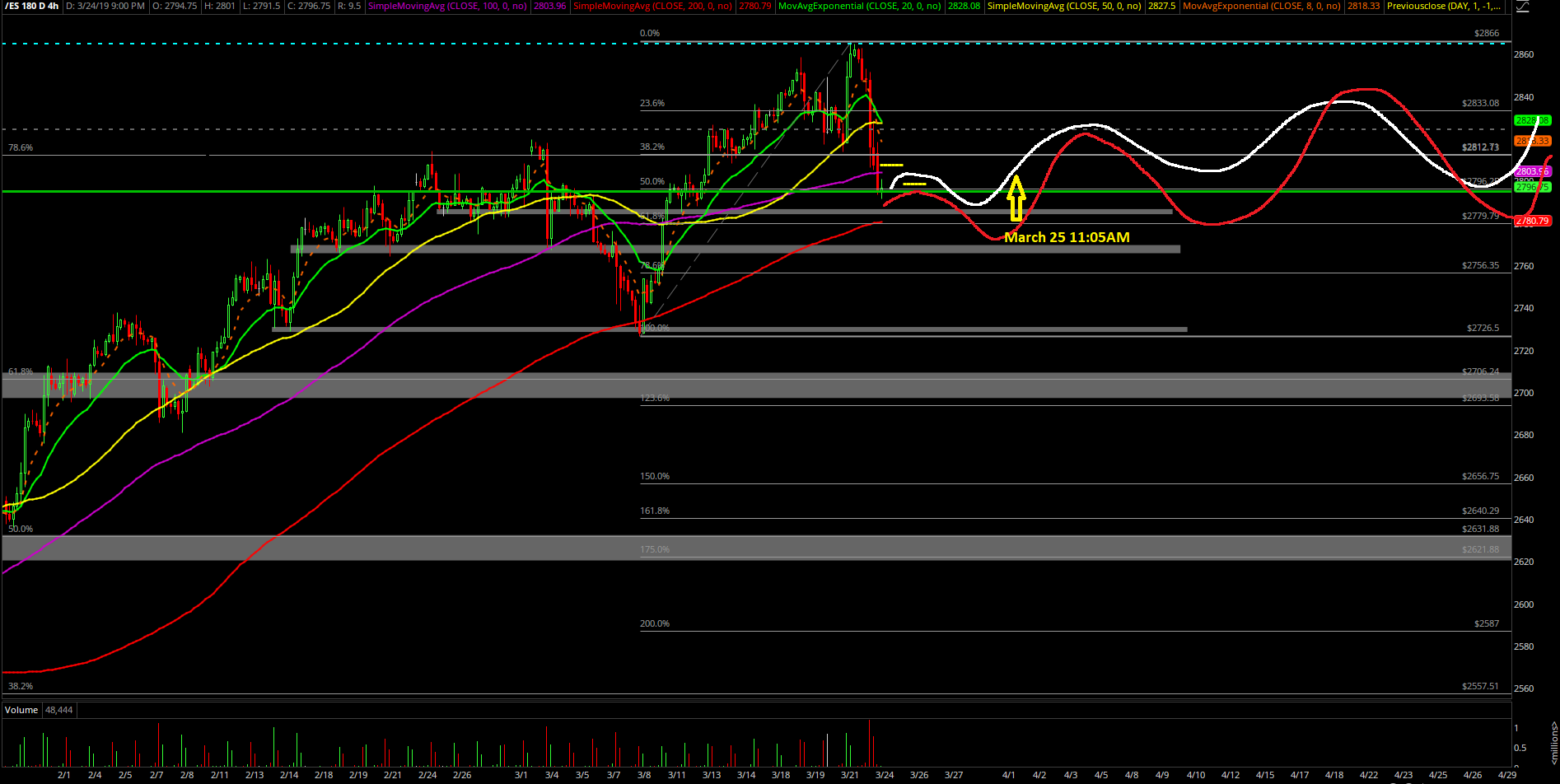 es march25review5_same4hr_pro
Ricky Wen is an analyst at ElliottWaveTrader.net, where he writes a nightly market column and hosts the ES Trade Alerts premium subscription service.