As noted in my last market update, the S&P 500 continues to consolidate as it reaches the 4000 level. This week was pretty much the same as the index went back and forth during the week as it sits just below that level. Also, note that last Friday was the famous "Triple Witching Day" which further added to the current volatility. "Triple Witching" is the simultaneous expiration of stock options, stock index futures, and stock index options contracts all on the same day. It happens only 4 times a year: on the Fridays of the 3rd week of March, June, September, and December. This creates enormous volatility.

Another fact that is contributing to the market volatility is the rising 10-year bond yields. Rising long-term bond yields mean that investors are concerned about inflation, and I will touch again on this point later in this report. If inflations and "yields" continue to rise, that could potentially cause some concerns about the stock markets.

The Fed Is Not Worried About Inflation "For Now"

The Fed is very optimistic about the outlook of the U.S. economy. On Wednesday, it sharply upgraded its 2021 GDP growth forecast to 6.5%, the largest annual growth since 1984. Fed Chair Powell added that inflation will reach 2.4% this year, but called it a temporary surge. The biggest news was a pledge not to raise interest rates until 2024 and the continuation of an asset purchase program.

The Fed Want to See "Results"

Unlike previous U.S. Fed Chairs who acted based on forecasts and projections, Mr. Powell wants to see "results" first. He is quite adamant the Federal Reserve won’t raise rates until they see a 3.5% unemployment rate and inflation averaging 2% for a few years. He was also emphatic that he wanted to see these numbers not just "forecasted" but as actualized, real results. He made clear they would tolerate the economy “running hot” and inflation above 2% for a period of time.

The bottom line is that the U.S. economy will be running hot over the next few years, which will be very bullish for many economically sensitive stocks and sectors.

The world is already swimming in liquidity, with some of it pouring into the equity markets and much of it remains on the sidelines or invested in long-term treasuries that are eroding in value.

Much more liquidity will be added to the system in the year 2021. The new administration is on a spending spree to get the economy back on its feet. In addition to a trillion in stimulus bills, there is a much-needed infrastructure package probably coming soon, and perhaps a Green New Deal. All of which will open new opportunities in the stock markets.

The Other Side of the Coin

Some investors are worried. In the past, all Fed moves were consistently pre-emptive ones. If the Fed is so confident about the health of the U.S. economy, then why not step a bit on the brakes to stop the potential of an overheating economy? This worry has resulted in soaring long-term interest rates as we can see in the 10-year bond yield (one-month chart) below: 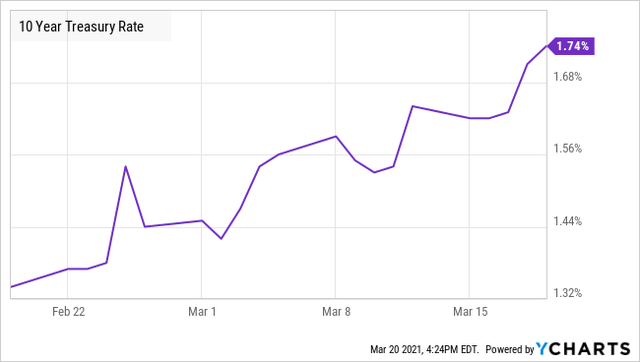 This clearly shows that some investors are worried about the potential of rising inflation.

My Take on This

Fed Chair Powell is right about letting the economy run hot until we have steady inflation of 2%, which has been the target inflation for the Fed for many years now. The Fed has been struggling for decades now to reach this target and was not able to. The reasons? I have explained this a few times before. An aging population coupled with reduced population growth in the U.S. globally means that there are fewer people entering the labor force today. Sure the global population is still growing, but not nearly at the same pace as it was 20 years or 30 years ago. We know well that the main driver of economic growth is consumer spending (and consumption). When population growth was high, it was relatively easy to get out of a recession. Back then, a recession would last only last 2 or 3 years. With our demographics today, if we hit a recession, it could last well over 5 years and could be very painful and devastating. I would personally rather take the risk of having some inflation rather than taking the risk of hitting a very painful recession.

The 2nd important point is that the risks of inflation are overstated, at least for the next 2 years. I believe that technological advances, global competitiveness, increased productivity (such as working from home), and the continued rise of disrupting technologies that result in pressuring prices, will all put a lid on inflation. Therefore the worries about an imminent rise in inflation are not warranted. Importantly, the current level of 10-year yields is not going to derail the equity markets. Let us put things into perspective. Back in the year 2019, in the midst of the bull market, the 10-year yields were running around 2.5% and that did not stop this secular bull market. It is not until yields reach 4% or higher that it is time to get worried. 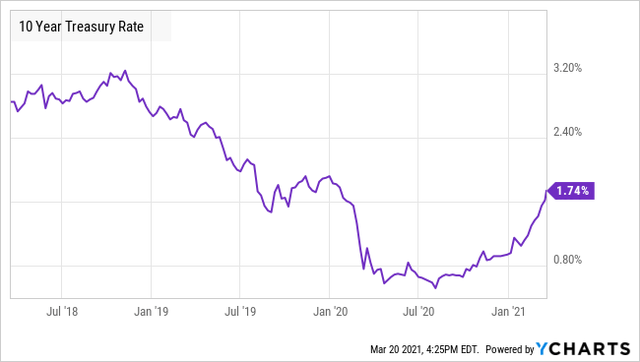 Value Stocks Will Continue to Outperform

Over the next two years, economic growth will be the biggest driver for stocks: "Value stocks" tend to be economically sensitive and usually see higher earnings growth at the beginning of an economic recovery. Note that these "value stocks" are usually the small and medium companies (the heart of the U.S. economy) that will be the prime beneficiary of the stimulus plans.

At the same time, this will correspond to weaker demand for COVID-19 related winners, which include some of the fastest-growing companies now trading at insane valuations. During this transition to a post-COVID economy, I expect the current frenzy for aggressive growth will give way to more upside for "value stocks" with solid fundamentals – exactly like the ones that we target at "High Dividend Opportunities". Even with the big recent rally in "value stocks" most of these stocks have been out-of-favor for several years, and the recent gains have barely improved their low valuations. Therefore I remain very optimistic that our stocks will deliver strong performance in 2021 and 2022 at least.

Some of our best-positioned sectors are the financials (BDCs and Asset Managers), Mortage-REITs, Property REITs, Collateralized Loan obligations (or CLO) Funds, Oil and Gas, floating-rate loans CEFs, and Utilities (which are set to benefit from any new infrastructure plan).

The worry about rising interest rates is likely to be a temporary one, and short-term pullbacks are buying opportunities. It is only a matter of time until we break above the 4000 level for the S&P 500 level. Once we do, the index will be looking for another 100 points higher, and ultimately reach my target of 4300 for the year-end 2021. On the downside, there is plenty of support for the index at the 3800 level where many buyers are likely to jump in. I remain very optimistic about the outlook of equities over the next two years. Again, I would like to remind our members not to time or trade this market. It is best to be a long-term investor, especially during a bull market. It is our strategy at "High Dividend Opportunities" to buy and hold dividend stocks for the long term with the objective to collect the high income.

I know that some of our members are worried about the possibility of rising inflation. While it is too early to worry about it, I will be releasing soon a report that will include "The Inflation Portfolio". I will personally not start hedging until towards the end of 2021. Usually, the best approach is to hedge 2 years ahead, because "inflation hedges" tend to rise ahead along with "inflation expectations", trailing them by around 24 months. I will have the list handy ahead of time for our members to be prepared. Stay tuned!