The 4th week of October was just a waiting game as we had discussed previously, and price action finally broke out above the trading range of 3015-2975 on Friday Oct 25. The bulls have kept up the acceleration pattern as the past couple of weeks have sticksaved at the daily 8EMA and just grinding above. In other news, Nasdaq 100/NQ has been leading the way and had already accomplished the new all time highs print compared to SPX/ES just a touch away.

The main takeaway from the 4th week of October is that the bulls are doing what was expected and keeping the trend strong and alive heading into the month end print. If you recall the massive hammer on the monthly chart candle -- well, the bulls are obviously attempting to wrap up this month at the highs on this coming Thursday. Zooming out, the road into 3193.75 may be opening up as we head into year 2020 if bulls do want to accelerate even higher and make this above a +20% year which would be insane.

Friday closed at 3019.75 on the ES at around the highs and it was a decisive breakout above the past few sessions of bullish consolidation in the 3015-2975 zone. Heading into this week, immediate trending supports are 3016 and 3000 and all dips are buyable when above given the trend and the market attempting to accelerate even more. The latter level represents Friday’s low, and it would be a full retracement if the mythical creatures show up and reject the immediate acceleration pattern higher for the next few days. In reality, bears would need a breakdown below 3000 and then below the week’s low at 2982 to force a massive bear engulf or bear rejection setup on the daily/weekly charts.

Overall, nothing has changed in our perspective as the market keeps grinding out higher lows and higher highs. Please see the attached charts and a new 4hr white/red line price projection below for visual representation of the ongoing trend. As always, white line is primary for now and red line is the alternative, when both projections are showcasing the same end goal it just means a trend is intact and remains high probability and things change/break. Essentially, we expect the short-term pattern to grind towards 3050~ when above the immediate trending supports.

If the bulls accomplish their goal properly as per expectations for the Thursday month end or weekly print, then we can talk more about the potential pathways towards the 3193.75 measured move target for the macro picture. Until then, focus on the short-term here for now as price is attempting another round of acceleration and trying to elevate above the 4hr grind up trading channel. 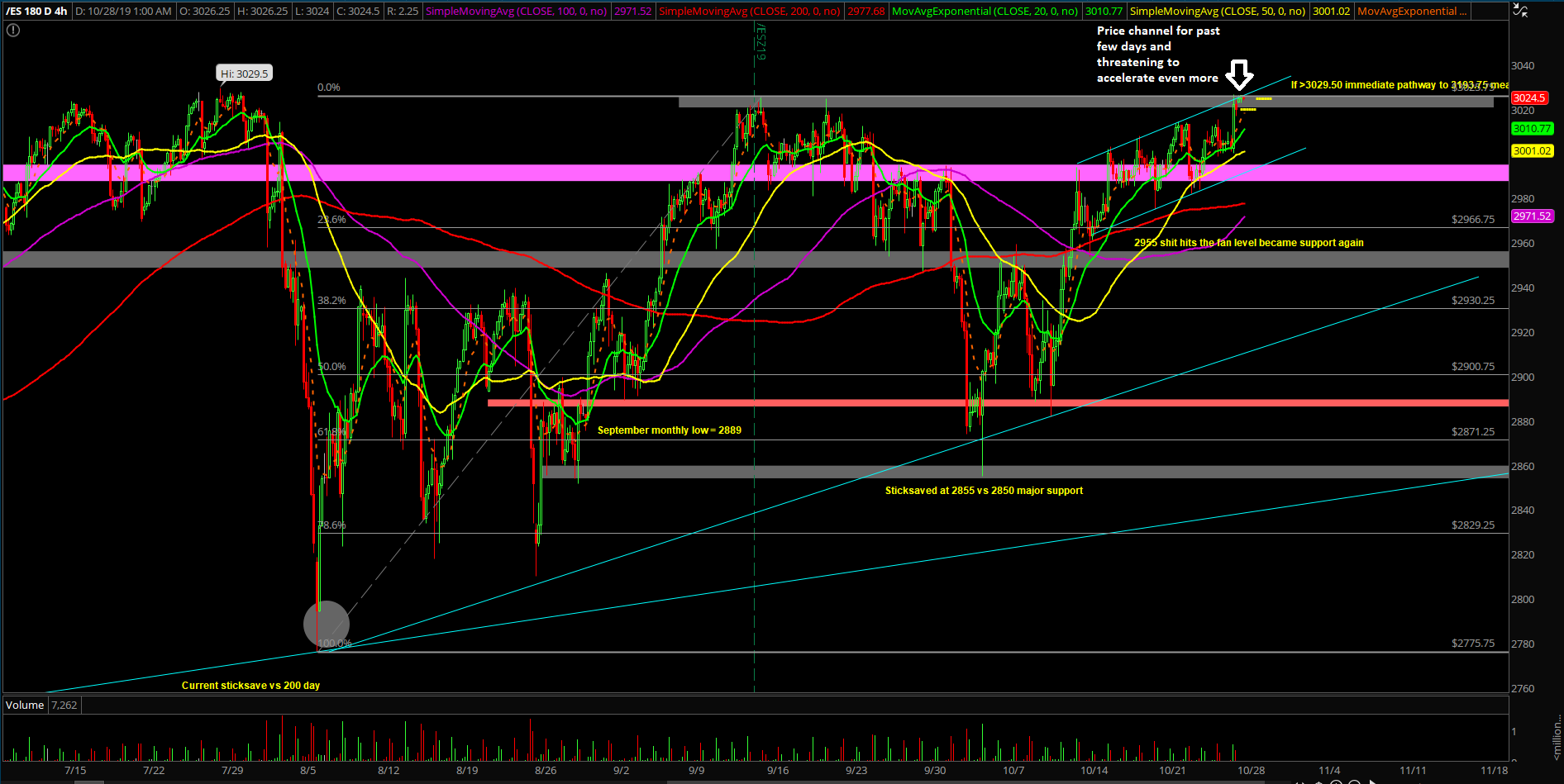 ES OCT27REVIEW5
Ricky Wen is an analyst at ElliottWaveTrader.net, where he writes a nightly market column and hosts the ES Trade Alerts premium subscription service.