Is Elliott Wave Predictive in Nature?

This is a common question that I run into in my writings outside of this site. In fact, many times it does not come in the form of a question but rather a matter of fact statement from someone commenting on an article. Those comments are usually not very kind and will state very confidently that Elliott Wave is NOT predictive in nature.

I typically respond to these comments with the following statement:

"No system is perfect which is why one must always exercise proper risk management when trading. Elliott Wave is absolutely predictive and provides predefined entries, exits and stop levels in which one can pre-determine risk vs. reward when setting up their trades. We have so many instances when we see targets hit within pennies of pre-determined levels to chalk it up to happenstance just simply not statistically possible to be anything other than predictive."

I have written about this in the past in an article titled "The VXX: It's Not Magic, It's Fib Pinball - A Real World Example of How To Execute and Manage Trades Using Fib Pinball" in which I laid out a trading plan complete showing the steps along the path using Fib Pinball as entry, exit and stop levels which resulted in an option trade with a total return of 4x the capital outlay.

Just last week I also pointed out a setup in the VXX in the VIX room when the VXX was trading at 37.10 and in the retrace zone for a potential wave (2) to the upside. At the time I had presented a few different option workups for both weekly short-term and a trade into the end of this week. The trade moving into this week had a target of 32.02, again when the VXX was trading at 37.10 or $5.08 (13.69%) over the target level. Today the VXX bottomed at 31.92 prior to seeing a small retracement, overshooting the 32.02 target by just 10 pennies prior to retracing allowing for an optimal final exit point. The options trade associated with this traded ended up returning anywhere from 3x-5x depending on which strike was ultimately selected and where exits points were made along the path down towards the final target.

So again while there is no perfect system and there will certainly be trades that do not work out.  For traders who are willing to be diligent in managing their risk, Elliott Wave provides an excellent and more importantly consistent system in which one can plan trades ultimately leading towards a growth their capital over the long term. 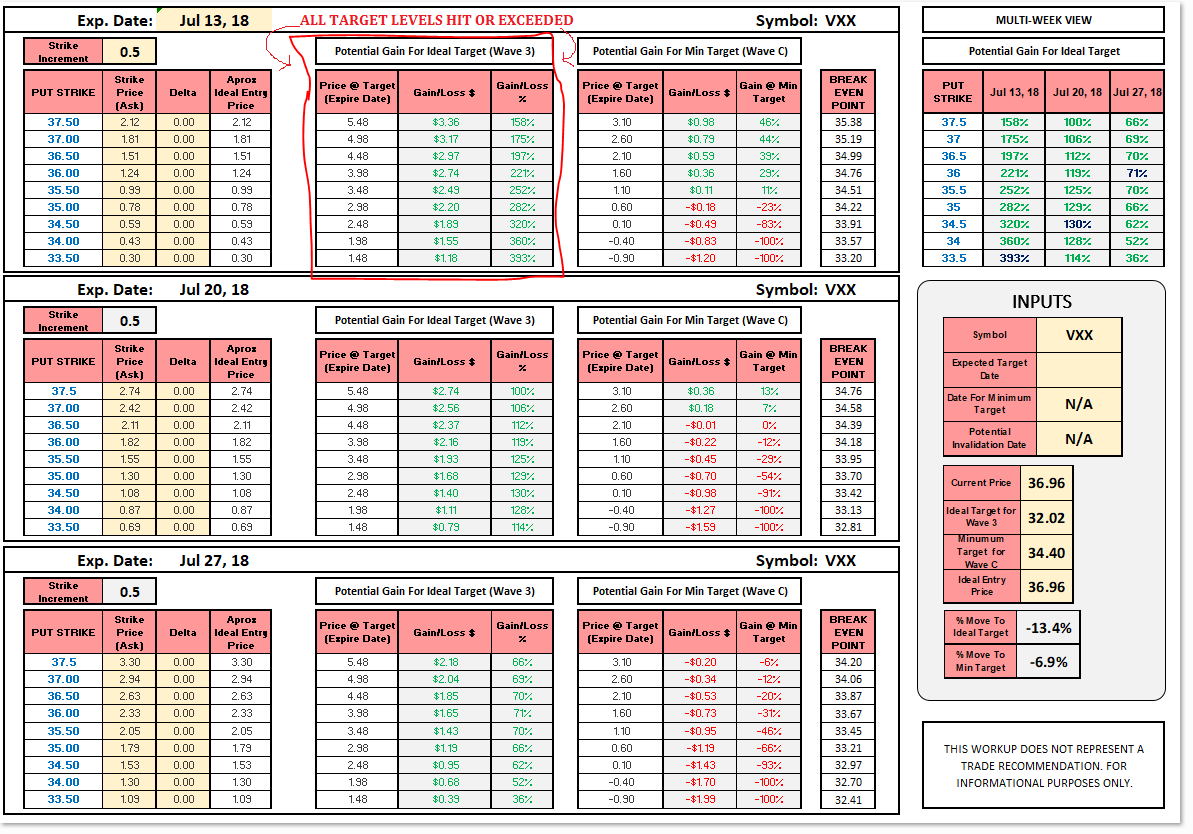 VXX Workup SETUP
Michael Golembesky is a senior analyst at ElliottWaveTrader covering US Indices, the US Dollar, and the VIX. He contributes frequently to Avi's Market Alerts service at EWT while also hosting his own VIX Trading service.