Tuesday’s session was fairly simple as the bulls were able to gap up and go due to the strong momentum from the Globex hours. The market reached an intraday high at 2874, so we took the profits at the dead high of the day given the context of price action being so close to the all-time high (ATH). If you recall from our prior report, we expected the market be rejected in its first test of the ATH, so no surprises as price action followed the plan. Then, weakness continued into end of day, so we took more profits later in the session at around 2862 in order to regroup and look for another chance to board the bull train again later this week if so. Overall, it was a fairly fun day riding the train as the market tendencies continue to play out according to plan.

The main takeaway from this session is that the S&P 500 (SPX) made a nominal new ATH, but obviously the Emini S&P 500 (ES) did not on its first try against the January ATH level. The market is now in a textbook backtest/throwback pattern now as long as it holds above last week’s supports.

Heading into rest of the week and month, we’re currently treating anything above 2835 as a BTFD opportunity, and if a pullback does somehow overshoot then we’re using 2817 as a must-hold level. Micro wise, immediate trending support is located at 2846 given the Globex action. Also, it's Fed day Wednesday with the usual 2PM EST timing catalyst as an excuse to move, so traders need to be aware of the usual shenanigans/shakefest. Overall, nothing significant has changed as things going according to plan still. Repeat…

For those with higher timeframes, we maintain same perspective as last week’s reports:

At the moment, we’re treating all of this micro action overall 2791-2850 as a monthly bullish consolidation given what we see on the higher timeframes pattern and goals. For reference, current Aug month low is 2791 and market is still sporting the daily 8/20ema bull train pattern, 2825 not letting go easily yet. All this shake and bake/consolidation is inherently considered bullish when above 2791 and most ideally above 2800 at all times for the bigger edges towards ATH 2878.5 retest and breakout pattern. Zoom out to higher timeframes; we see more clarity as weekly/monthly is basically just bull flag/continuation pattern in order to ramp up again. 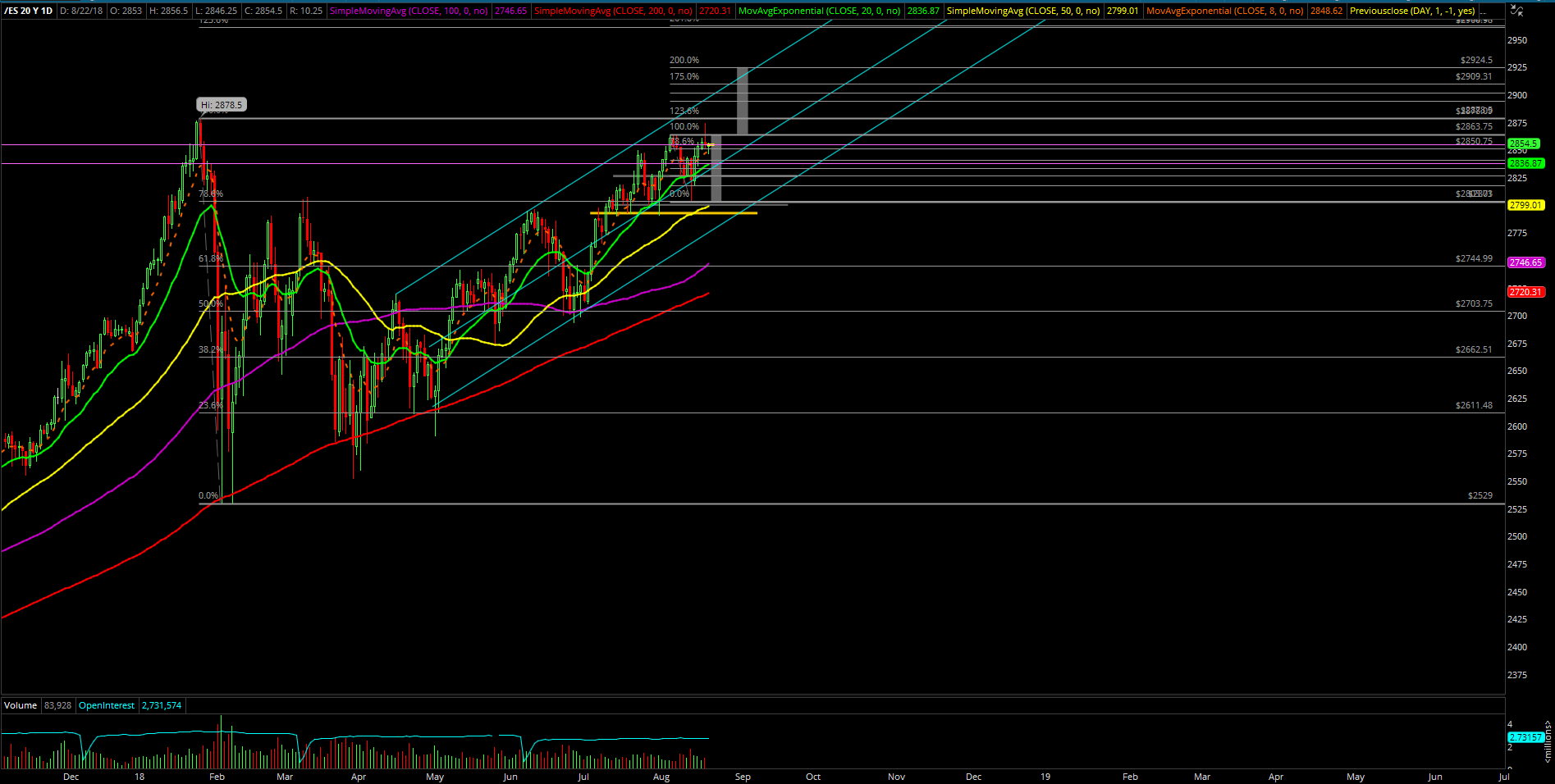 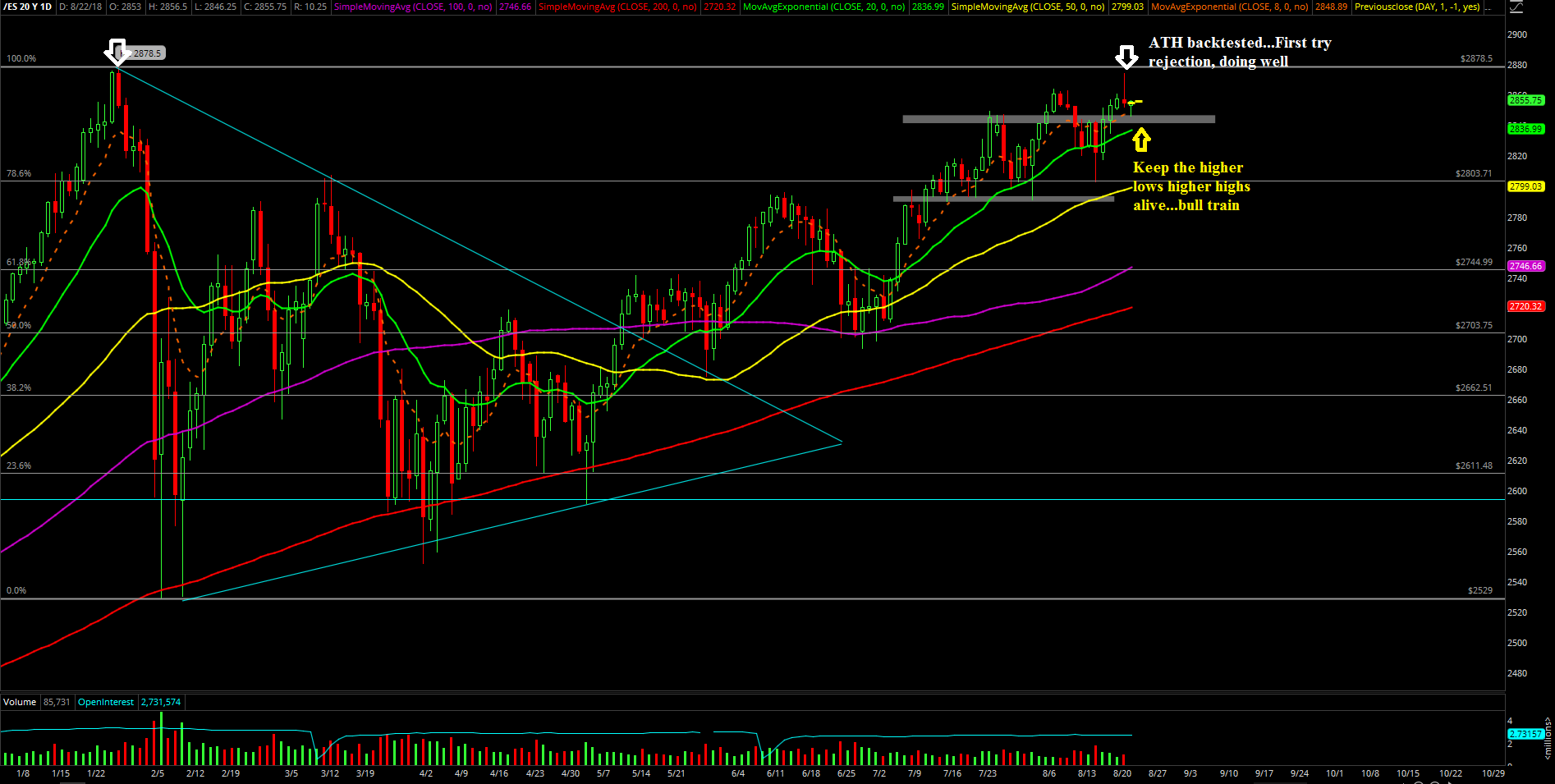 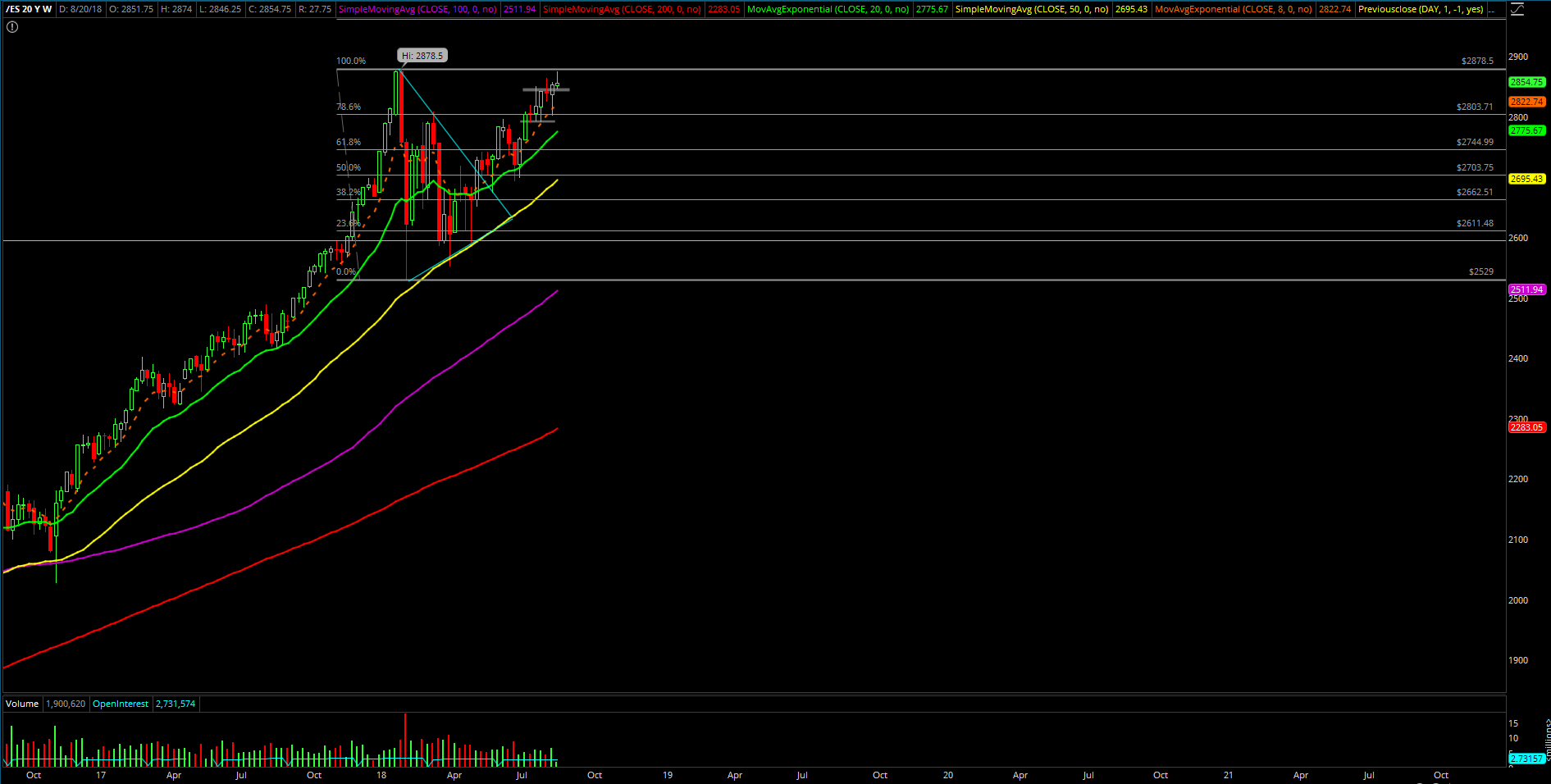 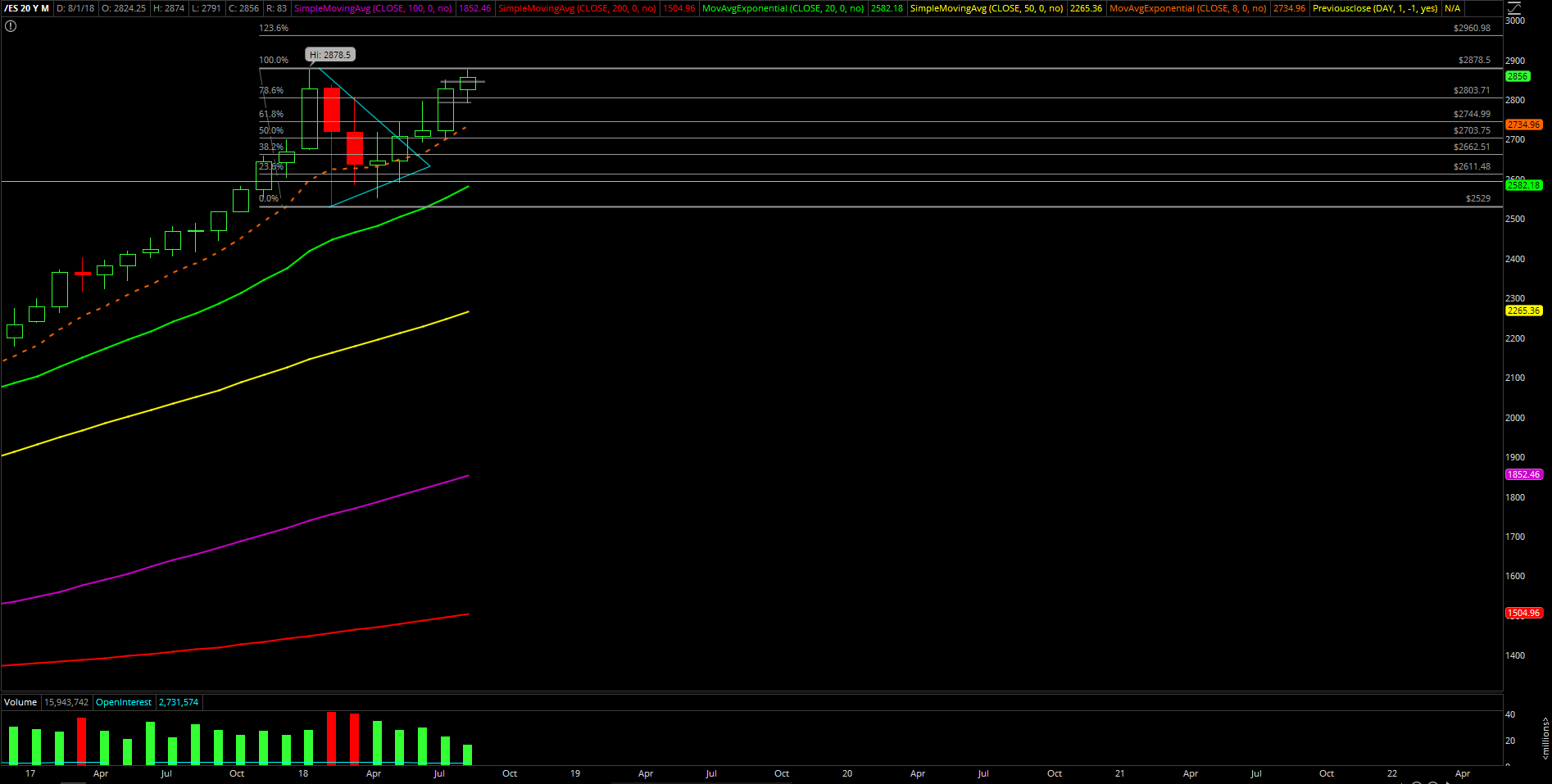 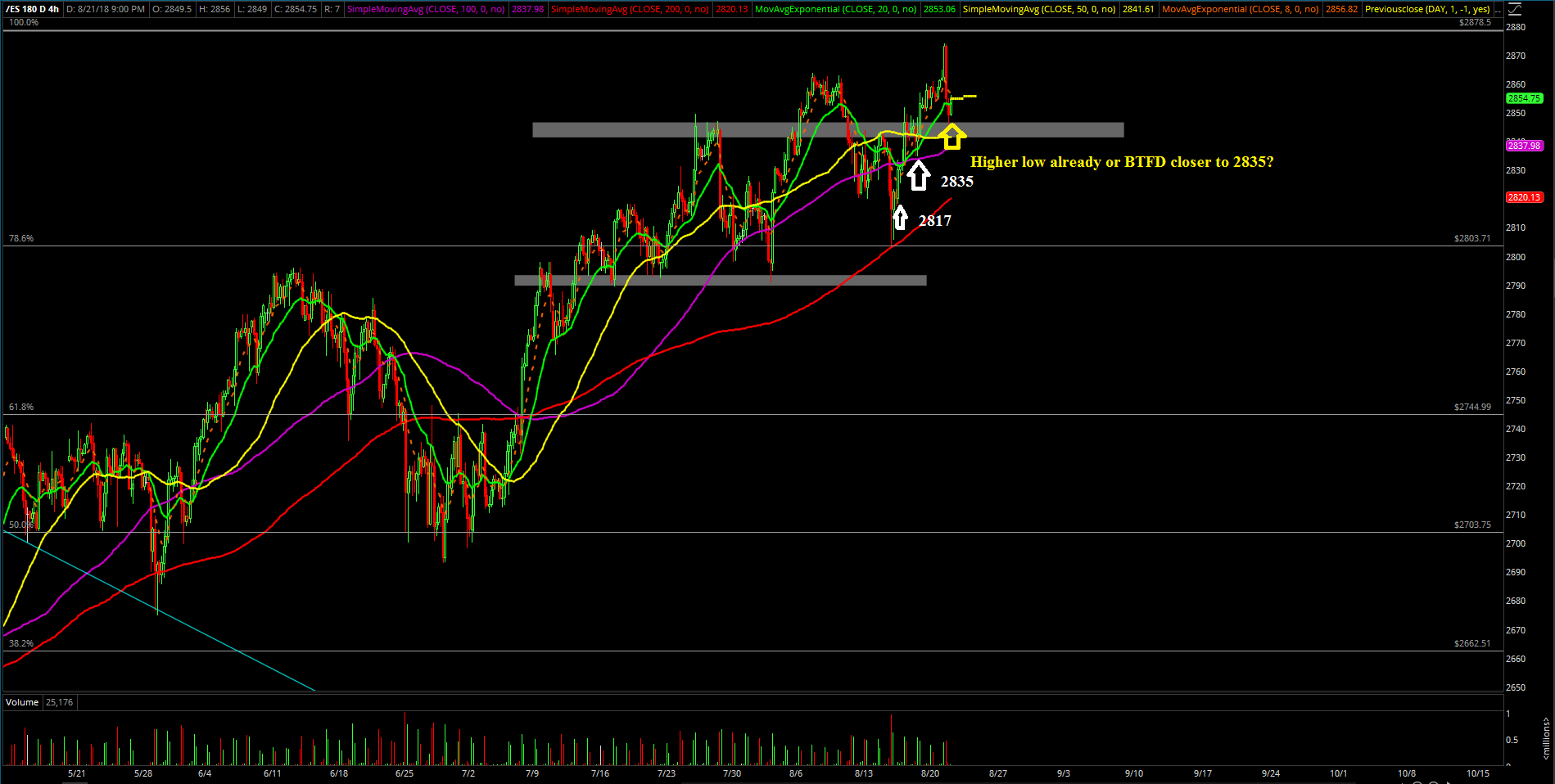 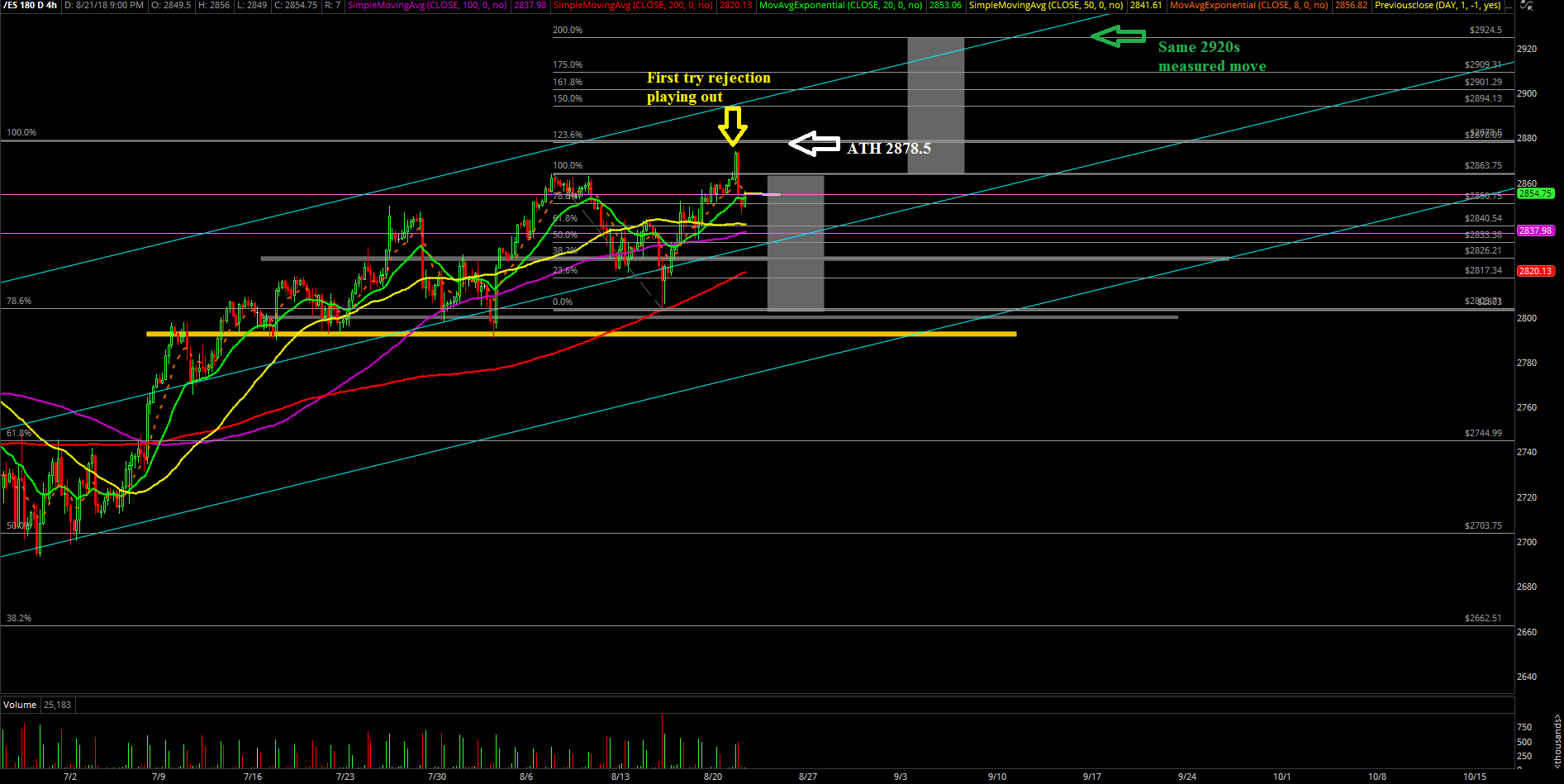 es aug21review6
Ricky Wen is an analyst at ElliottWaveTrader.net, where he writes a nightly market column and hosts the ES Trade Alerts premium subscription service.