It is one thing to identify a bottoming region in the market.  It is an entirely different thing to confirm that we are in the heart of a 3rd wave, which is where you ideally want to be in the market.  And, I hope that 2017 has taught everyone that lesson.

It was for this reason that I had continually warned our members week after week not to get overly aggressive on the long side until we get confirmation that we are in the heart of a 3rd wave up.  And, as I have noted over the last several months, it will likely take us into 2018 until we are set up to see that confirmation.  So, I am still going to suggest some patience from you, at least until we can get our next break out set up, and then confirm a 3rd wave is in progress.

Until such time, I am going to be VERY cautious about the upside until I see a solid 5 wave structure break out through resistance.  While today’s rally “looked” good in silver and GDX, I cannot say the same yet about the GLD. So, I am going to be taking this one step at a time, so please have patience, as we try to confirm a larger degree bottoming in the complex.

The GDX and silver held right where they needed to, and provided us a nice rally today.  Based upon my weekend update, the GDX needed to break out through the 22.30 region to give me an initial signal that we MAY have a longer term bottom in place.

However, the GDX stopped dead in its tracks right at that resistance point.  And, yes, that can still count as the 4th wave up we have been tracking, and there is no overlap with wave 1, as I can easily count the low near the wave 1 low as the b-wave of wave 2.  In fact, the micro count works out even better that way after I worked through that micro pattern this afternoon.  And, I have noted this pattern on the 8-minute chart.  So, as long as we remain below 22.30 region, caution is still needed.

Now, assuming we are able to break out through the 22.30 region soon, then I will likely abandon the most bearish pattern that I have had on the GDX, which was pointing down to the 17 region.  Rather, I will maintain a lesser bearish potential, as shown on the GDX-ALT chart, where I would consider this rally a bigger wave 4 in an ending diagonal for the c-wave down.  In fact, if you look at the ABX chart, this would coincide perfectly with a iv-v structure, pointing to a lower low in the ABX to complete all of the 2nd wave pullback off the August 2016 highs.

But, I want to strongly reiterate to anyone who has a time horizon of longer than a few months that the ABX technicals are STRONGLY suggestive of bottoming price action, similar to what we saw at the end of 2015.

In viewing the more bullish alternative in yellow, if the market is able to provide us with an impulsive break out through the 23.17 level in the coming week or two, then I can begin to move into the more immediate bullish potential in the market, as presented by the yellow count on the daily GDX chart.  But, again, I am going to warn that I will not suggest getting VERY aggressive until that yellow wave (1)(2) take shape, followed by a break out over the top of wave (1).  THAT is the signal that the heart of wave 3 is in progress, and that is the time when you can become much more aggressive on the long side of the market.  Until such time, I am going to continue to be somewhat cautious.

When I move over to the GLD, to be honest, viewing this “rally” as a 4th wave of the c-wave down also works much better, and aligns itself with the ending diagonal c-wave in GDX, along with the iv-v in the ABX.  Moreover, silver can also sustain another drop as long as it holds over the 15.34-15.60 support we have been watching so carefully.

So, while the market has rallied quite nicely today off the support we have been watching so intently, it certainly may have found a long term bottom.  But, as I started this update, there is a big difference between identifying a bottoming region, and confirming that bottom is in place.  Ideally, I still think there is potential for that dreaded one more lower low, and I am going to be tracking it quite carefully.  But, as noted about the GDX, for anyone who has a time horizon on longer than a few months, you need to consider your actions very carefully, especially weighing that with your risk profile.  I believe that we will likely be striking a major bottom in the next few months, if we have not already struck that bottom.  Yet, for now, I am stalking the one more lower low.

If you have questions, please post, as this is NOT an easy region to navigate, even for me, and I have been doing this for quite some time. 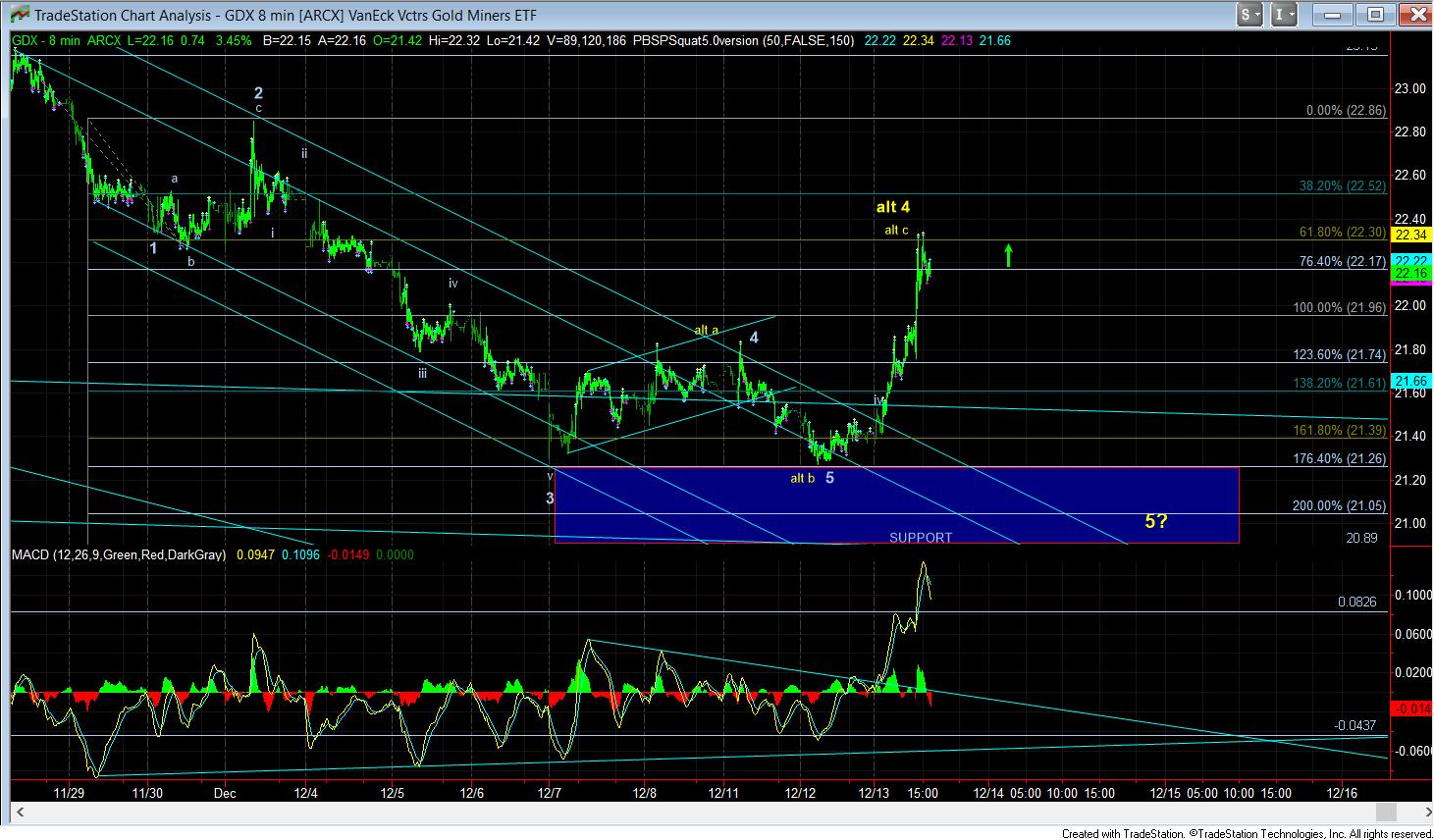