The Bayesian Timing System (BTS) still sees a wide trading range between current prices and the 340s before either an extension of the bull market or an initiation of a bear market.  If the SDPR S&P 500 ETF (SPY) breaks 295-300, then the probability of a bear market beginning now has increased, and bounces should start to resemble “bear market rallies,” of which will be used to begin exiting longer term long positions.

Updating our paths, (1) [Probability=72%] SPY bottoms above 300ish and begins another round trip back to the 330s (in fact, we're still averaging into a long position for an expected swing back to at least the 330s), and (2) [P=28%] SPY continues to show bear market weakness and breaks 295ish.

Intermediate-term, two very different and distinct paths at the intermediate level:  (1) [Probability=40%] SPY continues to churn between 295 and 340s, and then a bear market arrives of at least a 20% correction (or possibly much worse), (2) [P=35%] SPY goes more directly to ATHs from these current lows near 300 and sees 400s on this multi-month path, and (3) [P=34%] SPY drops into a bear market now lasting months to years with a mover below the 290s.

Notes:  These paths are distinctly different because one sees a bear market beginning this year and the other sees something very bullish – I’m not a news guy per say, but the obvious catalyst could be tied to American politics this year of Trump vs. Democrat in the White House – I’ll let you ascertain which path is assigned to which party.

Further, intellectually I find this doubly interesting, because it would imply the Bayesian probabilities assigned to these intermediate paths could also be viewed as a proxy as to which political party wins the White House this year.  I could go as far to say that a plain Jane bear market of 20% versus much worse could even be assigned to the Democratic primary winner as each candidate has uniquely varying views on capitalism.

In metals, the BTS called this break higher, took profits, and continues to watch from the sidelines.   The two most likely paths at the swing level for SPDR Gold Shares ETF (GLD) are: (1) [Probability=39%] A continued bearish ugly reversal off the 2/24 highs, and (2) [P=37%] Another sharp move higher to new recent highs (but marginally so), and then another strong ugly bearish reversal, and (3) [P=24%] Generally something more bullish, as in correctively basing or running bullishly full speed ahead.

This is hardly a probability path that I want to trade with the increased volatility of late.  So it’s back to control FOMO, patience, and waiting to let the price action and Bayesian probabilities be our guide. 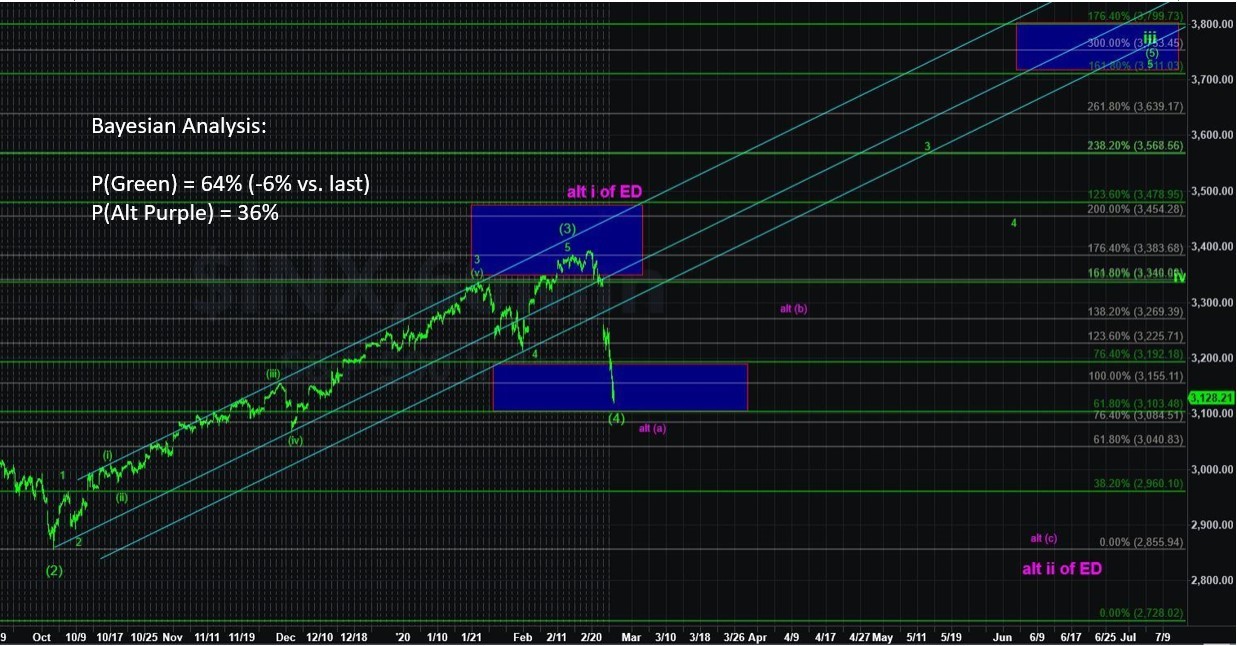